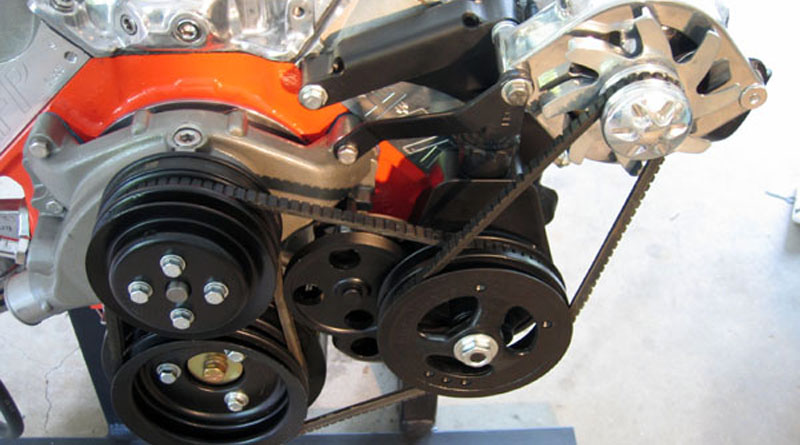 Well, it appears I’ve made a fair bit of progress over the past few weeks. Of course having a week of vacation thrown in the mix certainly helps as well. I’m really starting to wind down to the “minor details” at this point.

I started off by installing the temporary oil pressure and coolant temperature gauges that will be used during the motor’s initial startup. Sure, I only plan to run the engine for 5 minutes or so before taking it to the dyno shop (where they have their own gauges), but for the $20 the gauges cost it will be worth it to know that the engine is making decent oil pressure and that the coolant temps are reasonable. 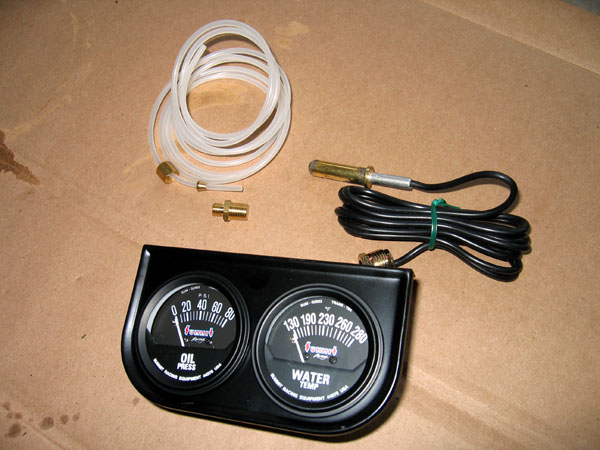 The installation of the oil pressure line was real simple. I cleaned up the original fitting that threads into the block, reinstalled it, installed the compression fitting that came with the gauge kit, inserted the plastic tube into the a sleeve fitting, along with compression collar, and tightened the nut down. A similar connection was made at the back of the gauge. 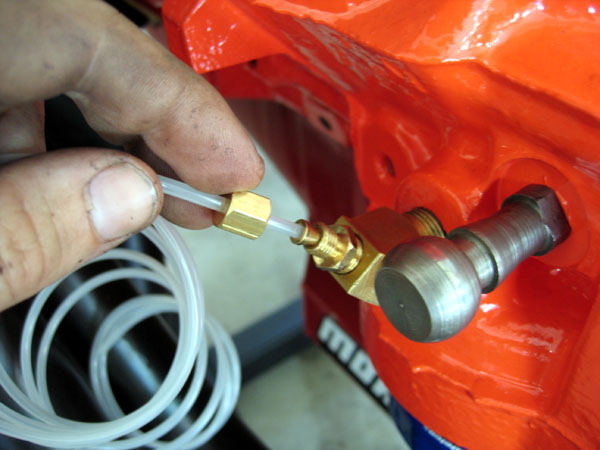 I ran into a bit of a snag when trying to install the temperature sensor though. It turns out that Air Flow Research heads don’t come with a pre-drilled temperature sensor port unless you specifically ask for one. Well, guess what – I didn’t ask for one… Bummer. I’ve thought about adding a port to the heads, but it would be a major effort to remove the heads in order to drill and tap a port at this point. For now I decided to install the temp sensor in the intake, it may not be as accurate as being directly in the cylinder head, but since I plan to run the motor without a thermostat I’m not real concerned about overheating or hot spots. The install of the temperature sensor was completed as shown below. 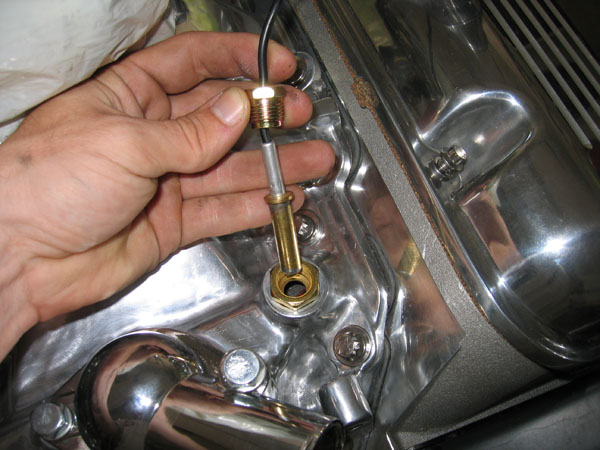 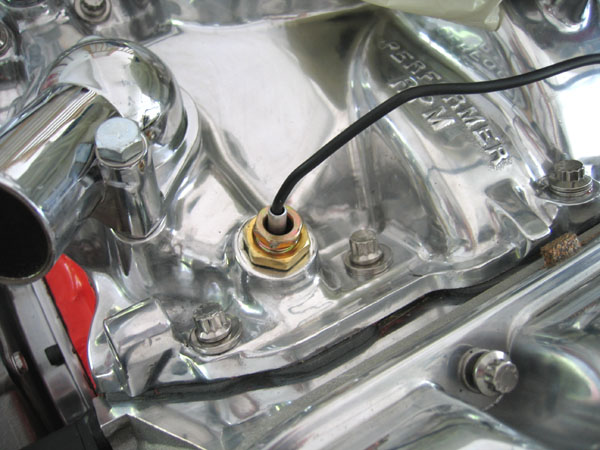 I positioned the gauge at the back of the bellhousing since it’s in an out of the way location with decent visibility. 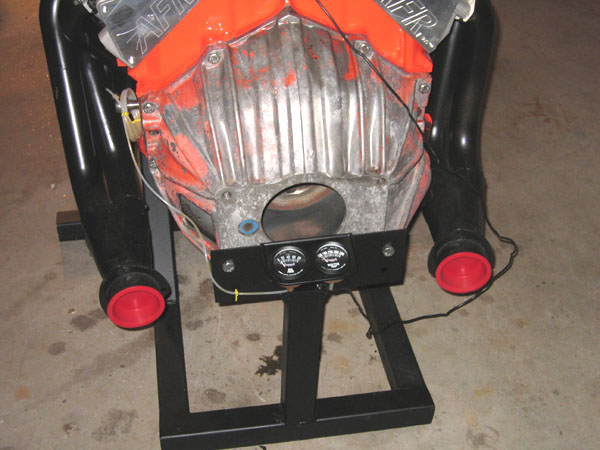 I finally got around to ordering a fuel pressure gauge and fitting so it’s time to get those installed and out of the way. 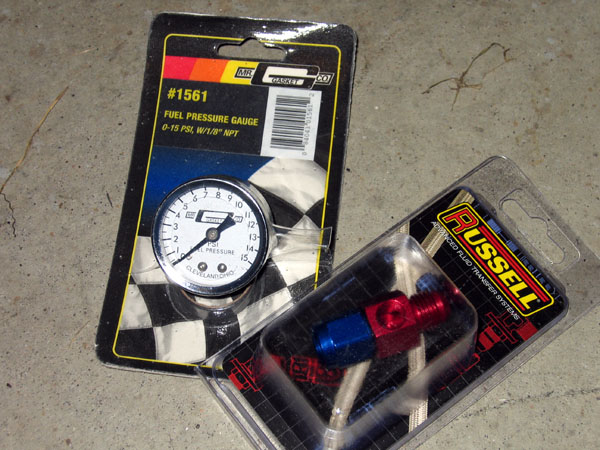 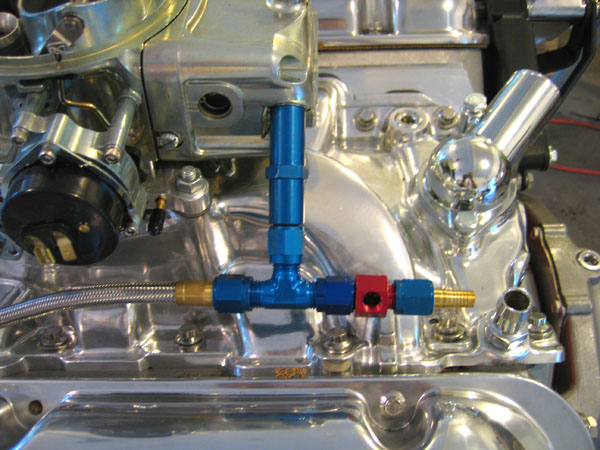 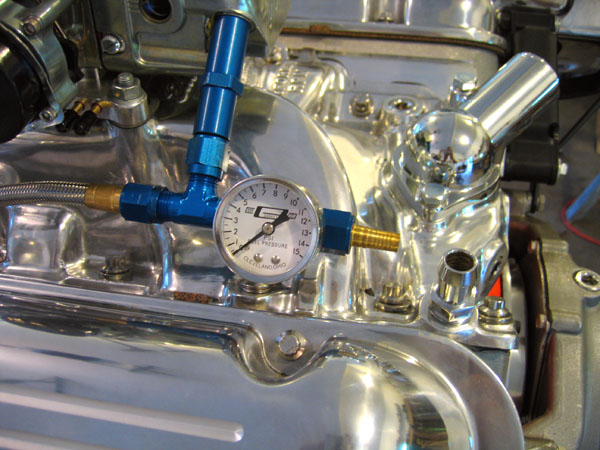 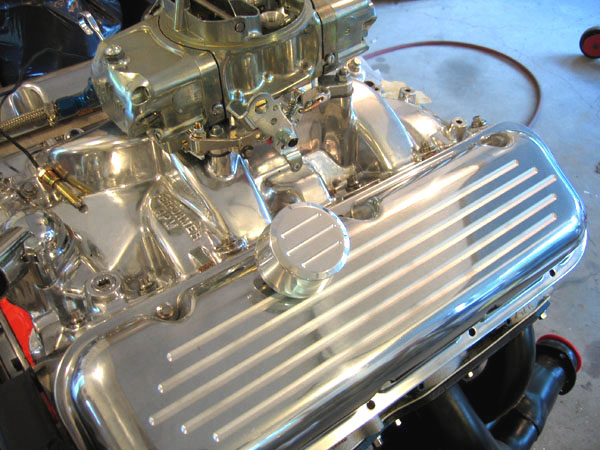 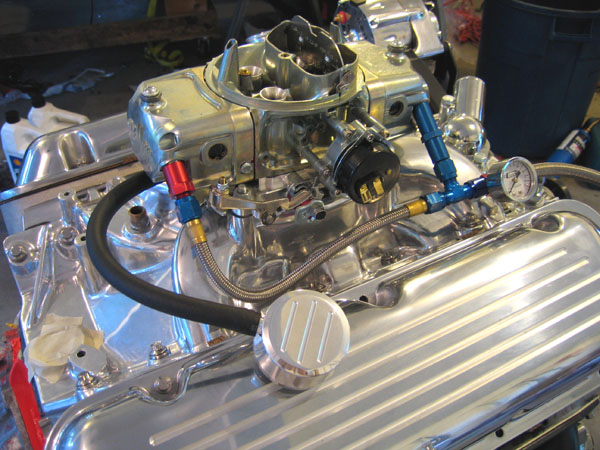 To complete my list of minor details a new oil filter was installed. Usually I wouldn’t bother mentioning anything as boring as an oil filter, but it gives me a great opportunity to post a link this Oil Filter Study. In the study they examine numerous brands of filters and make some interesting findings. Included are several recommendations for good filters, as well as a list of filters that should be avoided. I definitely recommend you check it out! As you can see, I opted for an ACDelco filter. 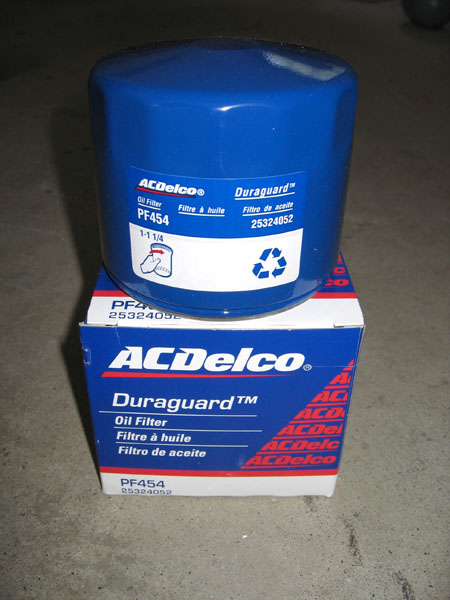 With the little stuff out of the way (for now), I moved onto getting the new alternator installed. I decided for an upgrade and purchased a 100 Amp polished aluminum unit. The stock alternator puts out around 60 Amps, plenty for a stock setup, but since I plan to use electric radiator fans it was necessary to upgrade to an alternator with a bit more capacity. 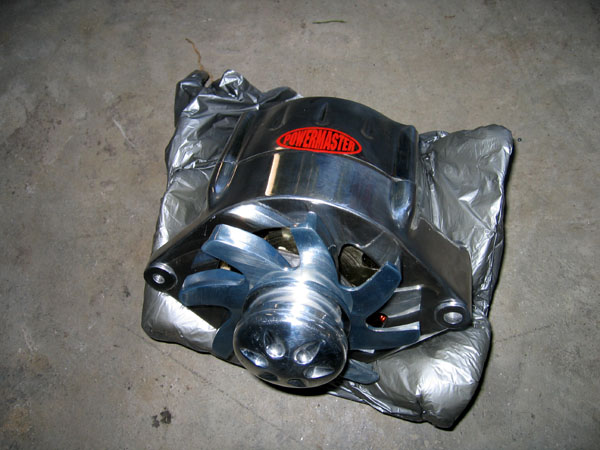 After installing the alternator brackets I attempted to install the alternator. However, I ran into two problems. First, the back of the alternator was bottoming out on the valve cover, and secondly, the outermost bracket was way out of position. As it turns out, these Air Flow Research heads (like many aftermarket heads) have raised exhaust ports. As a result the header studs are also raised. Since the alternator bracket attaches to the front header bolt it completely screwed up the bracket geometry. Guess I’ll have to do some more ‘customizing’… 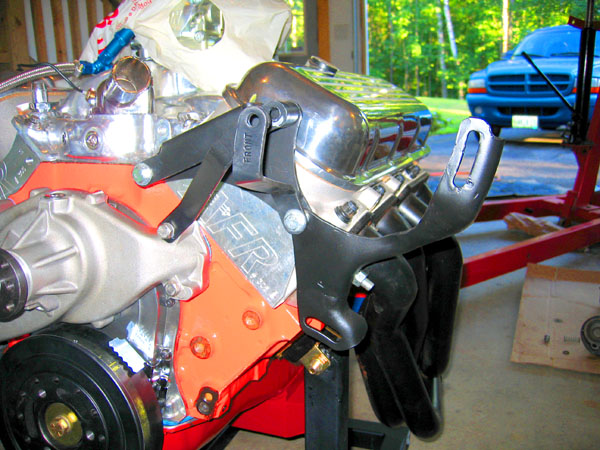 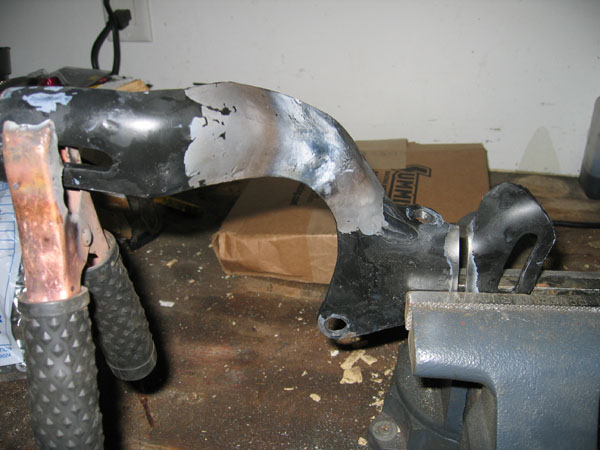 After welding the bracket back together… 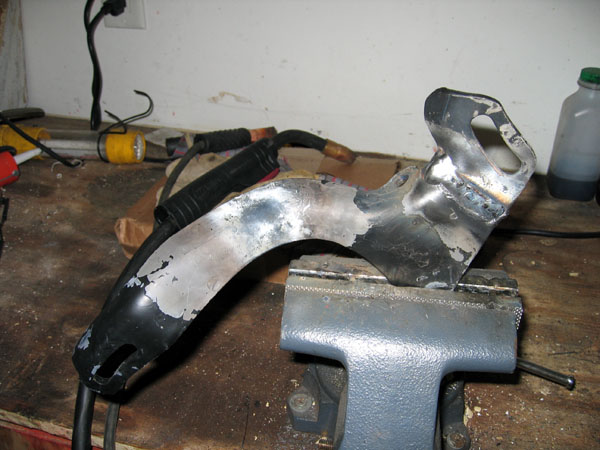 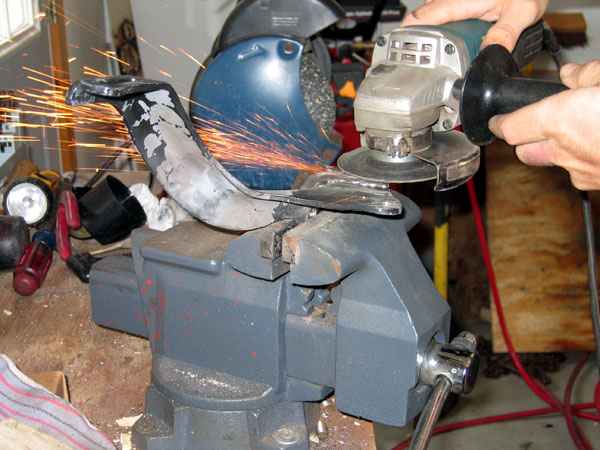 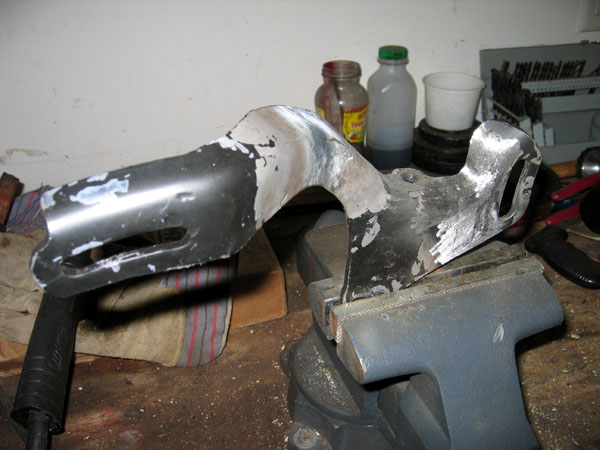 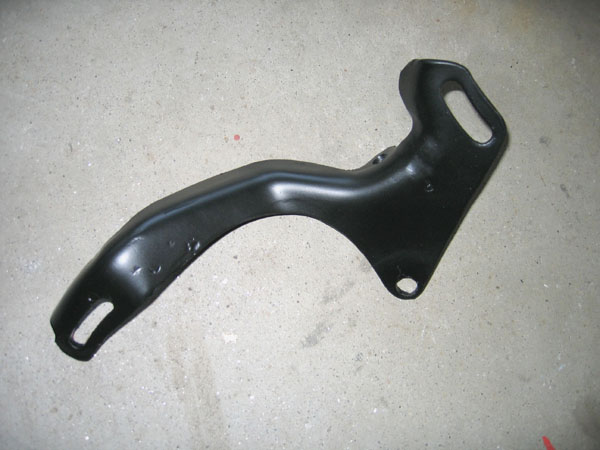 Modifying the alternator bracket did help with the valve cover interference issue a bit, but it didn’t completely resolve the issue. To eliminate the interference, I added a few flat washers between the bracket and the alternator. This essentially shimmed the alternator forward about 1/8″. As a result the pulley alignment is a bit off, but I think it’ll be ok. 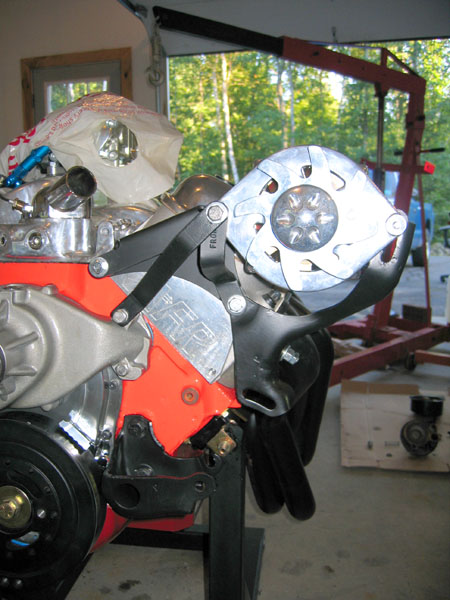 If you look closely you can see the washers that were used to shim the alternator. At some point I’ll come up with a better, more attractive solution, but this is a good ‘band-aid’ approach 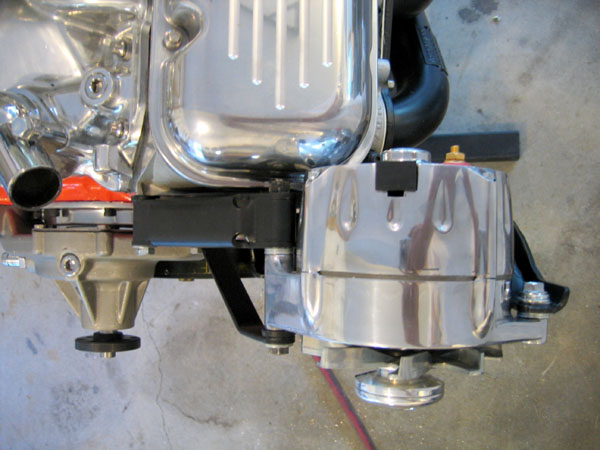 With the alternator installed I also installed the power steering pump, pulleys, belt tensioner and belts. As you can tell, the pulleys were all been cleaned and repainted prior to installation. 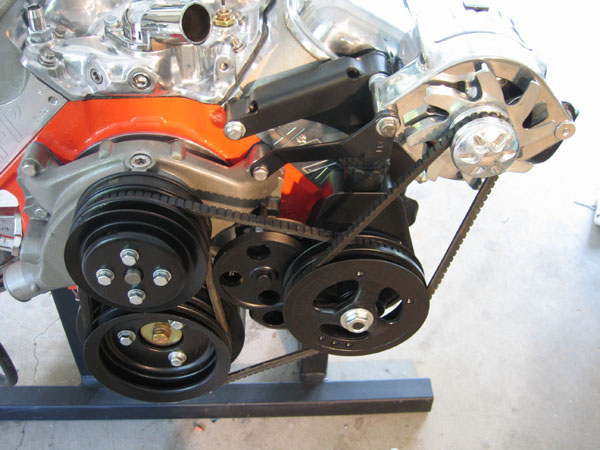 One last thing, since I didn’t want to burn up the power steering pump by running it dry, I installed a hose to the pressure union and fed it back into the reservoir. 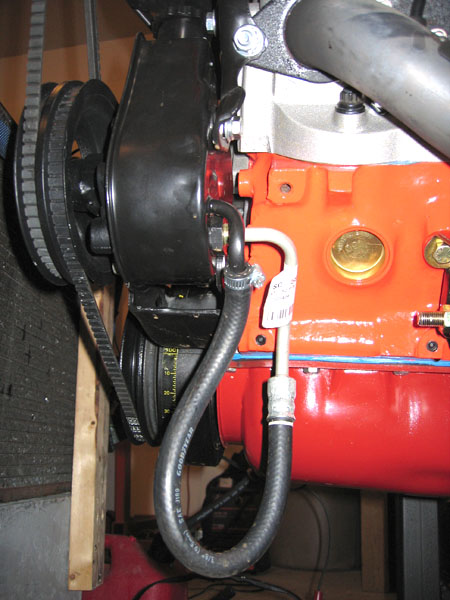 Well, that’s enough for now. Next week the motor will start! I’ll be sure to have my camera handy for the startup video – it should be exciting! If you have any questions I suggest stopping by the forum to say hello and to ask for any additional information you may need.