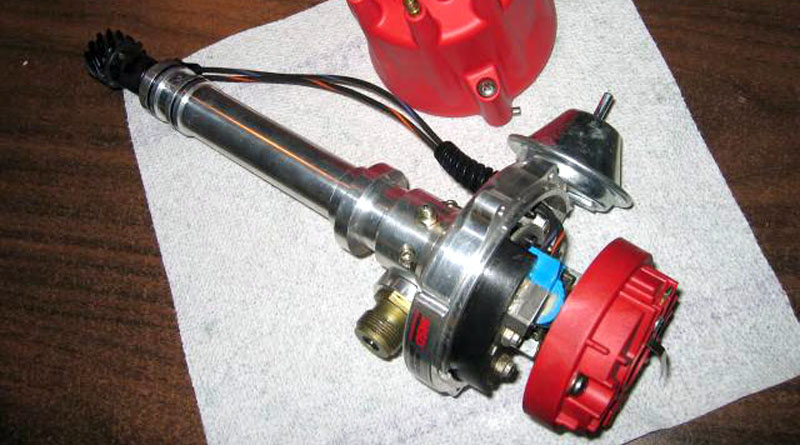 Just a few last things before it’s finally time to fire the motor. This update will include the installation of the ignition system. The old distributor that came with the motor was in pretty rough shape. After looking around a bit I ended up buying an MSD Pro-Billet distributor (part #8572) with vacuum advance and a mechanical tach drive off E-bay. I had hoped to get an HEI distributor, but couldn’t find a reasonably priced one with the mechanical tach drive needed for Corvettes. In addition to the new distributor, I also picked up a new coil, ignition box and plug wires. 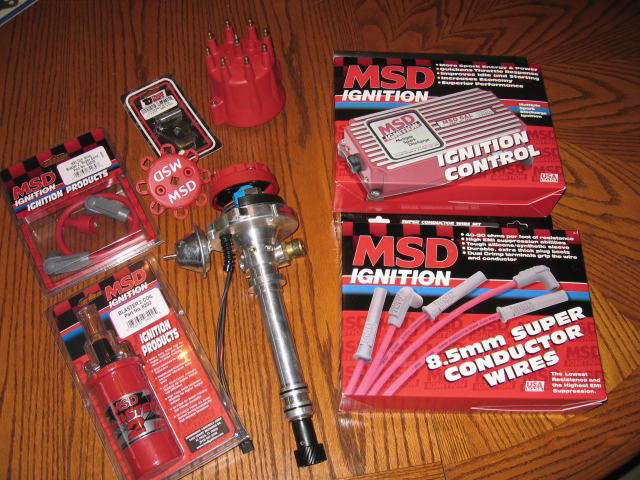 To start I went through the distributor and made a few adjustments. During this process I referenced a few timing papers that are provided on my Technical Links page. One thing I found pretty funny was that the previous owner of the distributor had the drive gear installed upside down. I ended up switching it around, if I hadn’t the drive gear wouldn’t have made contact with the drive gear on the camshaft. Somehow I doubt this distributor has seen much use! As far as the adjustments go, my goal is to end up with about 10 degrees of initial timing and 32 degrees of total timing for the break-in process (not including the vacuum advance). 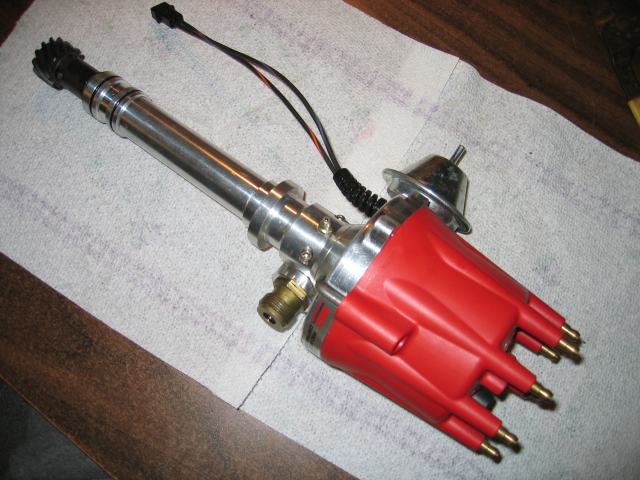 First I took off the distributor cap so that I could remove the rotor cap and get access to the advance springs. 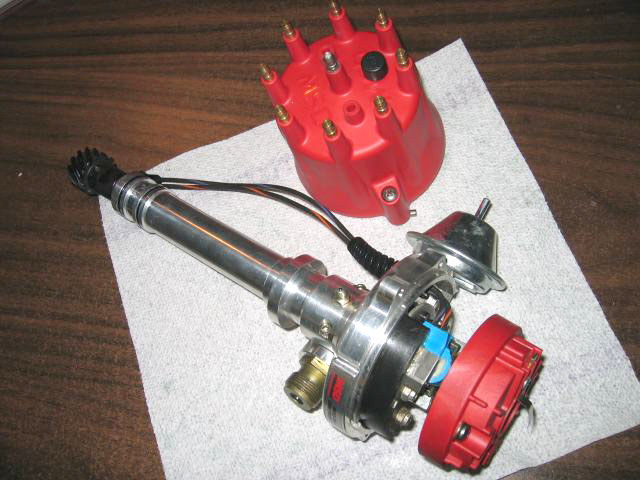 MSD shipped this distributor with heavy advance springs installed which create a very long (slow) advance curve. Since I’m building a performance motor, I’ll be replacing these heavy springs with some lighter ones so that the timing advances more quickly. 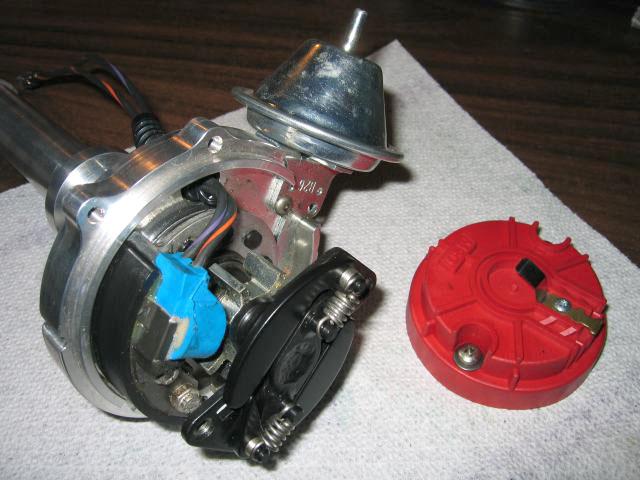 Chances are I could have went with two of the lightest springs, but I decided to be a bit conservative for now. When I get to the dyno shop I can change the springs out between runs and see what I get, it’s a pretty simple change. I decided on one light silver spring and one light blue spring. According to the instruction booklet that came with the distributor this will cause the centrifugal timing to be fully in by about 2400 RPM. I also installed a blue stop bushing which limits the total centrifugal advance to 21 degrees. So, between having 10 degrees of initial timing and 21 degrees of centrifugal timing, my total timing will be 31 degrees is pretty close to where I think I should be. 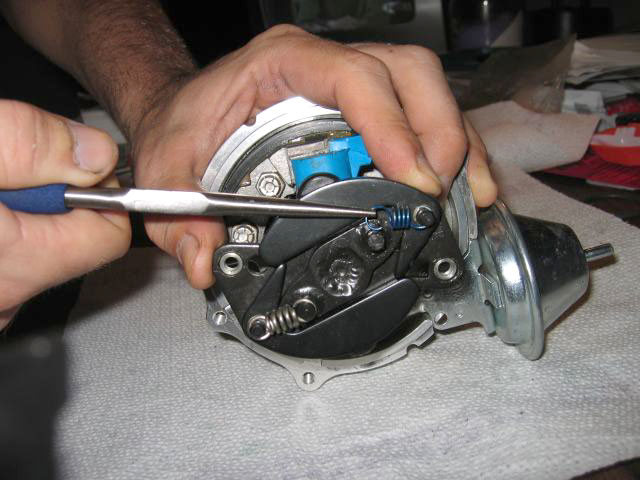 Next came the installation. After installing a new gasket the distributor was positioned and dropped into place. A bit of jockeying was necessary to get the distributor to slide down over the oil pump shaft properly, but things fell into place after a minute or two of playing with it. Next a new distributor hold-down was installed and tightened down to a snug condition (but not tight). Leaving the distributor snug tight will allow me to turn the distributor by hand when the engine is running and quickly adjust the initial timing. 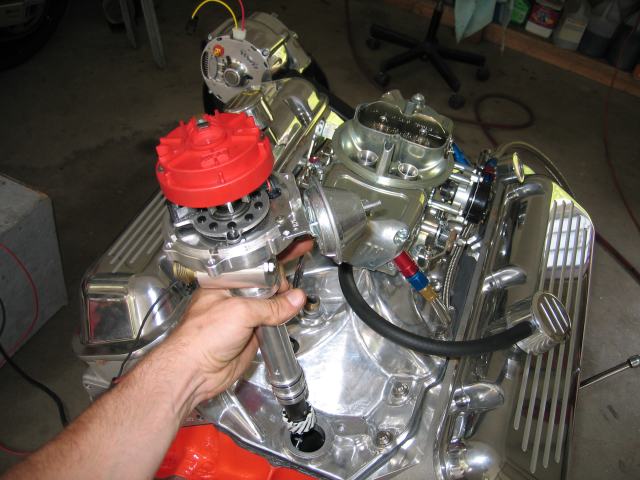 Next onto the spark plugs. To get maximum performance I decided to index my spark plugs. The concept of indexing is to position the spark plug so that the gap between the tip and electrode is facing toward the center of the combustion chamber. This allows the compressed air/fuel mixture to be ignited more quickly resulting in horsepower gains of 1 to 2%. Sure, it’s not a whole lot, but on this motor that means an extra 5 – 10 horsepower… To index a spark plug, the insulator body is marked with a permanent marker on the opposite side from where the ground electrode attaches to the spark plug body. When the plug is installed the goal is to have the mark on the insulator body pointing upward (so that the gap is facing upward). There’s some debate about whether the gap should be face the intake or exhaust valve to get the best gains, but I just wanted to be sure the open side was facing upward. If the spark plug is not in the proper position after it’s tightened down, indexing washers can be installed to fix this problem. Alternately, you can just try a different spark plug (which is what I did). I bought a few extra plugs anyway so, after a bit of trial and error, I was able to get most of them positioned pretty well. 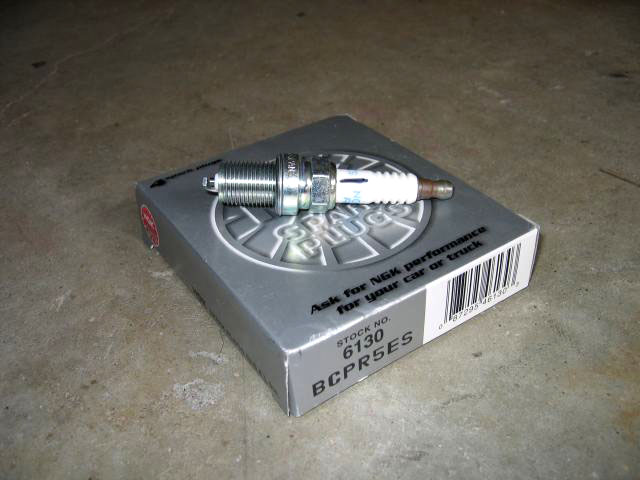 Prior to installing the plugs I also put a thin coating of anti-seize on the plug threads. 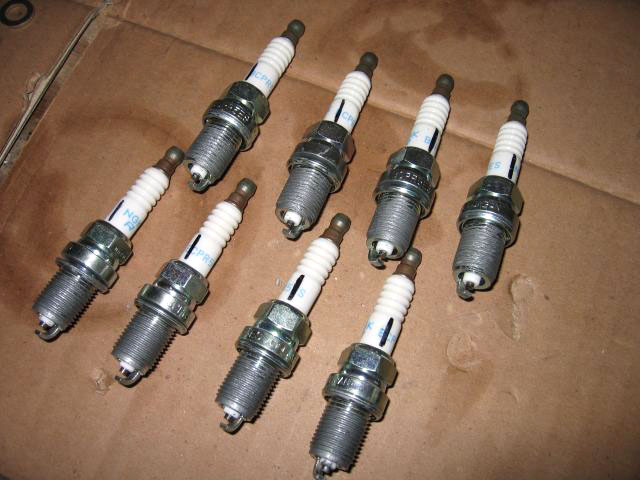 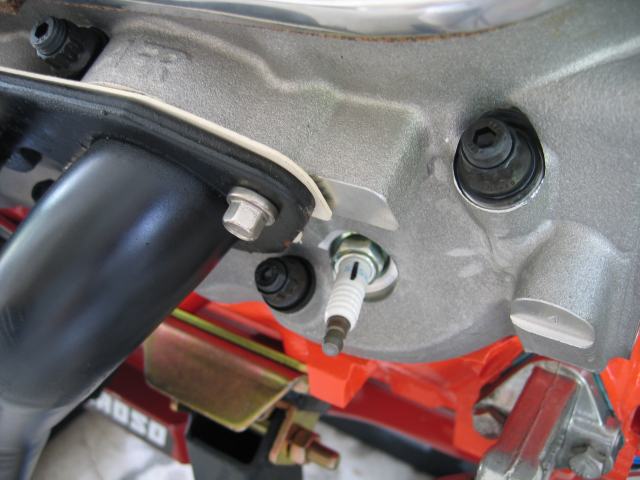 Fast forward a day or two and here’s the motor all hooked up and ready to be fired! As you can see, I’ve mounted up my old mufflers to the headers (to avoid deafening my neighbors) and installed the ignition box, starter, and plug wires. I also added toggle switches to run the starter and to kill the engine, hooked up the radiator and timing light, and got the fuel system all set up. 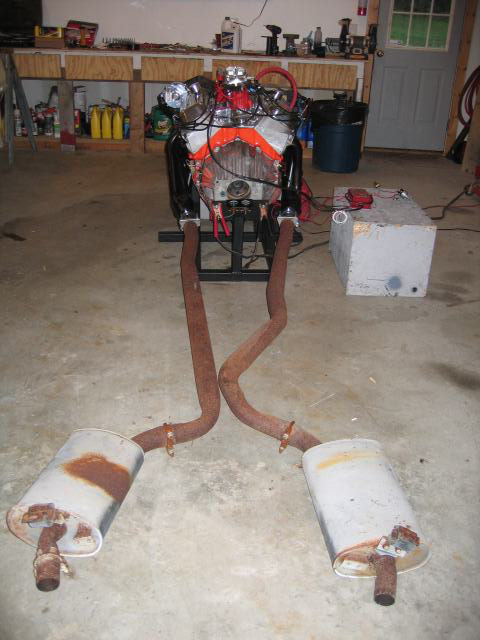 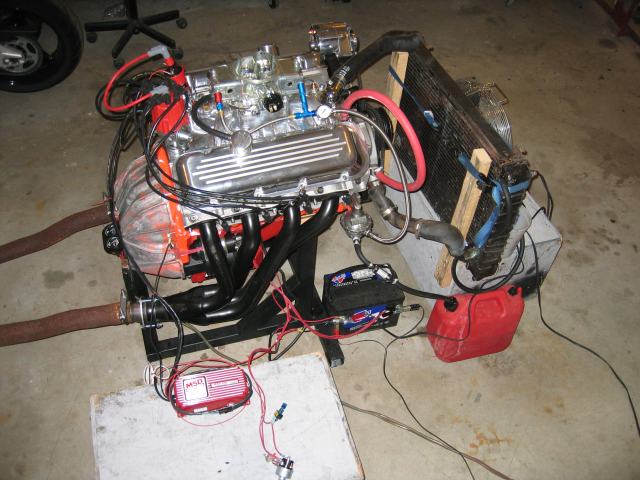 Well, at this point all I need to do is double check a few odds and ends, prime the carb and flip the switch. The next update should be real good, I’ll be sure to take a video or two of the startup!