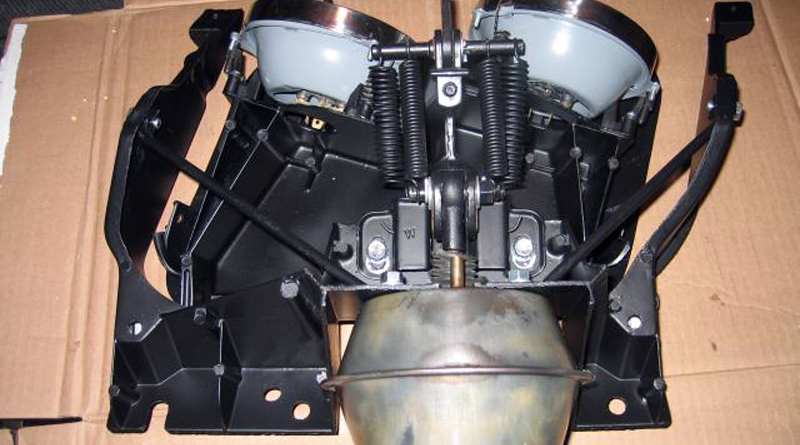 Well, progress on the car has been pretty slow lately. Actually, it’s almost been non-existent. Work has been keeping me extremely busy and the cold winter weather here in the Northeast has left the garage pretty cold making it tough to get any real amount of work done. Things will start picking up soon though now that spring is right around the corner. I’m not giving up that’s for sure!

Because the garage has been so cold lately I decided to do some work on the headlight assemblies. They’re pretty small so I just took them into the house to work on them – it’s a lot warmer than the garage! So here’s what I started with, one headlight assembly complete with paint overspray, rust, grease and grime. 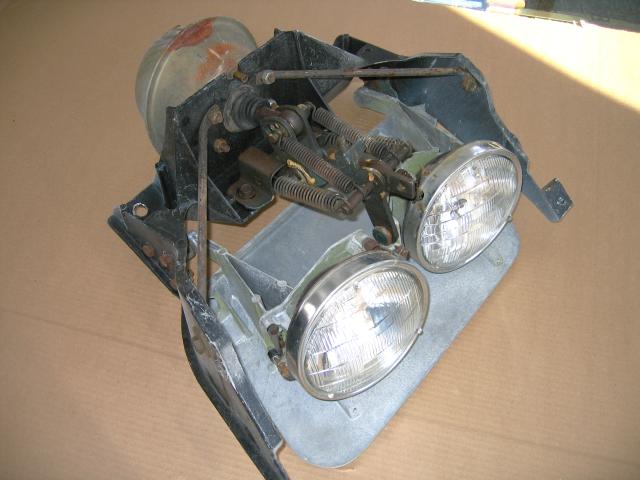 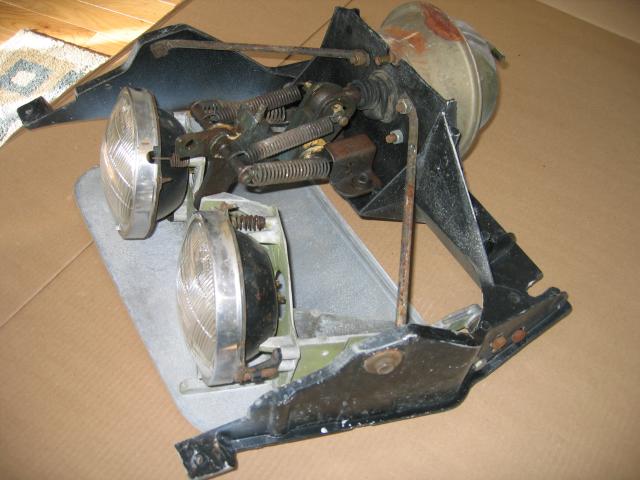 I made sure to take lots of photos before disassembly the headlight, I wanted to be sure I could put it all back together. Additionally I only took apart one light at a time, I wanted to be able to use the other as a guide if I couldn’t remember how something went back together. There are quite a few small parts, but the assemblies are pretty straightforward after you’ve spent some time playing around with them. It’s a pretty neat system too when you think about it. 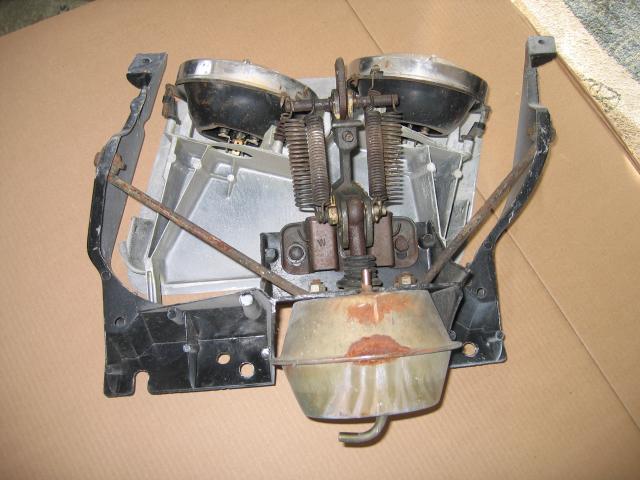 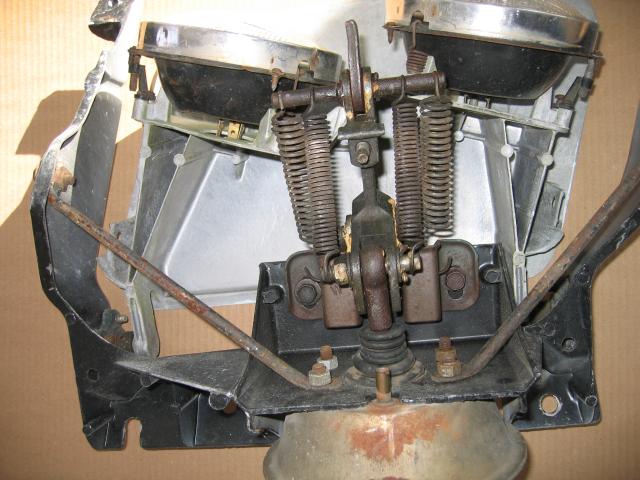 With the first headlight assembly taken apart I decided to tackle the vacuum actuator first. Sure, I could have bought a new one, but they’re pretty expensive. Since the actuator didn’t appear to have any vacuum leaks I decided to try and salvage this one with a bit of TLC and elbow grease. 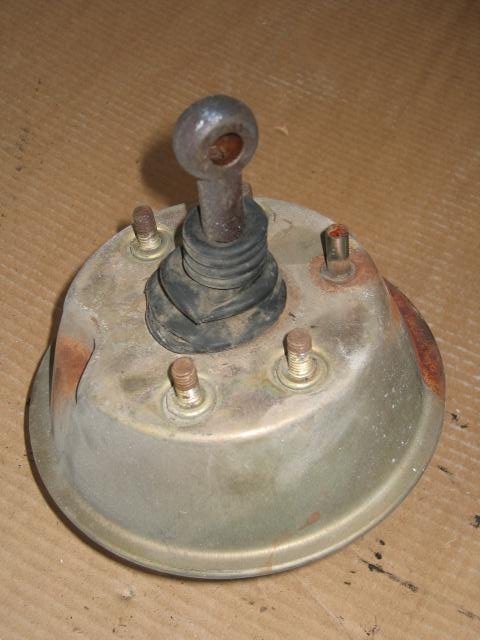 In order to recondition the actuator I had to first remove the rod end and dust boot. It took some effort to get the pieces apart, and little penetrating oil helped the process, but in the end I was able to get the two pieces apart without too much trouble. I thought of using some heat to help loosen the parts but I didn’t dare to. I figured it probably would have damaged the rubber dust boot. 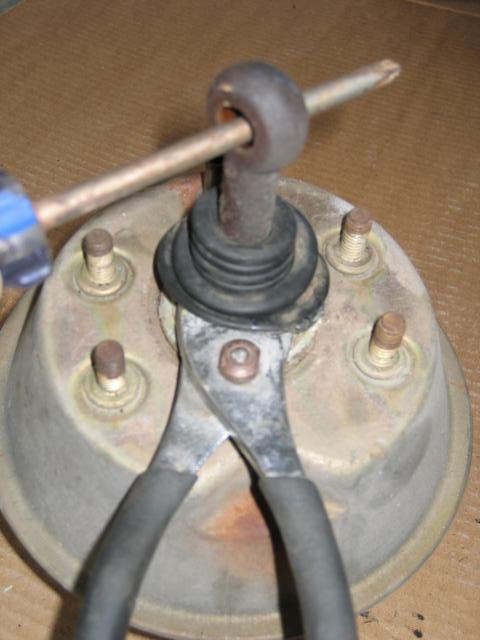 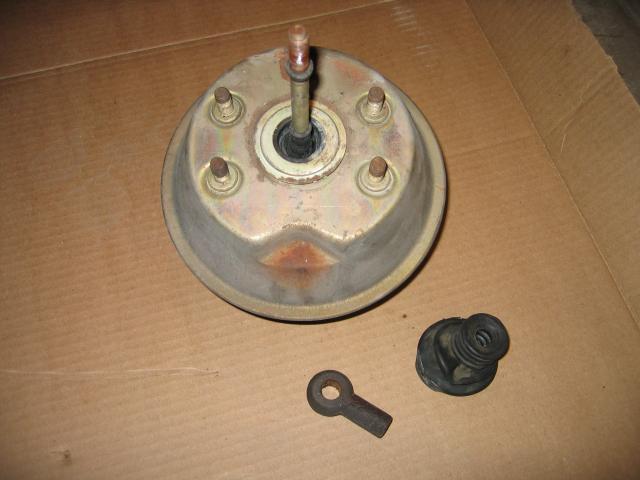 With the rod end and grommet removed I took to the actuator with a wire wheel to remove the dirt, grime and rust. After about ten or fifteen minutes it came out looking pretty good. I debated painting the actuator when I was finished but thought that a natural finish would look a bit better. To prevent the actuator from rusting I gave it a couple coats of clear spray paint when it was done. After finishing the actuator I also cleaned up and painting all the other parts that make up the headlight assembly, polished the headlight bezels, and bought new screws and bolts for reassembly. I figured it was a lot easier to just spend twenty bucks on some new hardware than trying to clean up the dozens of little screws and bolts that would have been needed. 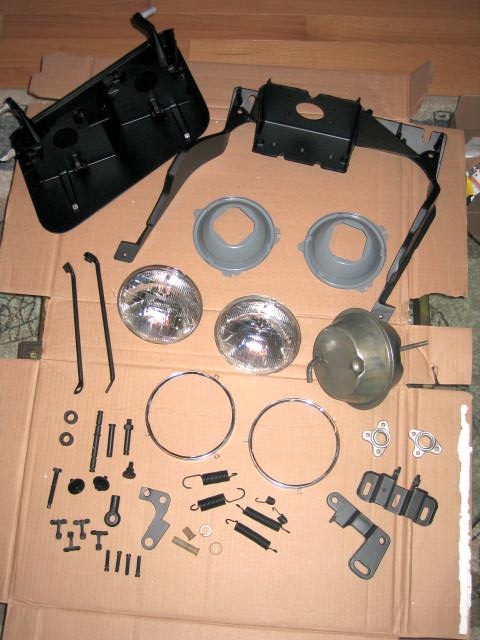 I was pretty impressed with how well the chrome headlight trim bezels came out. They cleaned up real well with a bit of polishing compound and my Dremel tool. The picture below shows a before and after picture of the bezels. 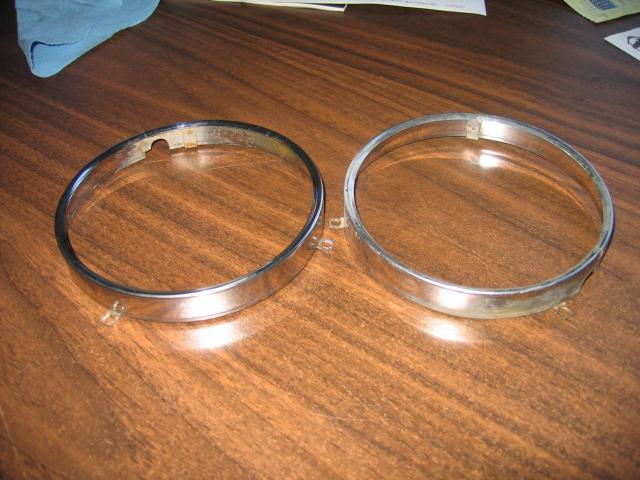 I did the same with the aluminum headlight housing bearings. I was pretty impressed with how they cleaned up too. Again, I shot them with some clear spray paint to help keep them looking good. 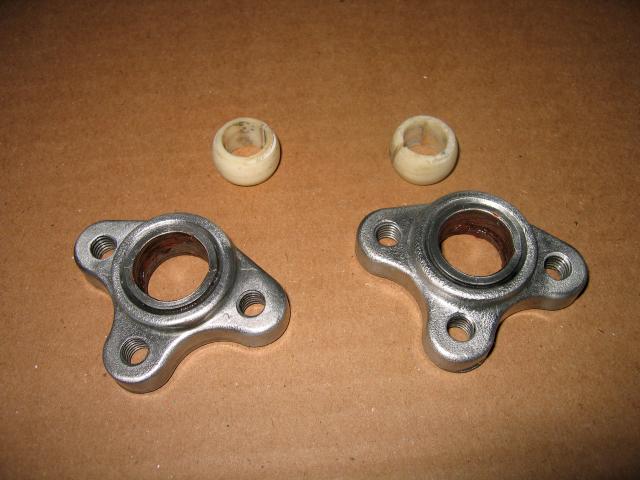 With all the parts painted, cleaned and polished it was time to start reassembling the headlight assembly. It actually went pretty well and wasn’t all that bad. Having the other headlight assembly on hand helped a lot, I referenced it several times along the way. 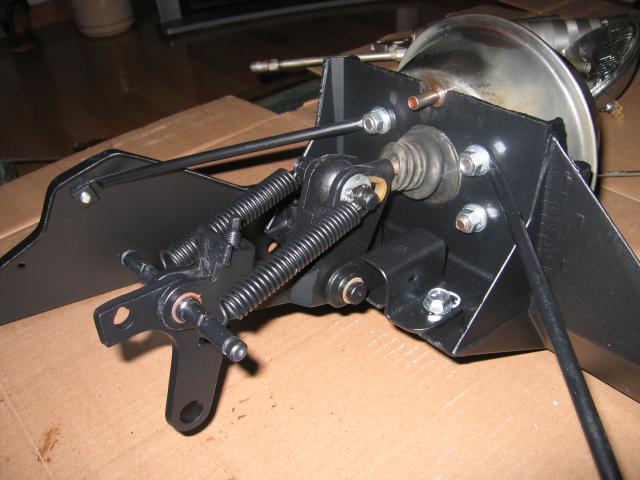 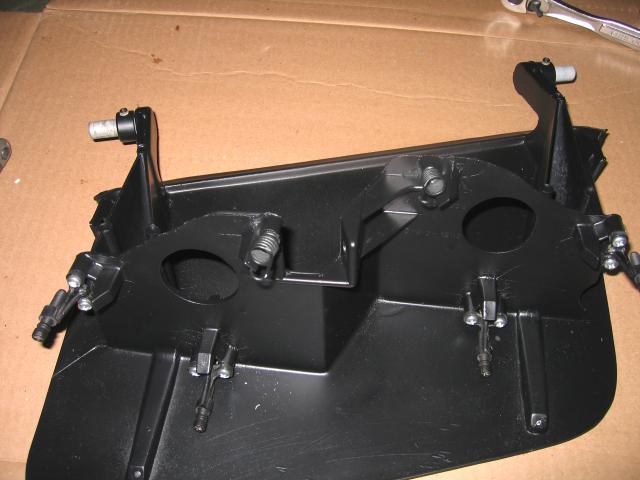 Originally the headlight rings were painted black, but I decided to repaint them a shade of gray for a little bit of contrast. I figured at this point it really doesn’t matter anyway – the concept of an NCRS restoration went out the window a long time ago. 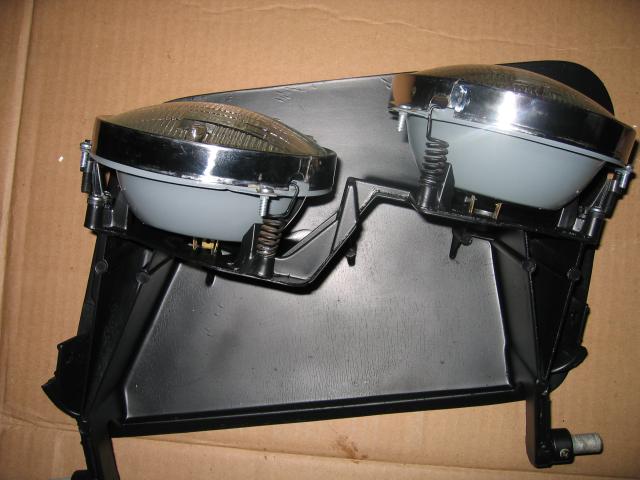 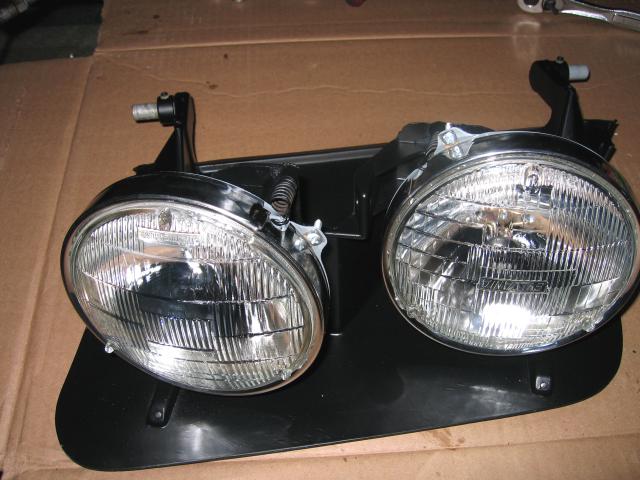 And here are a few photos of the completed headlight assembly. I still need to do some final adjustments, but it’s probably only another half hour or so per light once I get them reinstalled on the car (which will be after the car is painted). Until then they’ll just have to sit around and wait for the rest of the project to be ready. 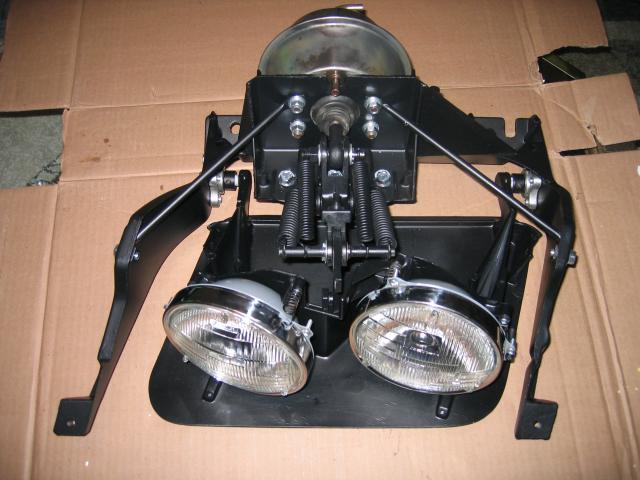 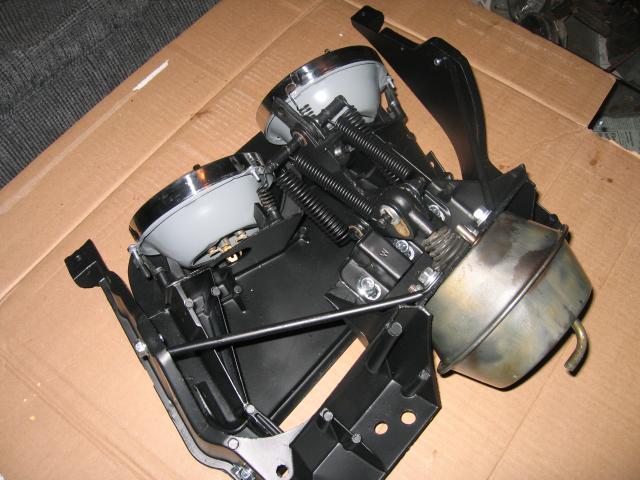 I was a bit skeptical about how the assembly would come out looking, but all in all I’m pretty happy with the results. The before and after pictures below really show the improvement. Wow! 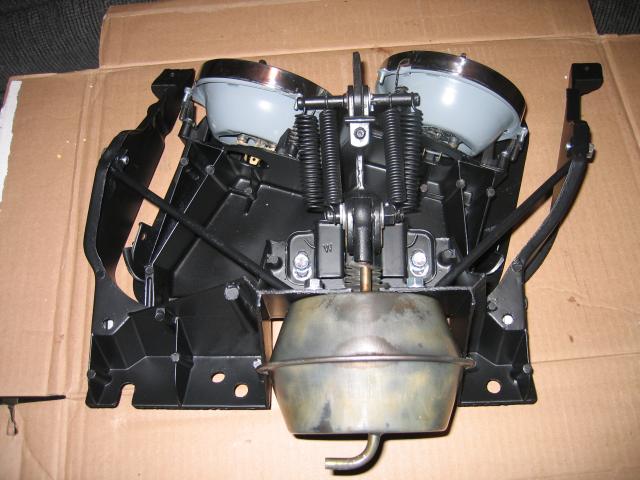 In the end I spent about 8 hours working on this one assembly. Now I just need to finish the other one. I’ll be working on that over the next few weeks, and after that who knows what’s next. Look for another update in about one and a half to two months! In the meantime, stop by the forum to say hi and share your own project progress! I know I’m not the only one out there restoring a C3 Corvette!