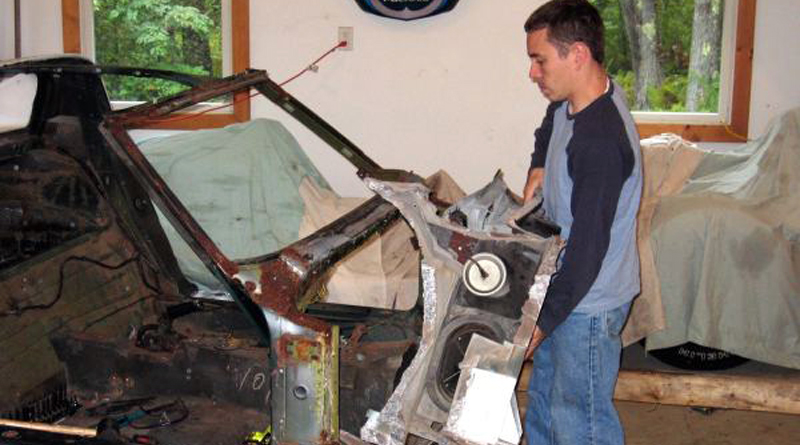 The firewall is attached to the windshield frame using a combination of rivets, bonding compound (similar to what was used to attach the front clip to the firewall) and non-hardening adhesive/sealant. 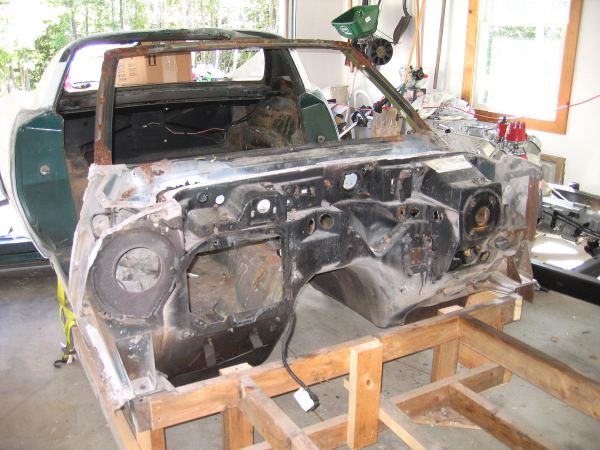 A quick double check of the firewall before starting work turned up a good find. It turns out the hood release lever bracket was never unbolted from the door pillar so I took a quick minute to unbolt the bracket and set it aside. I checked the rest of the firewall and didn’t find any other components that were attached to both the firewall and birdcage. 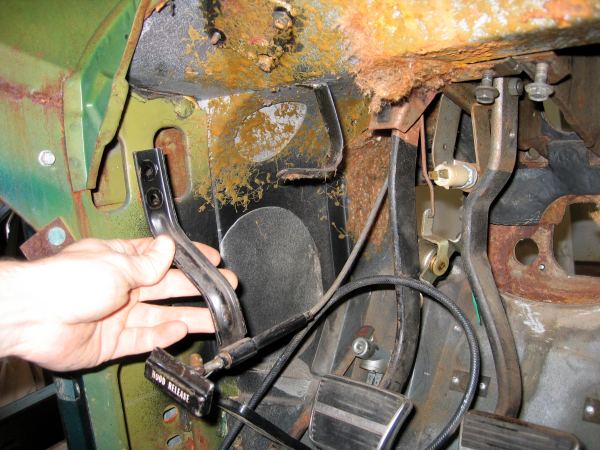 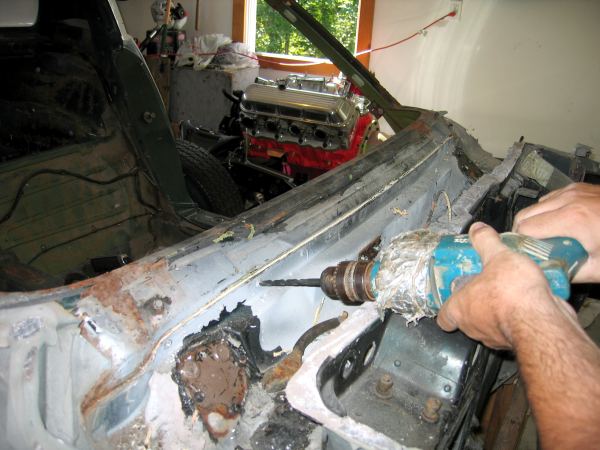 With the rivets drilled out I started working on separating the top of the firewall from the birdcage using my 5-in-1 tool and rubber mallet. Thankfully the material used here isn’t nearly as tough as the bonding compound that was used to attach the front clip to the firewall. Instead I’d compare it to a rugged non-hardening sealant. 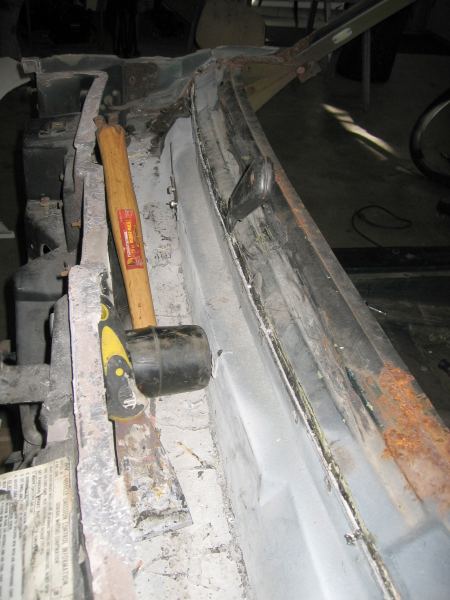 After about a half hour of work I was able to get the top of the firewall separated from the bottom of the windshield frame. 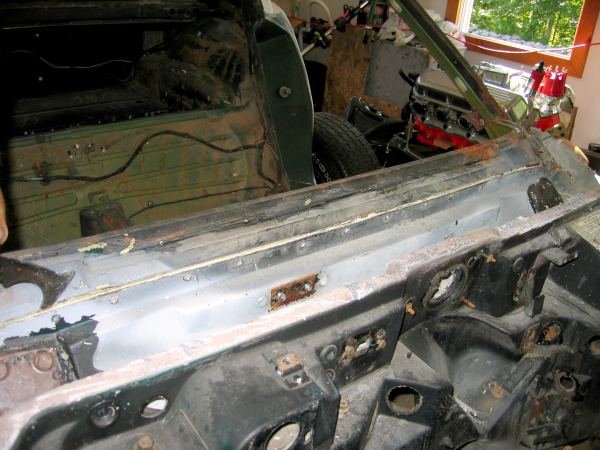 Next I focused on releasing the firewall from the door jambs. Similar to when I removed the front clip, I started down near the bottom of the firewall using a putty knife and soft mallet and worked my way up. As noted above there are several rivets attaching the firewall to the door jambs so be sure to drill those out before trying to separate the two pieces. 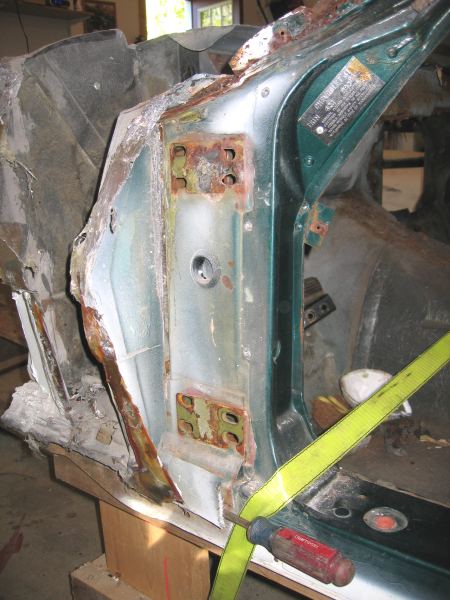 To help identify the rivet locations I’ve provided the photos below to illustrate the connection points (these photos were taken after the firewall was removed). Some of the rivet locations are well hidden when everything is together so you have to look for them pretty closely. Red arrows represent rivet locations, blue arrows indicate surfaces that receive non-hardening sealant and green arrows indicate surfaces that receive bonding compound. Here’s the top surface of the lower windshield frame corner (drivers side): 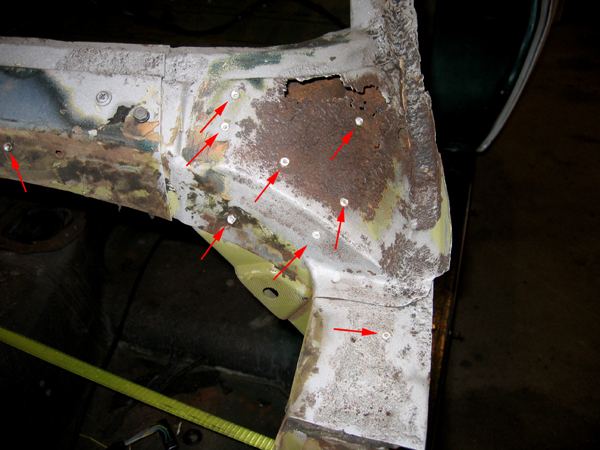 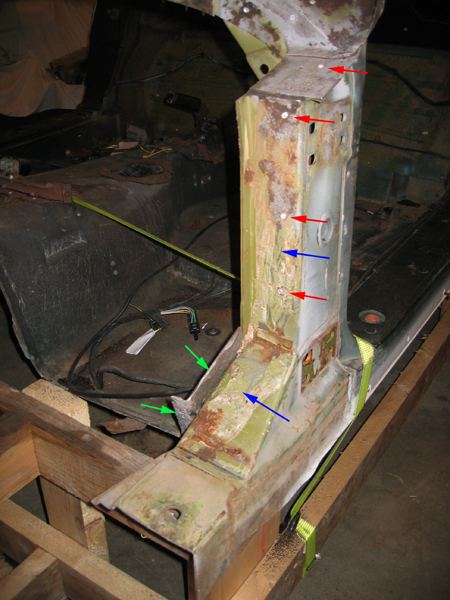 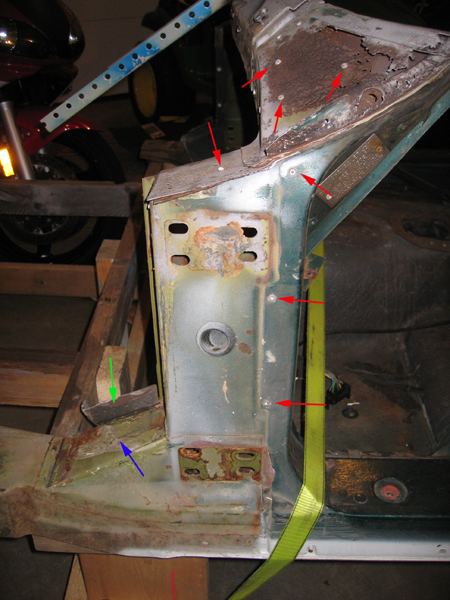 Once the top and sides of the firewall were released the next and final step was to separate the bottom portion of the firewall from the body floorpan. The photo below was taken from underneath the center of the car where the transmission normally goes. The red arrows are indicating the joint where the firewall is attached to the floorpan. Fortunately, this seam is pretty easy to separate since it’s made up with the non-hardening sealer. 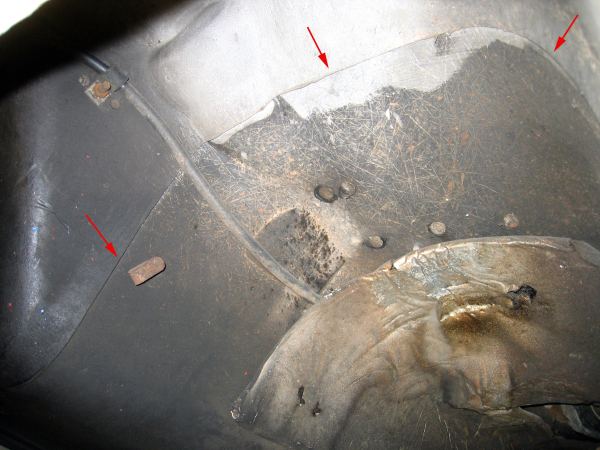 With all the the attachment points released, the firewall basically ‘fell away’ from the birdcage with a slight tug… 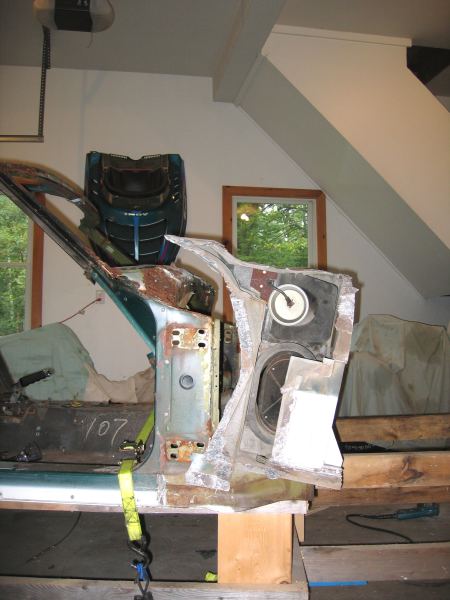 …and was easily lifted up and out of place. The firewall is large and cumbersome but only weighs about 60 pounds so it’s fairly manageable to remove it with one person if you take your time. 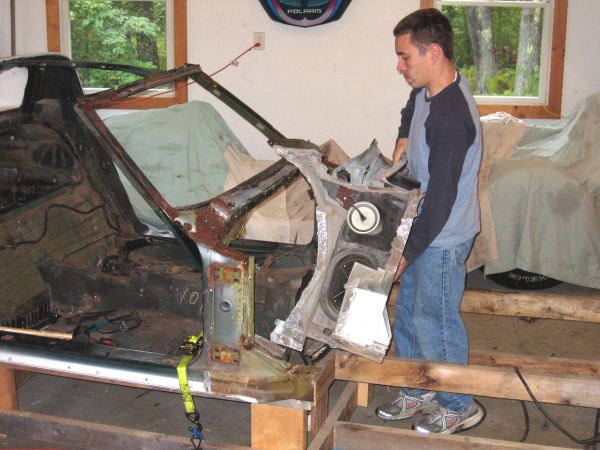 Below are two close-up shots of the area where the firewall attaches to the frame and floorpan just ahead of the door jamb. This area was probably the most tricky to get released simply because of the odd angles that need to be followed. 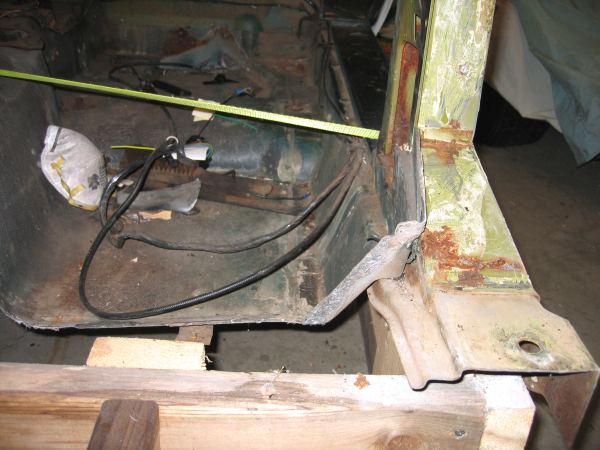 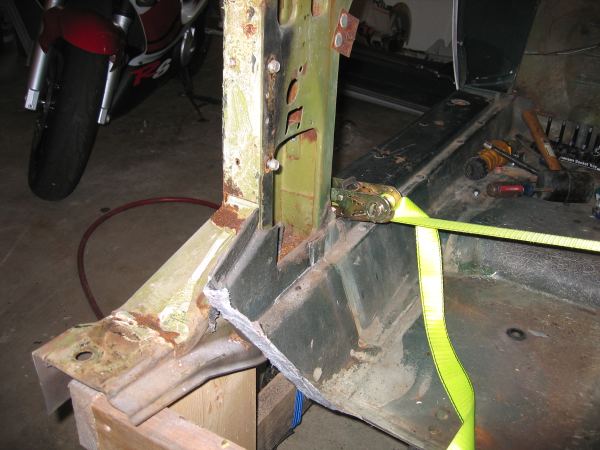 So, after a few hours work here’s the car with the front clip and firewall completely removed. 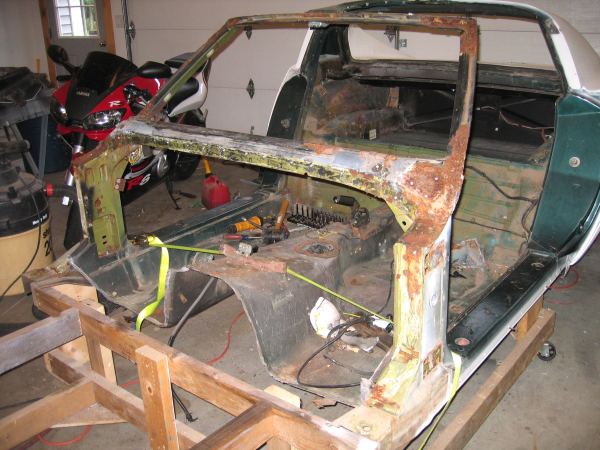 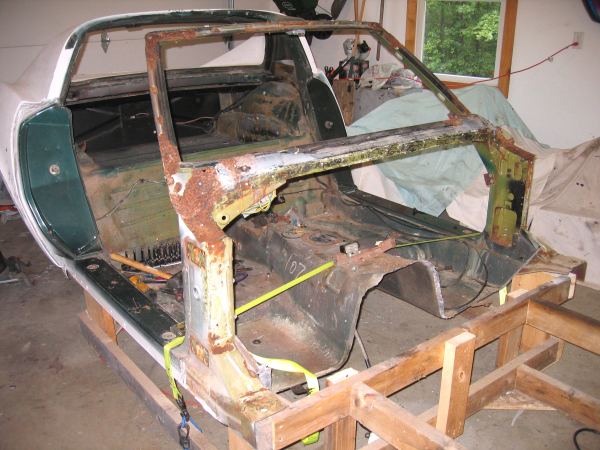 And here they are, the lower corners of the windshield frame after I cleaned them up a bit with a wire wheel. With the front clip and firewall removed it became pretty apparent that I have my work cut out for me… 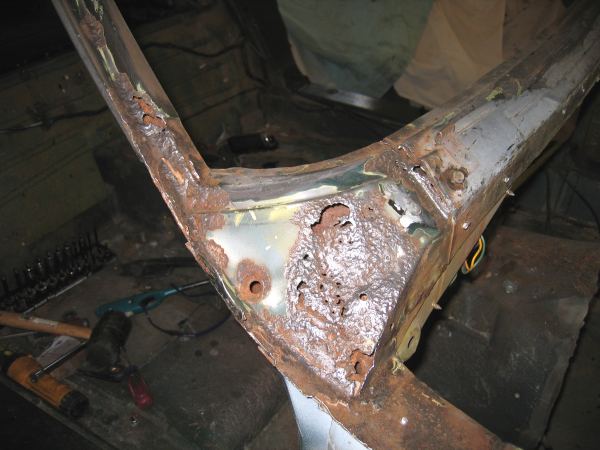 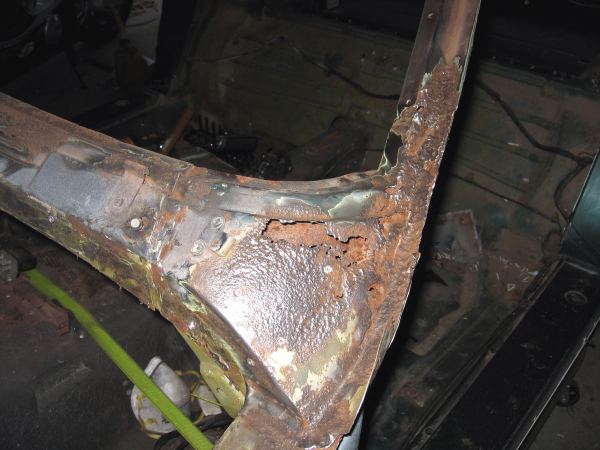 …and don’t forget about the upper windshield frame corners, those will need some attention too! 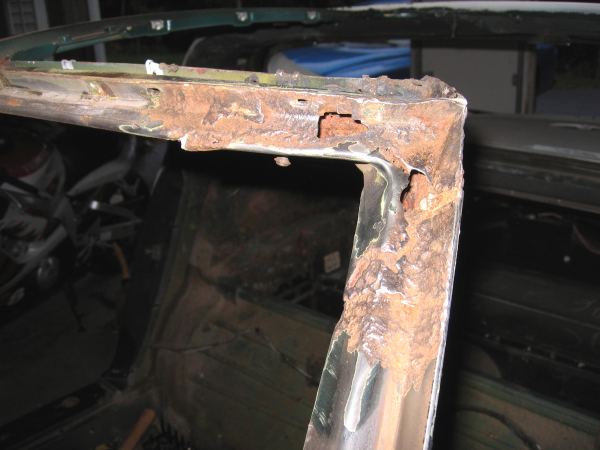 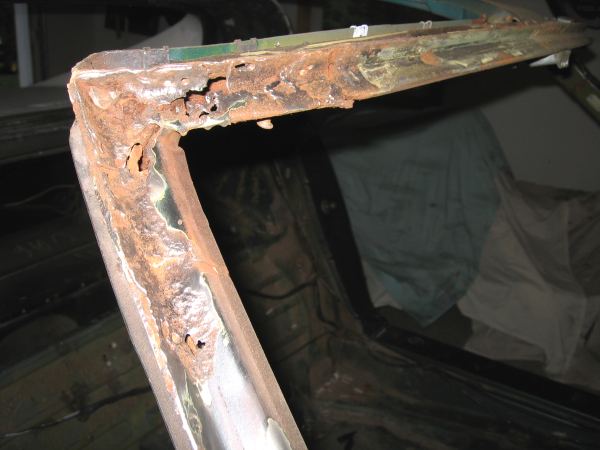 That’s it for this installment. Check back soon for my next update where I’ll tackle some of the areas of rust and corrosion on the birdcage and windshield frame!