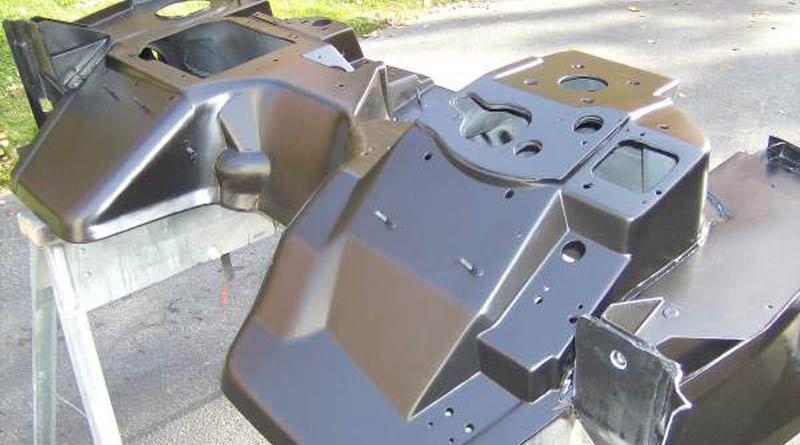 In the last update repairs were made to the firewall and a coat of epoxy primer/sealer had been applied. However, the finish wasn’t quite what was wanted – a few too many gouges and imperfections remained which really detracted from its appearance. 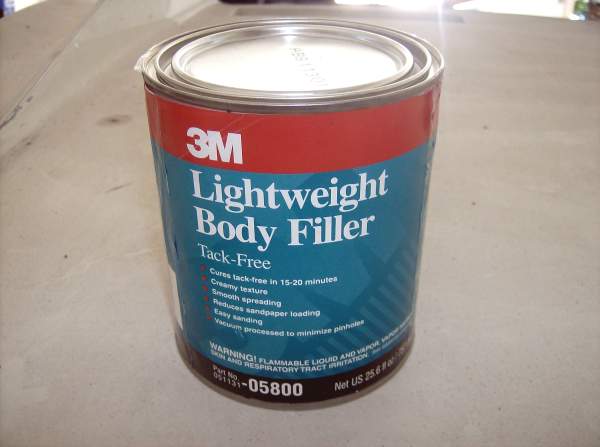 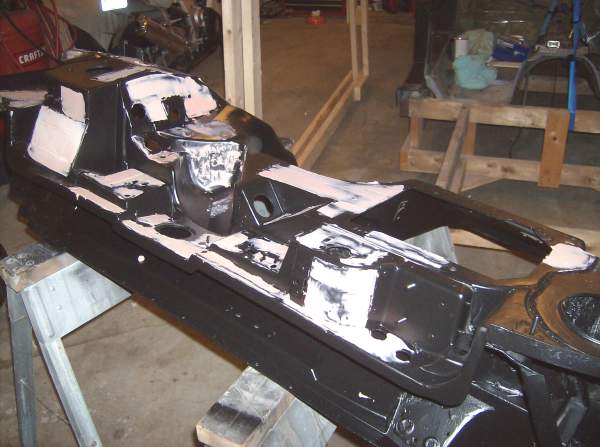 Once the body filler was applied and sanded smooth there were still numerous small imperfections that needed to be filled. To fill these I opted to use a high build sanding primer. I looked into several products and decided on Nason SelectPrime. Nason is Dupont’s generic line and, for the price, is a decent product. 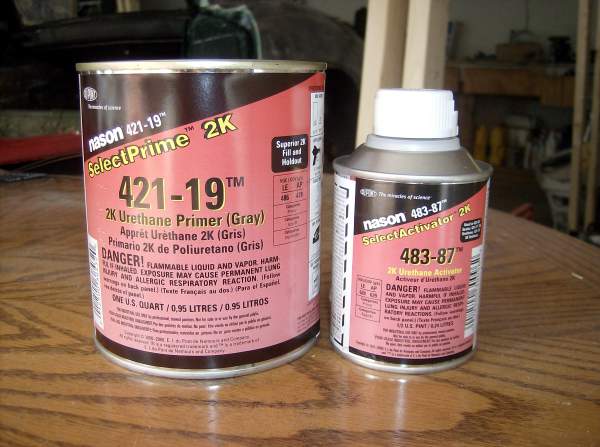 After taping off the firewall to avoid getting primer where it wasn’t wanted, followed by a thorough cleaning, the primer was applied in three medium coats allowing for the required flash time allowed between coats. Note I’m only trying to smooth out the engine bay side of the firewall here. 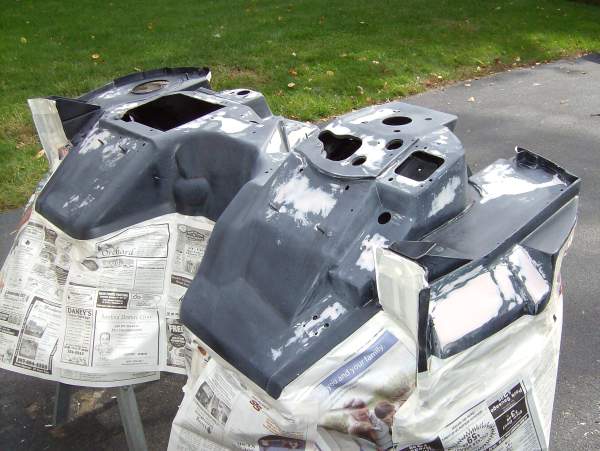 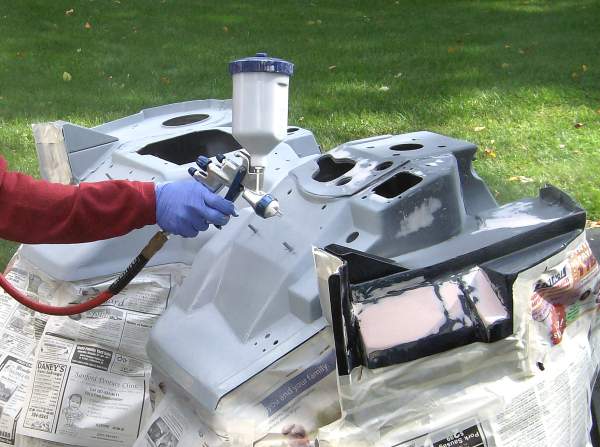 After curing overnight the entire firewall was first sanded with 180 grit sandpaper followed by 400 grit sandpaper. The sanding primer really helped cover the remaining small imperfections and the resulting finish looked very nice, even without the finish coat of paint.

For the final coat of paint I was torn between using a top coat urethane or the same PPG DP40LF epoxy/sealer I’ve used on the windshield frame and for the base coat on the firewall. Ultimately I decided on the PPG DP40 for two main reasons. First, it provides the exact semi-gloss sheen I’m looking for. Had a urethane paint been used I would have needed to experiment with adding flattener to achieve the desired sheen. Secondly, I still had some of the DP40 floating around and using what I had on hand was preferable to buying more paint.

Typically you wouldn’t use an epoxy primer/sealer as a topcoat since it’s prone to chalking over time if exposed to sunlight. However, in the engine compartment this is only a minimal concern.

So, after a final wipe down with cleaner, three finish coats of PPG DP40 were applied. The end result was much nicer than the first time around; those additional 16 hours of filling, sanding, priming, and smoothing really made a difference! 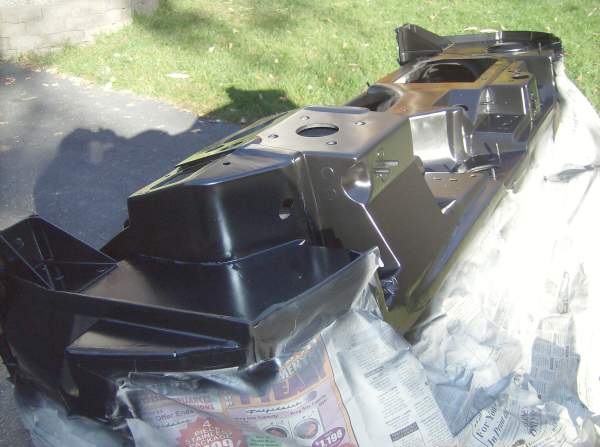 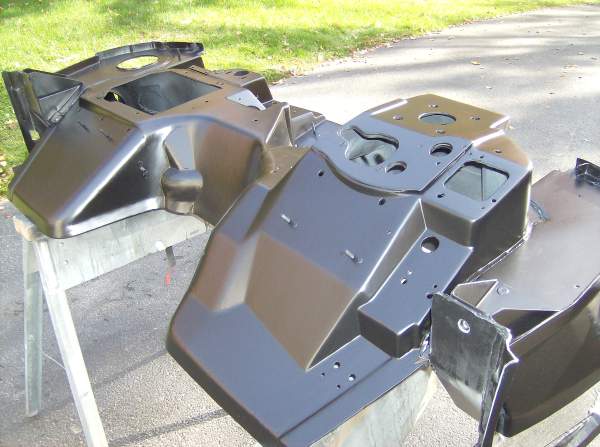 The last item left to be addressed on the firewall was treating the inside of the windshield wiper tub. After removing all of the bituminous coating there were numerous small nicks and gouges left over that were a bit unsightly. Certainly I could have used lightweight filler in this area to smooth things out, but the area is tight and I didn’t really think the payoff would be worth the hours and hours of extra sanding. Plus, who’s really ever going to see inside the wiper tub? In the end I selected a spray in truck bed liner product that would provide some texture and would help mask most of the minor imperfections. 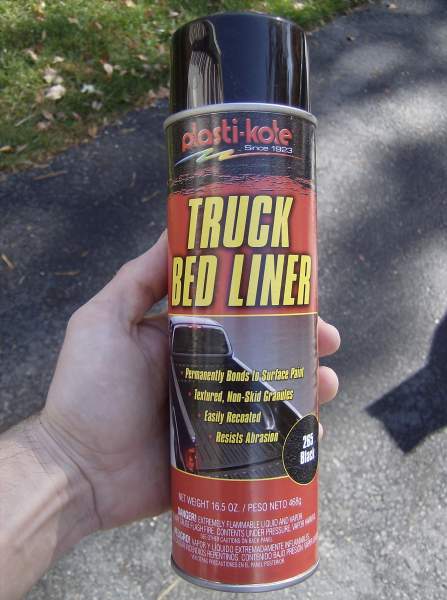 After sealing any visible seams in the wiper tub with a roofing sealant, several coats of the bed liner product were applied. One note of caution: be sure to mask off any areas you don’t want overspray to get on, this stuff can get everywhere.

Overall I was very pleased with the finished product. 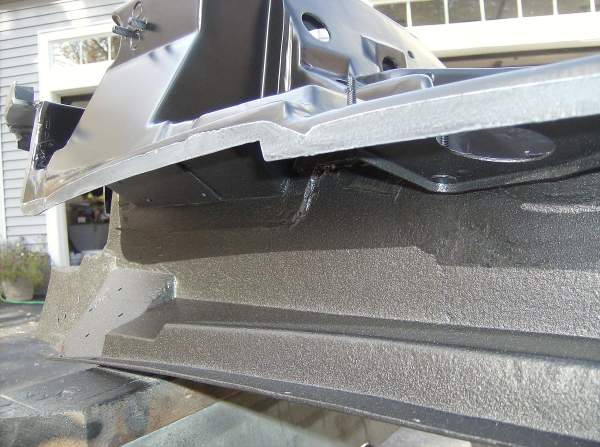 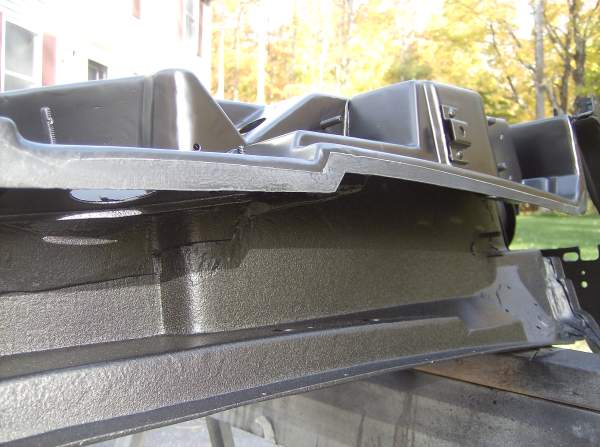 And here it is, the painted firewall! I would never have guessed it would take me over 40 hours to get here, but it did. What remains on this task is cleaning up, painting, and reinstalling all the miscellaneous clips, mounting plates and gizmos that had to be removed from the firewall. It will be tedious for sure, but it all needs to be done nonetheless! 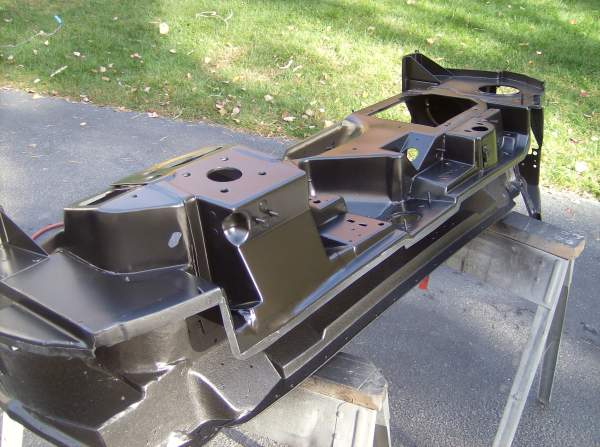