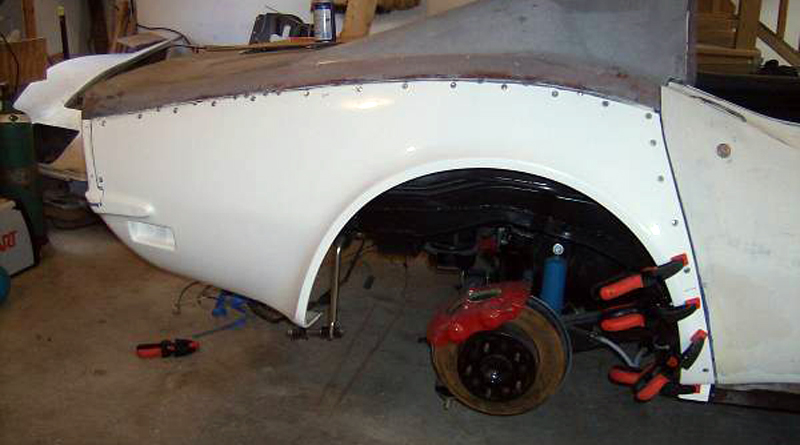 With the new Corvette tail light panel installed only two panels remain to be installed on the rear clip – the new passenger side quarter panel and the new lower valence panel. 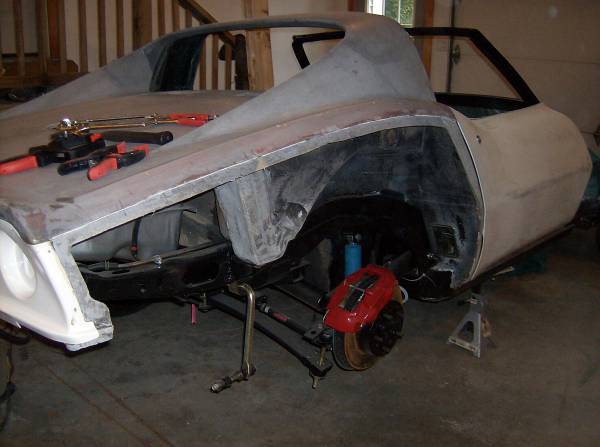 Similar to the other fiberglass panels purchased for the project a hand layered replacement panel was bought. Although hand layered panels are not factory correct, they tend to be much more affordable. Whereas originality is not a concern on this project this tradeoff seemed reasonable. 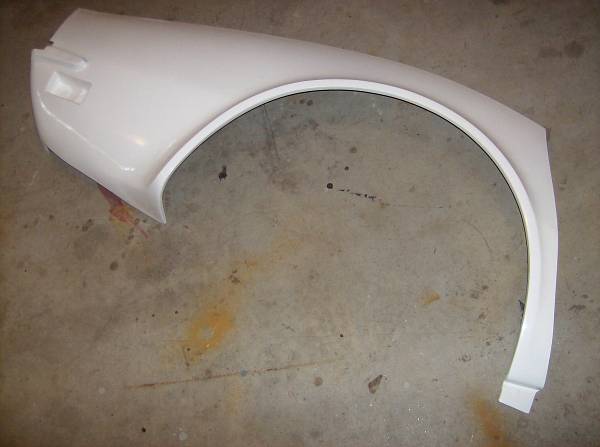 To start the panel was fit and positioned on the car by using several clamps to temporarily hold the panel in place. During fit up of the panel be sure to thoroughly verify the alignment of the panel. Not only do the edges need to be in alignment (trimming is typically required), but the body lines need to line up as well. For instance, the body line along the side of the door needs to line up with the matching line on the quarter panel. Although not incredibly obvious during fit up, misalignment of this body line would be readily apparent after painting. Similarly, the small projection for the rear bumper on the tail light and rear quarter panels need to be in alignment as well. After positioning the panel and then double checking its alignment, several alignment marks were made across the joint between the new and existing panels. These marks will allow the panel to be removed and then easily realigned while the panel is being trimmed to fit. 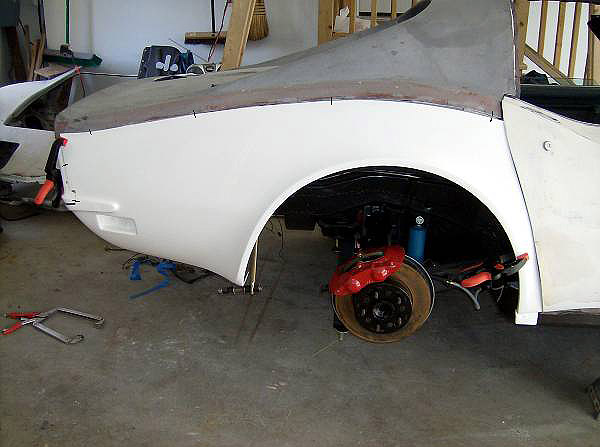 To begin, the marking and trimming effort focused on the edge of the rear quarter panel running along the rear deck and tail lamp panel. The photo below illustrates the need to trim the replacement quarter panel in several spots. 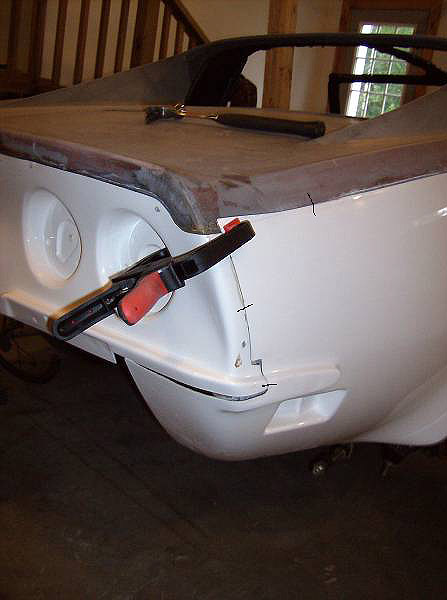 A black sharpie was used to mark the approximate removal limits on the new panel. Ultimately you want to end up with a gap approximately 1/8” to 3/16” wide between the edges of the new and existing panels. However, for this first pass the panel was intentionally marked to leave a bit of extra material in place. After all, it’s easy to remove more material later, but adding material is a different story. To mark the trimming limits you can either draw the necessary reference lines freehand, or you can provide a series of reference marks and then connect them with a straightedge. For the first round of trimming the second method was used. Recognizing there aren’t many straight body lines on a Corvette a series of reference marks were made along the panel at about six inches on center. Providing a series of closely spaced marks allows you to reasonably reproduce any curves that may be necessary. 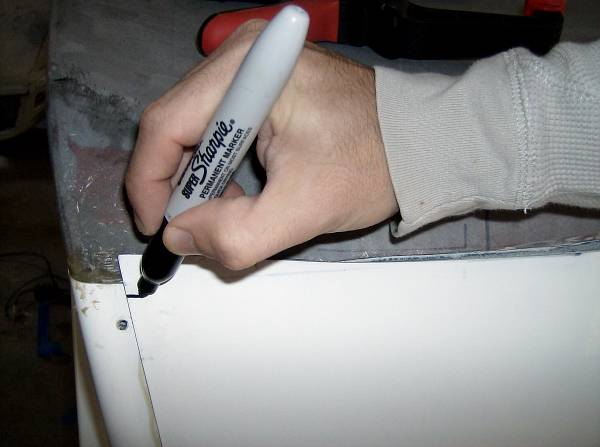 After marking the panel and removing it from the car a straight edge was used to connect the reference marks. 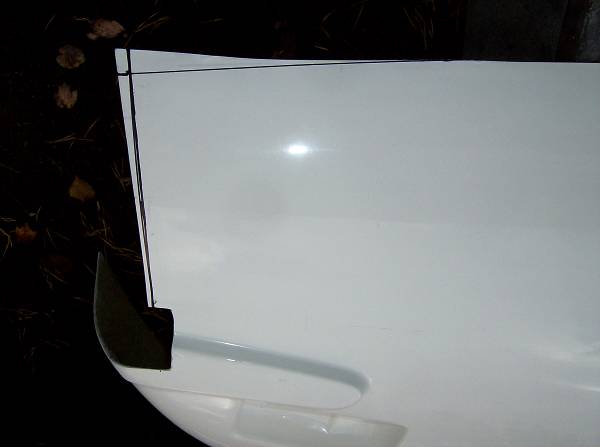 Once marked a die grinder with a 24 grit sanding disc was used to remove the excess material from the panel. Although small, the die grinder made very quick work of this task. Be aware that fiberglass dust goes everywhere during grinding. If possible, it’s best to complete this task outdoors. 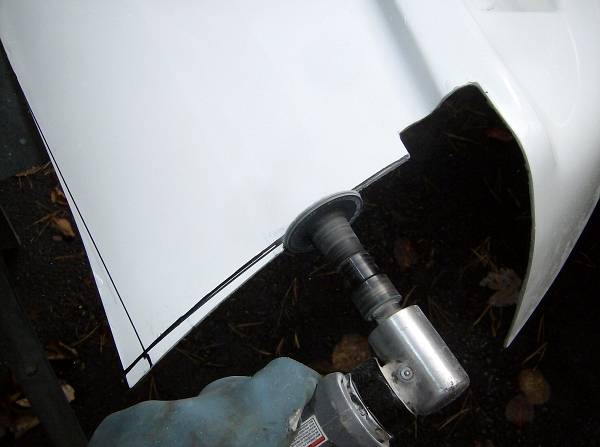 After the first round of trimming was complete the panel was fit back onto the car, additional reference marks were made, and the panel was removed and trimmed. This procedure was repeated until the desired fit was achieved. As a final step, a DA sander with a 200 grit sanding disc was used to clean up the rough edges left from the die grinder. 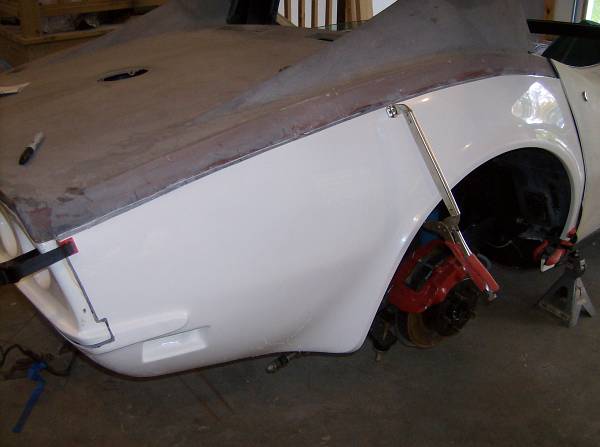 Once the rear and top edges of the panel were trimmed focus was directed to the fit of the panel along the passenger door. It may be obvious, but in order to trim this area of the rear quarter panel the doors must be installed and aligned in their final positions. To trim the front edge of the quarter panel a sharpie was used to trace along the edge of the door to provide a reference line for trimming. Once again the trim line was intentionally left a bit shy. Leaving a bit of extra material for ‘fine tuning’ later is especially important along the doors. Unlike the bonding seams, if your door gaps are wrong you won’t be able to cover up your mistake with bonding compound or body filler. 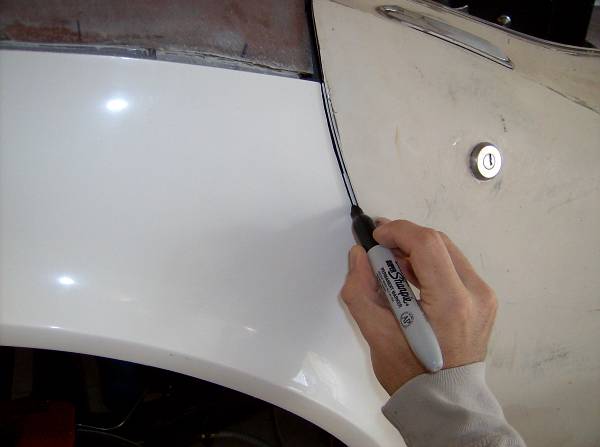 Because the die grinder was a bit aggressive, and because these lines are so important to the final fit and finish of the body, a DA sander with a 120 grit sanding disc was used to trim the front edge of the quarter panel. Although slower than the die grinder, this method allows a more accurate trim with less probability of accidentally removing too much material. At this edge the length of the quarter panel was intentionally left a bit long (a smaller than desired door gap was provided). This allowed the final trimming and sizing of the door gap to occur after the panel is bonded in place. 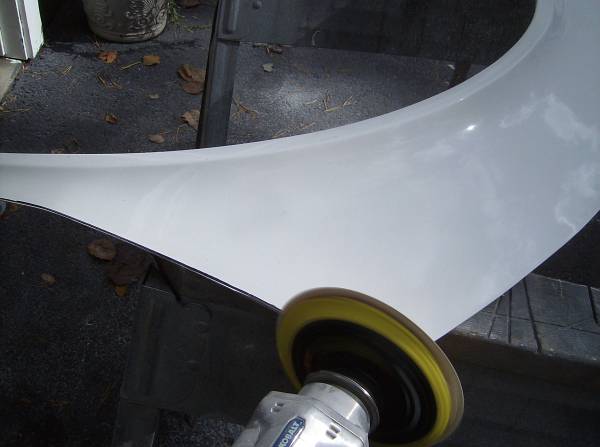 Once the edges of the panel were trimmed to fit, the back side of the panel was ground down where necessary using a die grinder with a 24 grit sanding disc. This effort was limited to areas of the panels that would be in contact with the bonding strips. The purpose of this effort was two fold. First, the rough sanding disc produces an excellent surface for the bonding adhesive to adhere to. Second, grinding the new panels is often required since the replacement hand layered panels are typically thicker than the original press molded panels. This second reason is especially important since grinding the back side of the panels will ensure the outside surfaces of the old and new panels will be flush after final assembly (more information on adjusting the thickness of the bonding surfaces can be viewed in the Tail Light Panel Installation update). 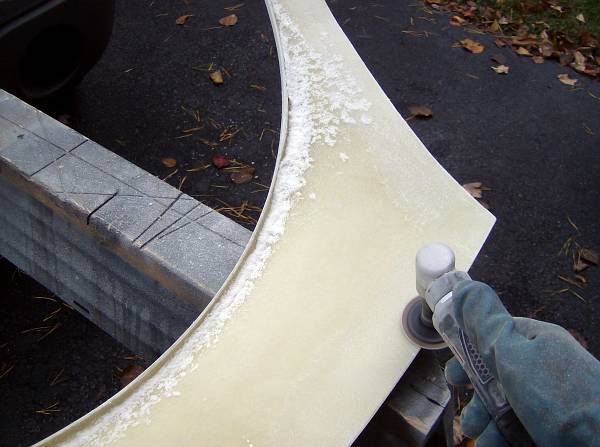 Finally, after making dozens of trips back and forth between the car and the grinder, the process of trimming the new quarter panel was finished. After blowing the panel clean with compressed air all of the bonding surfaces (including those on the bonding strips) were given a thorough cleaning using a rag soaked in lacquer thinner. 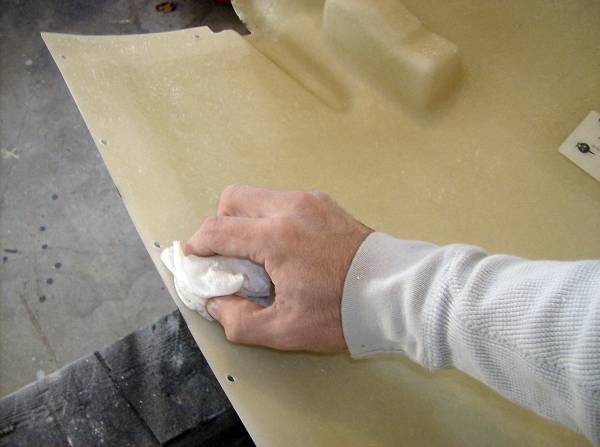 Next, masking tape was applied along the edge of the door to prevent any stray bonding adhesive from sticking to where it shouldn’t. 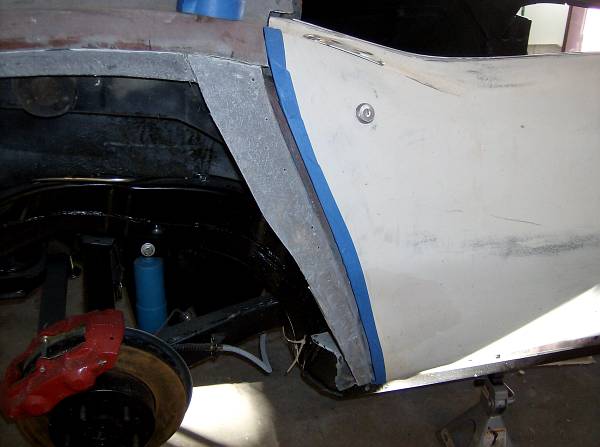 Similar to the installation of other replacement panels completed previously, both the panel and bonding strips were drilled to allow the panel to be secured in place using screws during the bonding process. As in the past, the screws received a light coating of WD-40 immediately prior to their installation to prevent the bonding adhesive from gluing them in place. 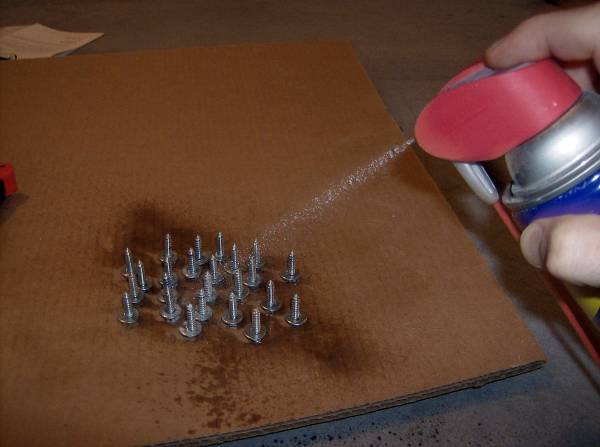 Next, the replacement quarter panel was bonded in place using Lord Fusor 127EZ. The process used to bond and secure the rear quarter panel in place was similar to the process outlined in the Tail Light Panel Installation update. 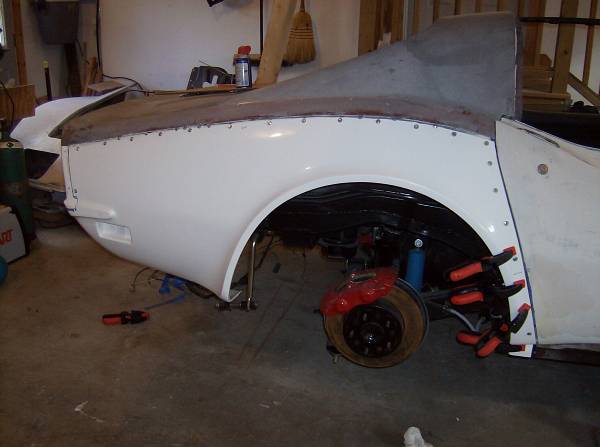 Finally, after allowing the bonding adhesive to cure for 24 hours, the screws and clamps were removed to reveal the near-finished product. 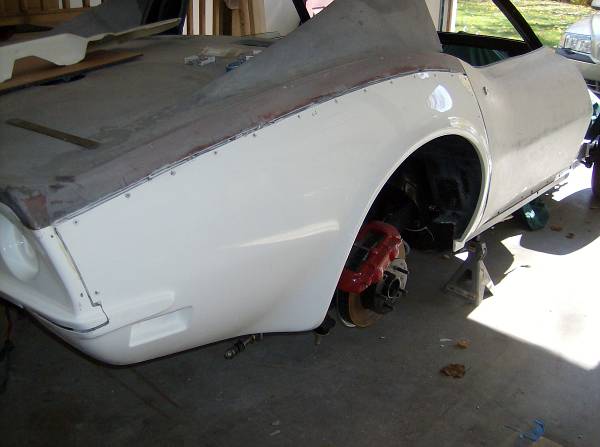 As expected the door gaps still require a bit of fine tuning. However, I’ve decided to tackle this task after the front clip has been installed. This will allow more opportunity to compensate for any unexpected surprises. 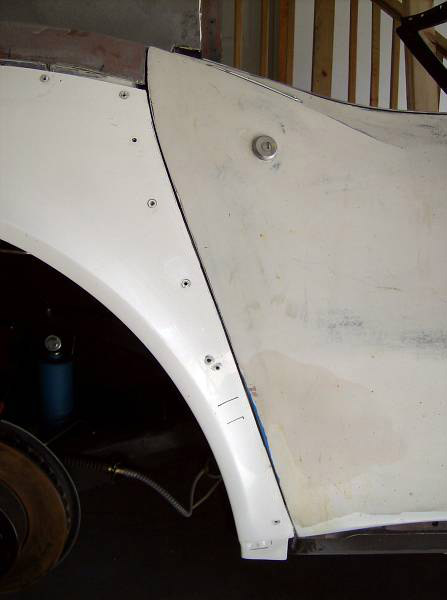 Lastly, the die grinder was fitted with a Scotch-Brite pad and used to remove excess bonding adhesive from the joint between the new and existing panels. Although this material could likely have remained in place I thought it best not to combine materials in these joints. In this case, the adhesive used to bond the panels was epoxy while the material used to fill the seams will be bonding compound. 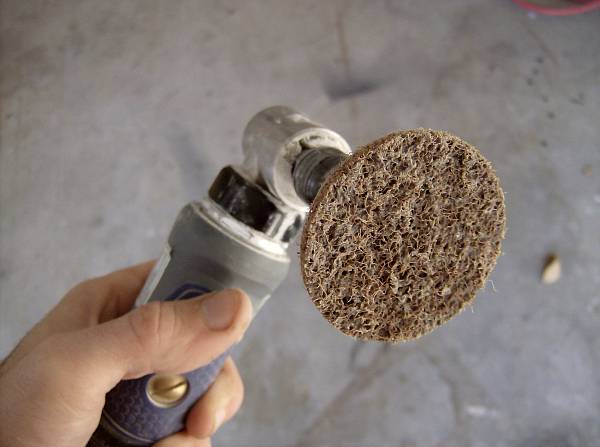 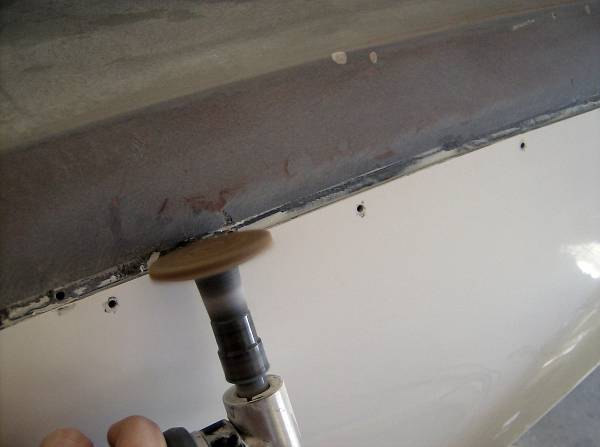 Well, that concludes this update. The next step of the project will be to install the new rear valence panel so stay tuned!   As always, thanks for stopping by to check out my progress. Another update should be posted in about a month. In the meantime, why not stop by the new Corvette Restoration Forum to discuss the project, ask your questions, or just to see what other folks are saying.

Lastly, if you’re a Facebook member you can now follow the project on the new Corvette Restoration Facebook Page. I’ll continue to provide progress updates on this site, but the new fan page will give me another method of easily sharing news along with advance photos of my recent progress.