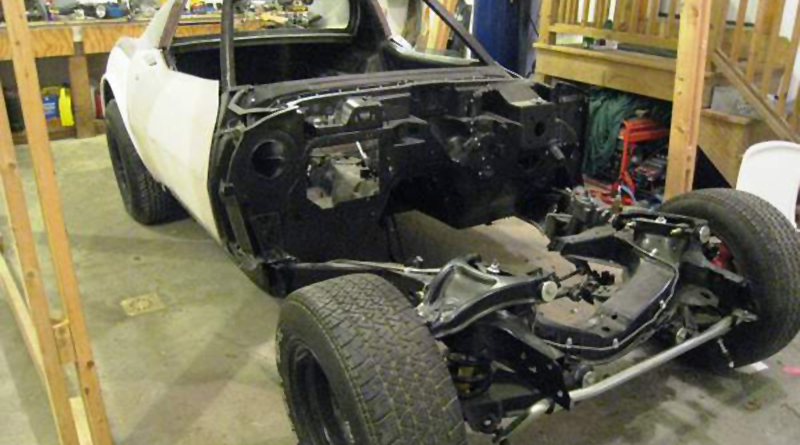 Fresh on the heels of the last update I’m finally moving forward with the restoration of this 1971 Corvette – literally. With the rear clip repairs now officially complete my attention has been directed to the front clip area of the car. Quite some time ago I spent a fair bit of time repairing, rehabilitating and painting the firewall. Since that time it’s been sitting in the garage, safely tucked away, waiting to be installed back on the car. Finally the time to reinstall the firewall has arrived!

But, before the firewall could be installed, I had to remove the body from the chassis to allow better access to the floor pan area. So, using the Corvette body lifting rack I developed and built, the body was lifted and the chassis was rolled out from underneath. 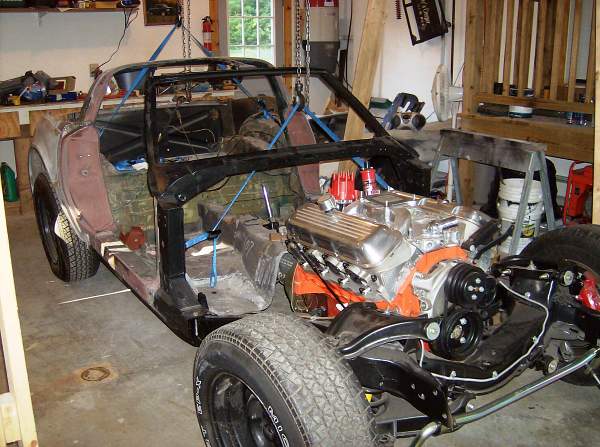 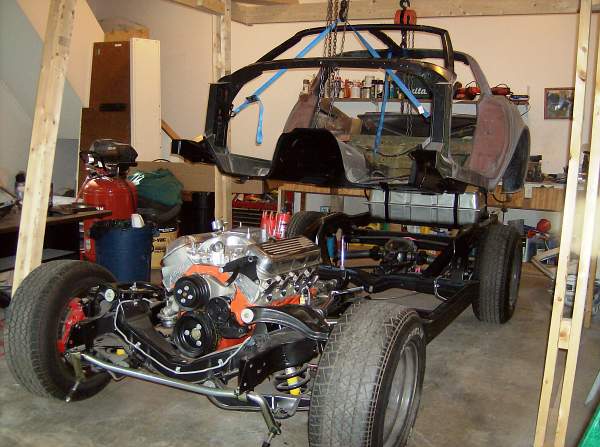 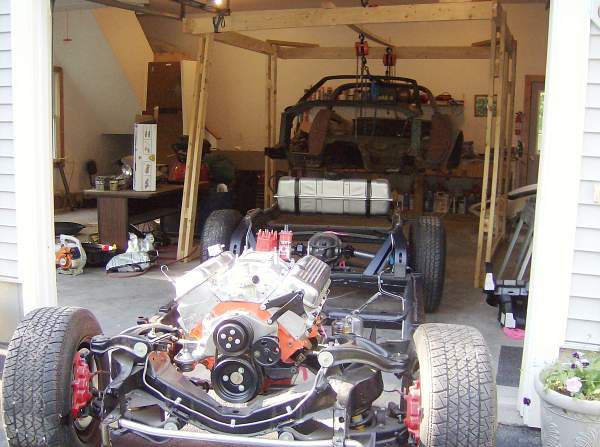 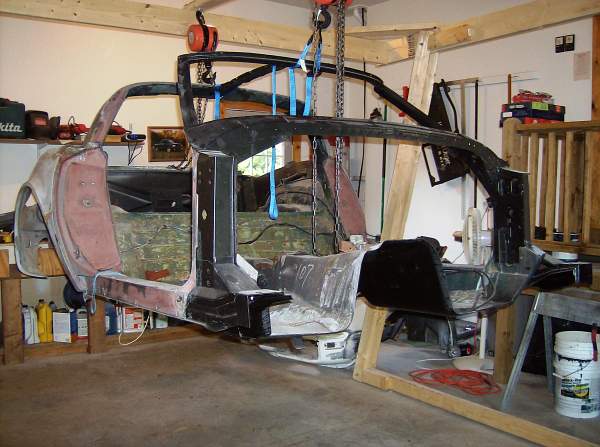 Once the chassis was rolled out of the way the body was lowered onto a set of sawhorses which worked great as they they placed the firewall at an excellent working height. 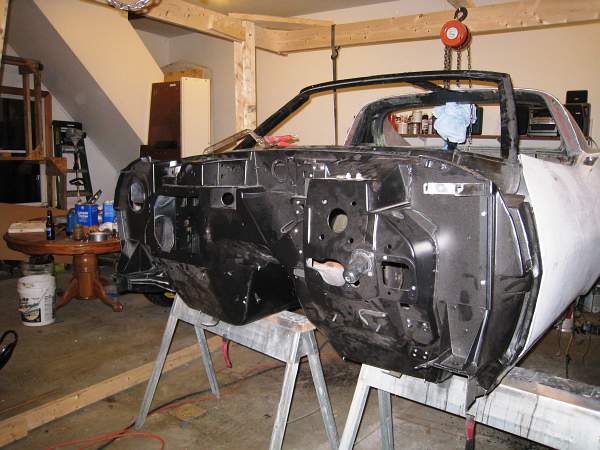 Keep in mind that the flange of the firewall mounts to the underside of the floor pan. This seems a bit counterintuitive at first, but it makes quite a bit of sense once you think about it. This arrangement orientates the lap between the two panels such that water from the firewall can simply roll off onto the floor pan with little opportunity to get through the body seam and into the passenger compartment.

Aligning the firewall turned out to be pretty simple. Along the top of the firewall there’s a line of rivet holes which I simply aligned with the corresponding holes in the bird cage/lower windshield cross bar. Once the holes were aligned a few pop-rivets were temporarily placed in the holes to keep things aligned (I didn’t actually ‘pop’ them for now). Several clamps were also used to secure the firewall the overall alignment and fit was reviewed. In the end I found the fit to be pretty tight  – there wasn’t a lot of opportunity for adjustment which made things easy. The left/right and up/down alignment was based on the rivet holes along the bird cage and the front to back fit was quite easy to figure out – the firewall is in the right spot when it bottoms against the door pillar!

However, I did check a few other areas just in case (better safe than sorry). In particular, the right to left fit of the firewall was verified by comparing how much of the door skin projected past the mounting flanges on the firewall. My check found that approximately 1/8″ of the thickness of the door skin projected beyond the surface of the mounting flange on both sides. With the alignment matching on both sides I moved forward with preparing the firewall for final installation. 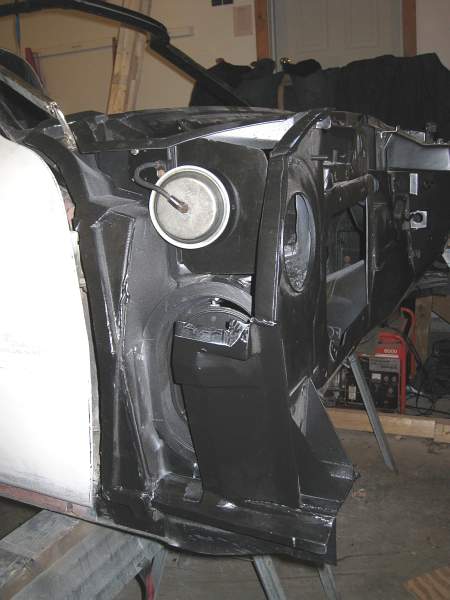 First, I prepped for the connection between the floor pan and the lower portion of the firewall. This was an area that I certainly couldn’t clamp and, because the two surfaces were not tight together, some form of temporary attachment was required. After giving it some consideration I decided to use temporary screws much like I used on the rear quarter panel (see the previous Rear Quarter Panel Installation article for more information on how to use temporary screws to attach two fiberglass panels together). Once it was all said and done approximately 10 to 12 screws had been installed.

So, with the proper fit of the firewall established, and holes for the temporary screws drilled, the firewall was removed so it could be prepped for installation. Prepping primarily involved scuffing all of the mating surfaces with 80 grit sandpaper and then thoroughly cleaning them with lacquer thinner. Although it didn’t take a tremendous amount of time, this became a pretty tedious process. There were a lot of bonding surfaces to address and the PPG DP40  epoxy primer I used made for tough sanding. 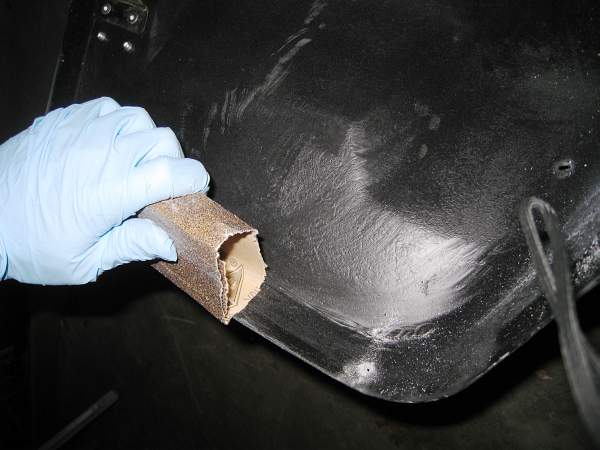 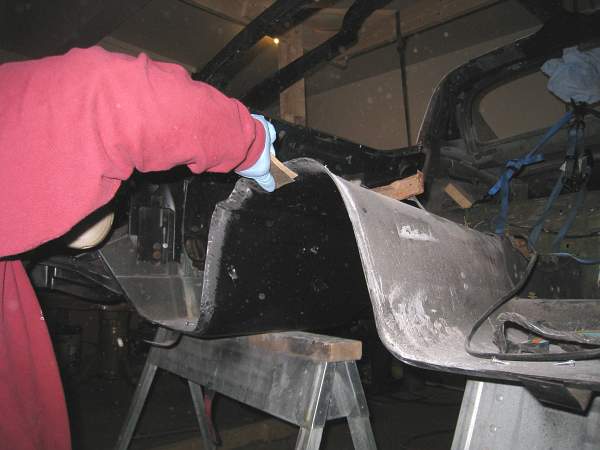 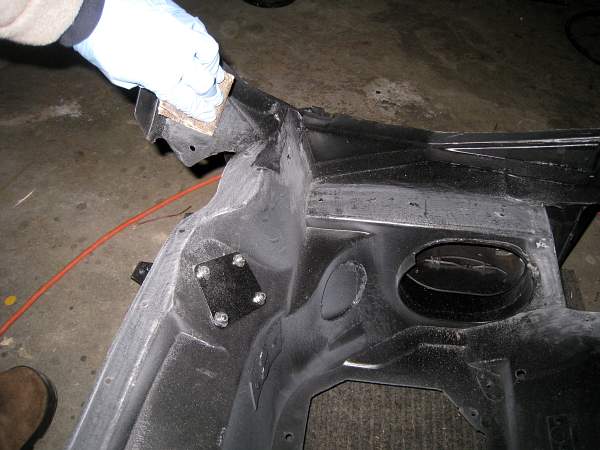 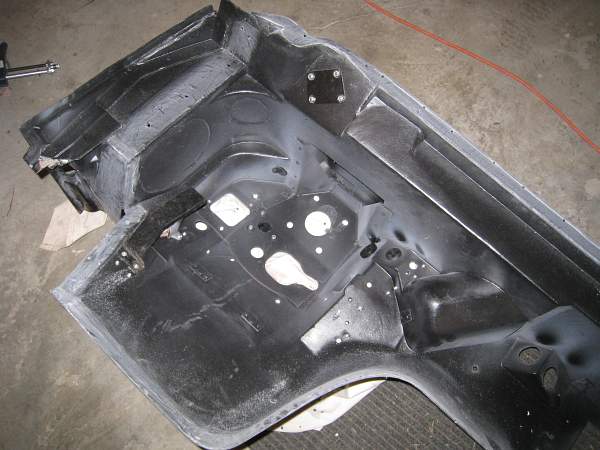 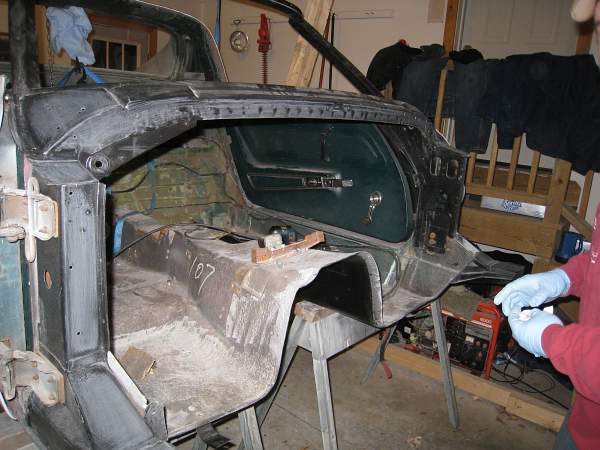 Once all of the bonding surfaces were prepped the application of the sealant and bonding adhesive got underway. At this point I found it very helpful to be well organized. You’ll want all of your tools set aside and ready for use, plenty of adhesive, and an extra helper if possible. Even with materials that allow for longer working times, you don’t want to be searching for a putty knife or your rivet gun while your adhesive is curing. You only have one shot at this so it’s best to spend an extra bit of time to get properly setup and prepared. That said, you could probably complete the firewall installation with just one person. However, having an extra set of hands to help place, align  and seat the firewall in the adhesive makes the process a lot easier.

For adhesives I decided to use a combination of products instead of just the Lord Fusor 127EZ epoxy that was used on the rear clip body panels. Given how much surface area needed to be coated, and the high price of the 127EZ, a combination of materials seemed to make good sense. After all, I wanted to set the firewall in a good bed of adhesive to keep things watertight, but it all didn’t need to be high end epoxy adhesive.

To start, a thick bead of high quality flexible polyurethane construction adhesive was applied along the outside edges of the mating surfaces. The primary purpose of this product was to ensure a flexible and watertight seal. 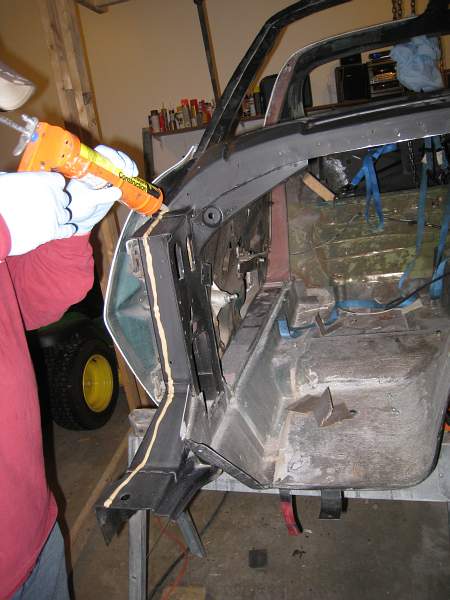 Next I applied a good thick bead of Lord Fusor 127EZ along the inner edges of the bonding surfaces. Both products were purposefully selected to provide a 60 minute working time. Mounting the firewall definitely didn’t take 60 minutes, but it was really nice to have plenty of time to set the firewall without feeling hurried. 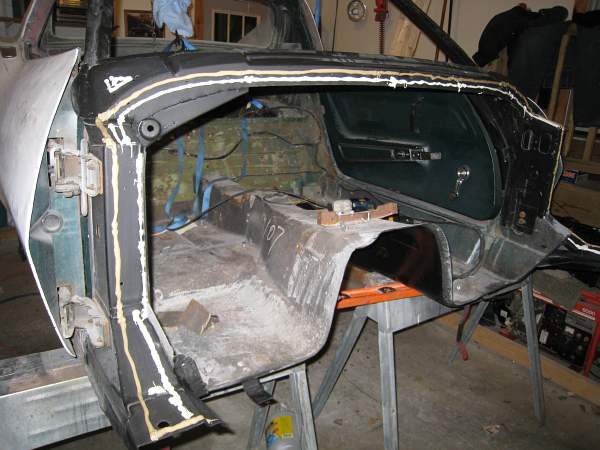 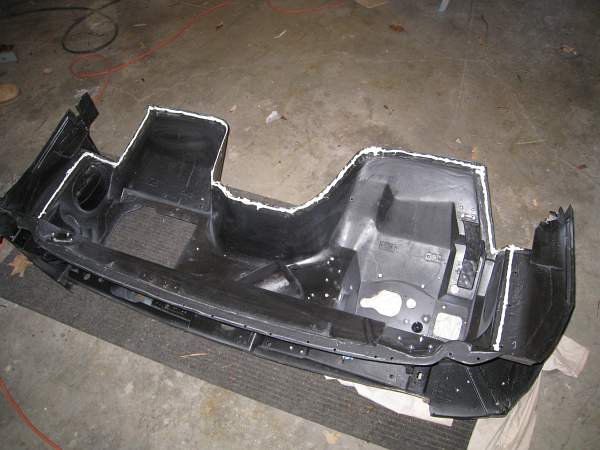 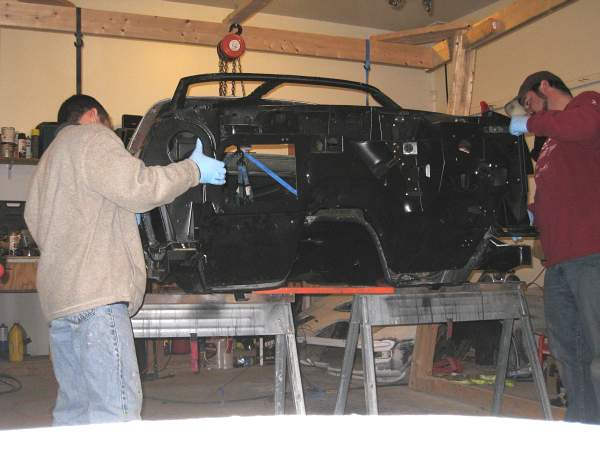 Next, and working quickly, new 3/16″ diameter pop rivets were installed to permanently affix the firewall to the bird cage. This is where it came in really helpful to have an extra set of hands. These rivets take a reasonable amount effort to install and, after completing a half dozen or so, your hand can start getting pretty fatigued. My friend and I took turns installing the rivets which helped make quick work of the task. Once the rivets were installed the screws between the floor pan and firewall were installed and tightened to keep the two panels in tight contact while the adhesive cured. 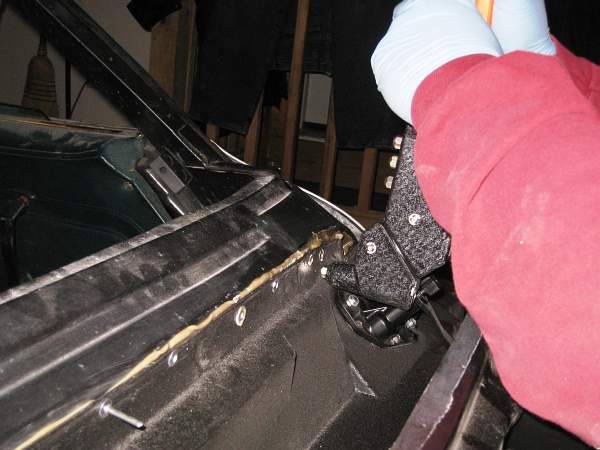 After installing all the rivets and screws there were quite a few areas where adhesive had oozed out from the bonding seams. To avoid having a big mess to clean up later a putty knife was used to scrape away the excess material before the adhesive fully hardened. 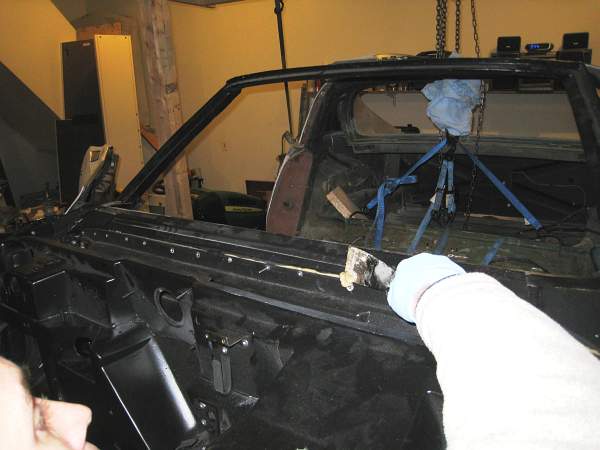 The end result was a very neat and professional looking job. Overall I was quite pleased with the results and, at this point, decided to take the rest of the night off while the adhesive cured. 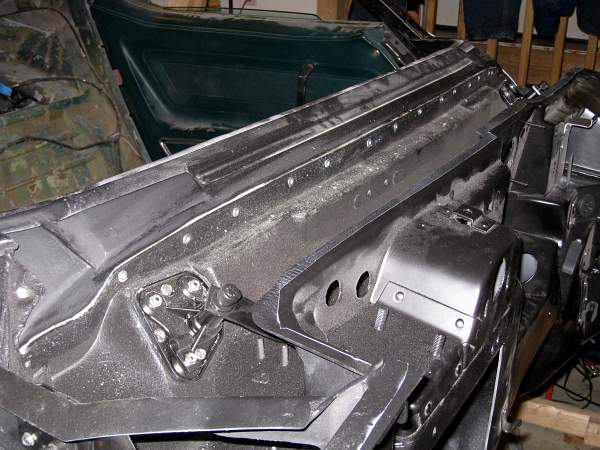 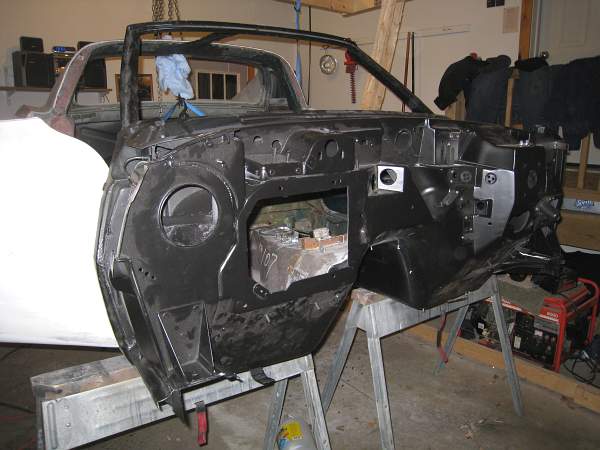 Here’s a view of the firewall from inside the passenger compartment. If you look closely you can see the heads of the screws used to temporarily attach the floorpan to the firewall. 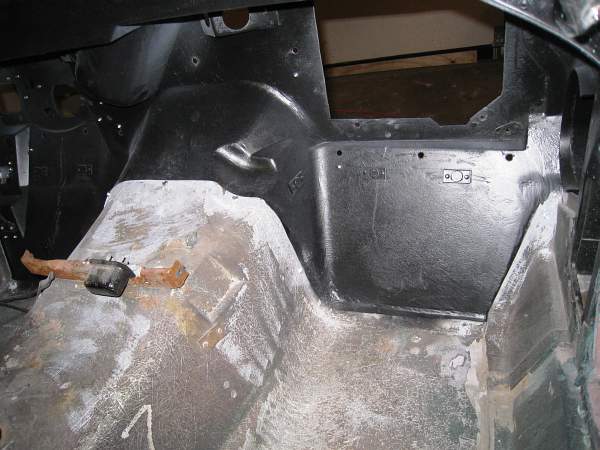 A view from beneath the firewall. Once again, if you look carefully, you can see the shanks of the screws used to temporarily hold the firewall and floorpan together. 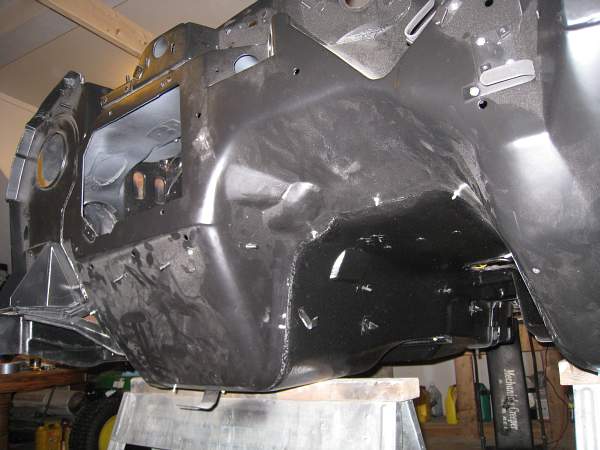 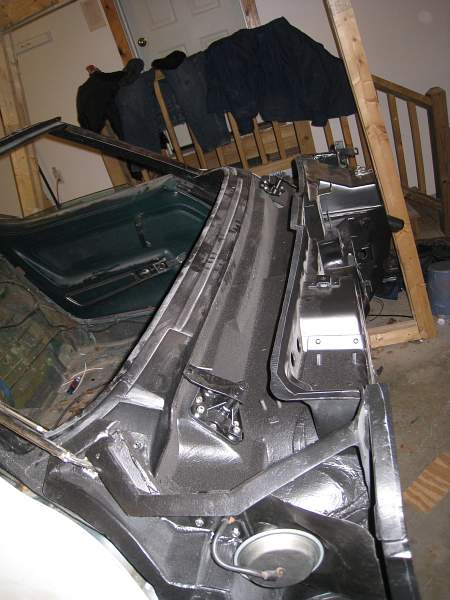 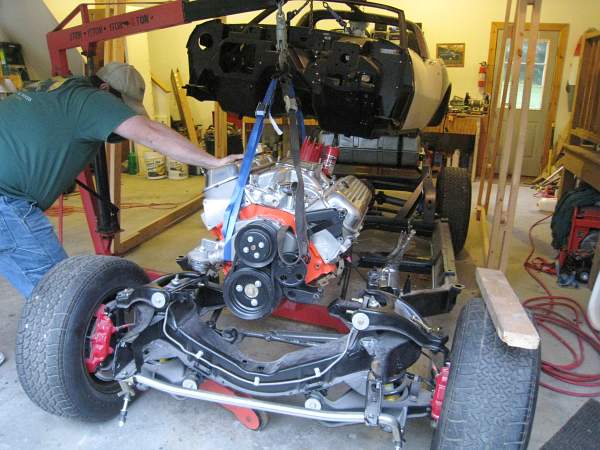 And here it is – the firewall mounted back to the birdcage and installed on the chassis. It’s remarkable how quickly the car has started coming together over the past few months. Next up – front clip!!!! 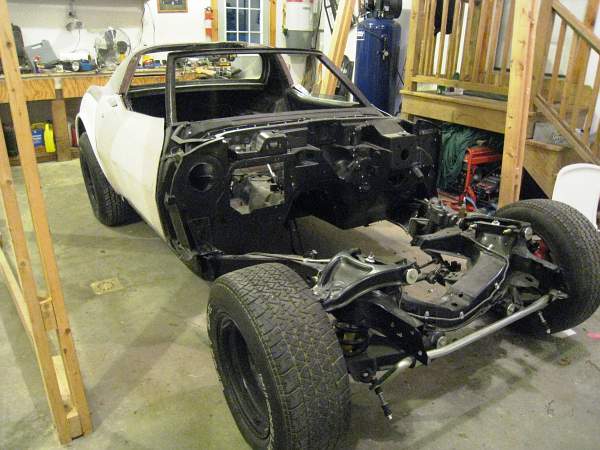 That’s it for this update. As noted above, installation of a new one-piece replacement front clip is next on the to-do list. I learned a tremendous amount while installing the new clip so I’ll try and convey as much of that information as I can.

Stay tuned for a new update in a month or two. In the meantime please feel free to stop  by the Corvette Restoration Forum to share your project with others, or to simply see what’s going on. Lastly, if you haven’t done so already, please Like this project on Facebook to receive the latest news regarding project developments, updates, and progress!