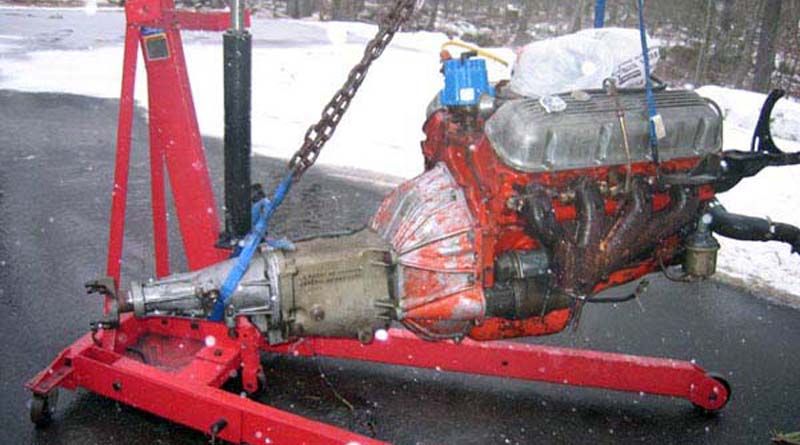 Following a short break after finishing the chassis it was time to get started on the engine work. I’ve been thinking about what engine combo I want to go with for a while but at this point I’m still not sure exactly what the final specs will be. In any case, like the rest of the project I’ll be documenting my progress as I go. Right now I’m planning on new heads, cam, intake, carb and headers. Also, since I’ve got this big block torn down anyway I’m going to freshen up the bottom end a bit to be sure any hidden problems get taken care of.

So, the first step was to clean the 30+ years of dirt, grime and grease off the old engine. I was hoping for some decent weather for this task, but February weather in Maine can get pretty chilly and this day was no exception. Despite sub freezing weather and a little snow, a good dose of degreaser combined with a good pressure washing did a pretty good job. 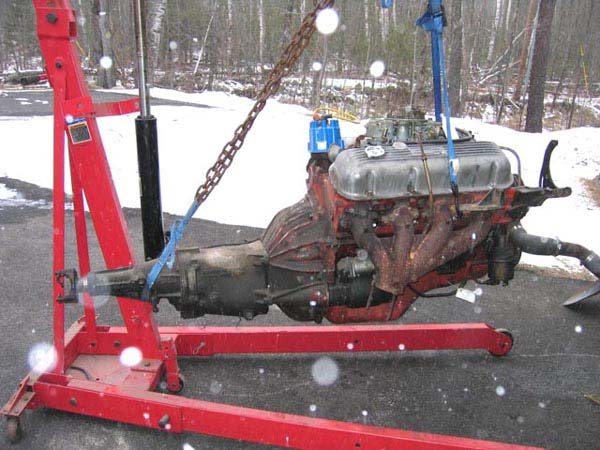 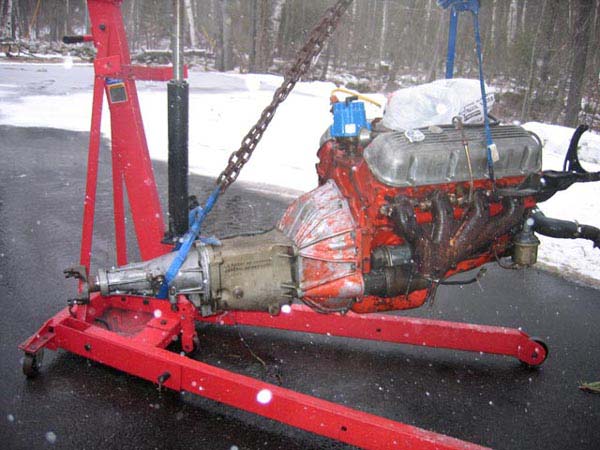 Getting the engine mounted on the stand required the removal of the transmission, bell housing, flywheel, flexplate and clutch. During the removal of these parts I made sure to mark the relative positions of the flywheel and flexplate immediately after taking them apart. This will allow me to properly align the two in the future and eliminate the possibility of any balancing problems. 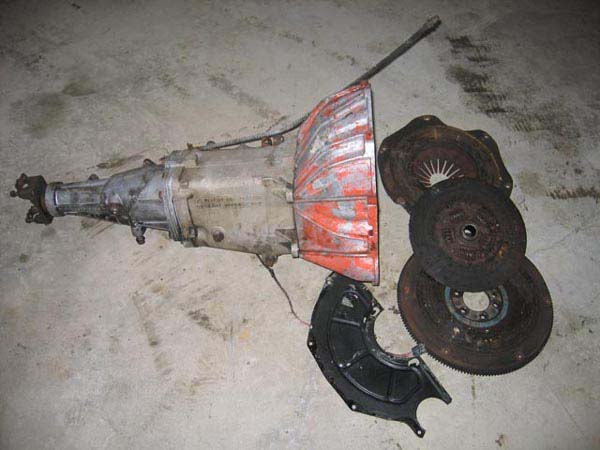 After the tranny was removed getting the engine mounted to the stand was pretty simple. 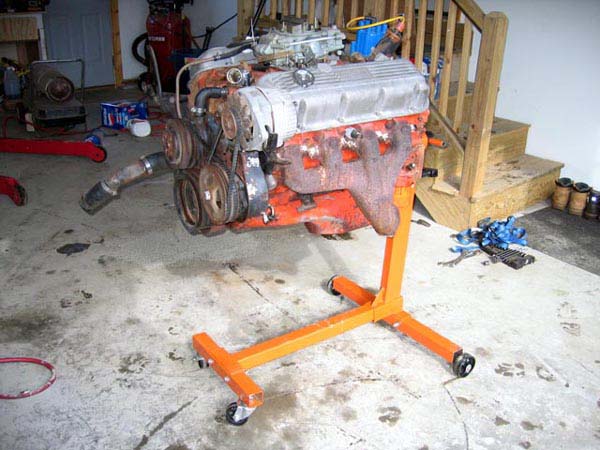 Below are several photos taken during disassembly of the motor. Overall, things went pretty quickly. Since I’ll be rebuilding the top end with all new parts I didn’t have to tag, bundle, and mark each component (lifters, pushrods, valves, etc.) with it’s original location. If the original parts were to be reused this would be an important step to ensure everything could be reinstalled in it’s original location. 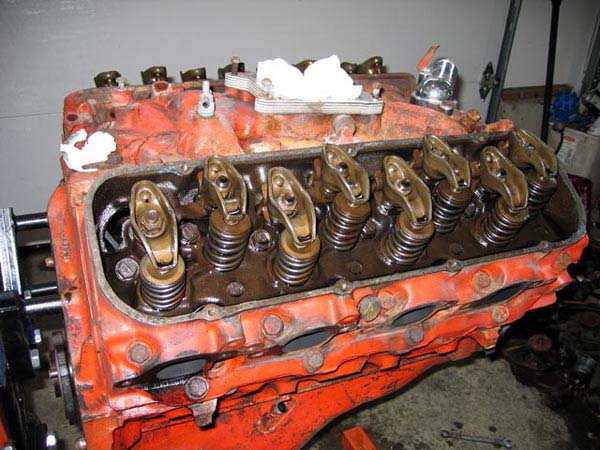 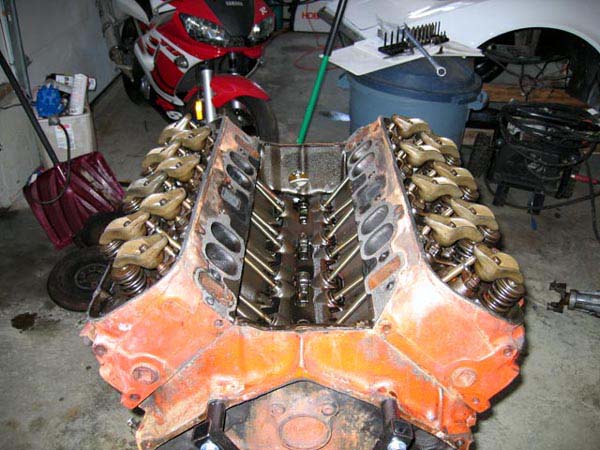 Here are the old heads and intake off the car. I’m not quite sure that I’ll keep them, they really aren’t of much use to me. If I had to guess I’d say they’ll end up as E-Bay items. 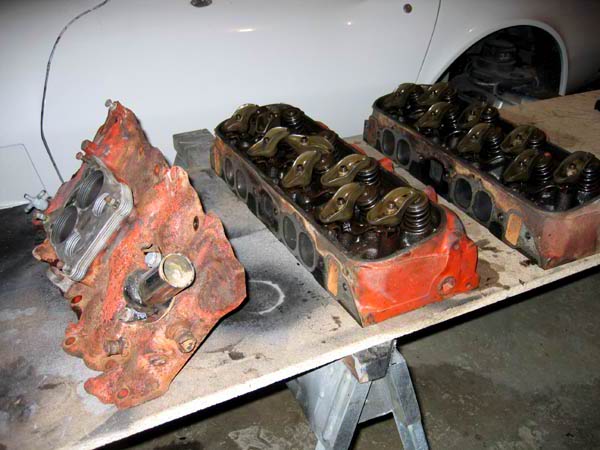 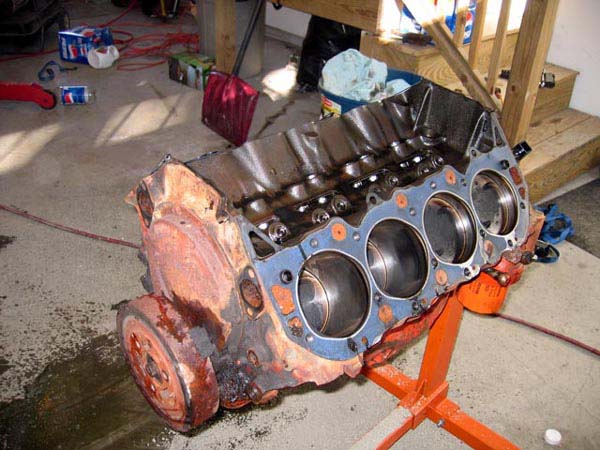 I don’t know what the previous owner did to put those dents in the oil pan, but it’ll definitely be replaced as part of this rebuild. 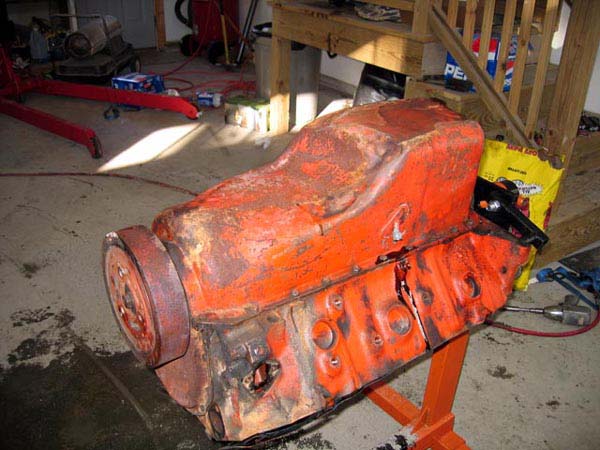 Luckily it looks like the damage to the oil pan was only superficial. I’ll find out more when I visit the machine shop. 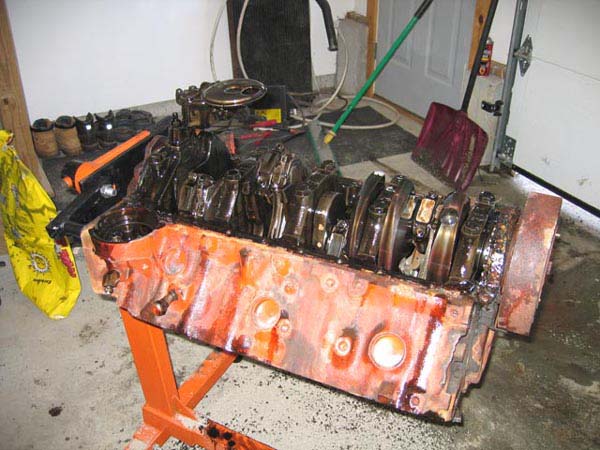 The one thing I would definitely recommend prior to doing anything like this is to put down a piece of heavy duty plastic on your floor to catch all the oil, antifreeze and everything else that spills out of the engine. I didn’t think of it before I started and ended up making a pretty good mess out of my garage. 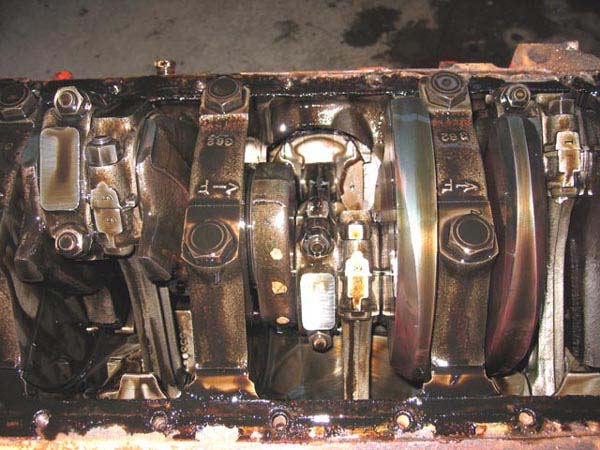 Stay tuned, the next update should include the conclusion of the engine disassembly.