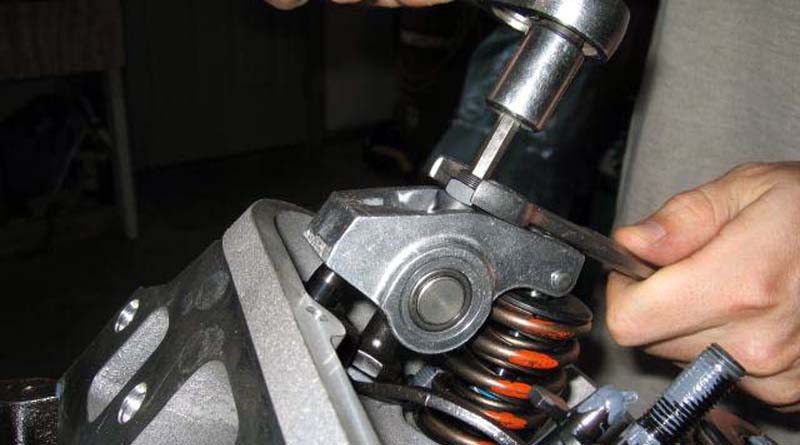 Well, I managed to make fairly good progress in the last few weeks. Since my last update the parts I ordered came in and I was able to get a decent amount of work done on the motor.

First, before going too much further with my engine build, there is one additional check that needs to be done – check the piston to valve clearance. For obvious reasons this is an important check. If a piston was to make contact with a valve because not enough clearance was provided, or for any reason for that matter, the result could be catastrophic. To accomplish this check I simply used a bit of modeling putty (that’s just a fancy name for Play-Doh) placed in areas on the piston where clearance issues may exist. To prevent the putty from sticking to the valves I sprayed the valves and combustion chamber in the cylinder head with WD-40. I also cleaned the piston with lacquer thinner to help the putty stay in place on the piston during the test. 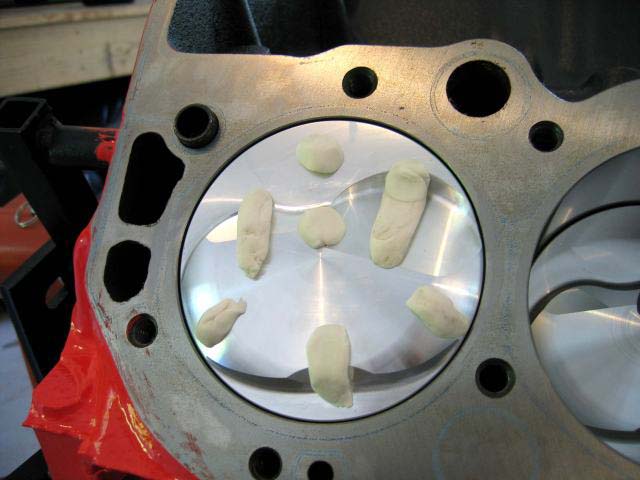 With the putty in place I reinstalled the cylinder head and bolted it down. For this check I left the head gasket off which will give me conservative clearance results. Since I’m still using those checking springs I once again set up my dial indicator to ensure that I was getting full valve lift as I rotated the engine through several cycles. Specifically, I was worried that the valve pressing against the putty would cause the hydraulic lifter to collapse. Initially it did cause the lifter to collapse a bit, but after rotating the engine through several cycles I was able to get full lift.

Next I removed the cylinder head and verified that none of the putty got caught in the valves or was stuck to the combustion chamber. If it had I would have needed to clean it off and start over. With the cylinder head removed it was obvious where the putty had been flattened. To get accurate measurements I used a razor blade to make a vertical cut down the center of each piece of putty. The point of minimum clearance was evident – it occurred at the flat area at the top of the piston. I measured the clearance as 0.060″, plus the compressed head gasket thickness of 0.039″. Therefore my total clearance will be approximately 0.100″, a fair bit more than the minimum clearance of 0.040″ (for engines turning less than 7000 RPM). One additional interesting note is that the minimum piston-to-valve clearance occurs at the side of the valve, not at the bottom of the valve as many would expect. 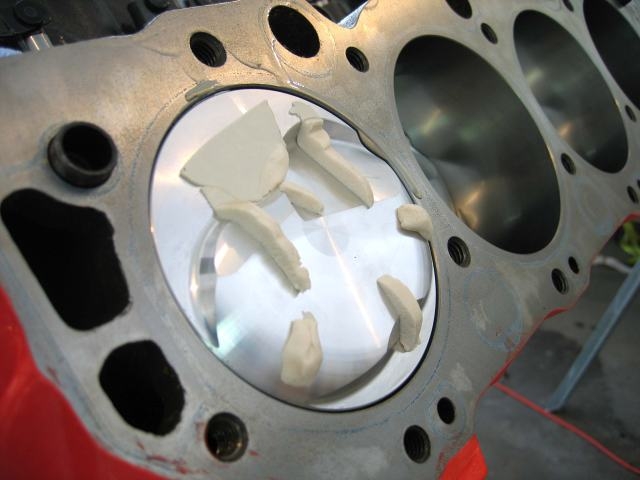 Well, before installing the cylinder heads for the last time I decided to do a bit of double checking. Primarily I was concerned about which valve springs had been supplied with my cylinder heads. After a phone call to Airflow Research I discovered that the valve springs installed on my heads had a seat pressure of 170# and an open pressure of 430#. This was surprising since the pressures are a fair bit higher than the spring pressures I’ve heard tossed around in the past. Although the AFR representative said these are the springs they like to use with hydraulic roller cams, I was still a little concerned since excessive spring pressures lead to premature valve train and camshaft wear. To see how much spring pressure my new lifters could handle I made a call to Comp Cams. They said that 170#/430# was too much pressure and would probably collapse the lifters. So, I guess I’ll be replacing all the valve springs…. 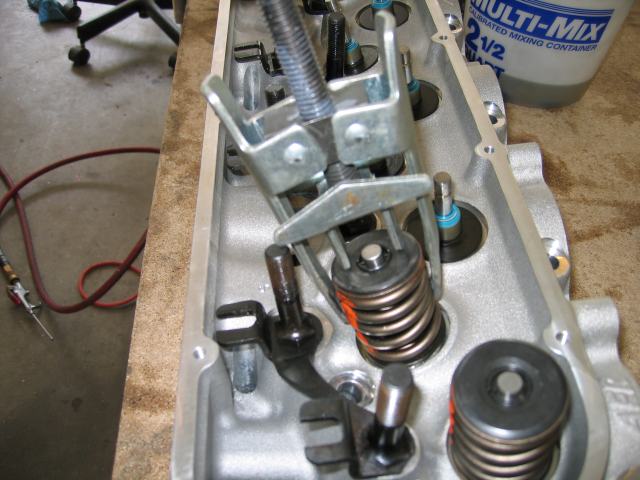 Well I wasn’t real happy about having to do it, but I ordered some new valve springs from Comp Cams, removed the AFR springs and installed the new ones. I decided on Comp’s #928 valve springs. For my setup these springs produce 130 pounds of seat pressure and 340 pounds of pressure at full valve lift. Others I talked to have used this same spring with hydraulic lifters turning up to 6000 RPM without any valve float problems so I felt these springs were a good choice. 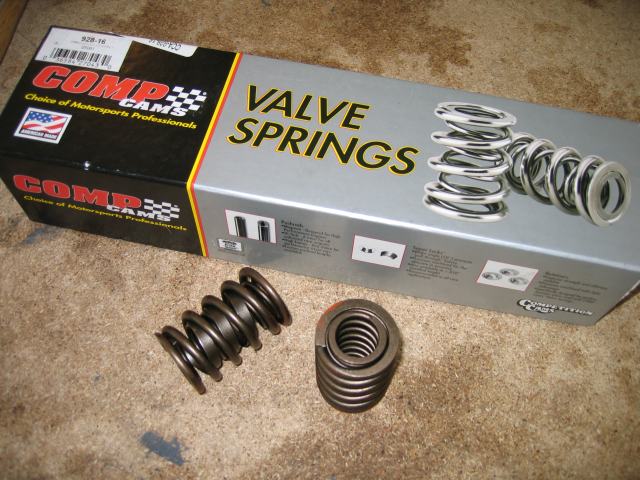 Here’s one of the new springs in the valve spring compressor ready to be compressed and installed in the block. As you can see it’s a dual spring with a third coil separating the inner and outer springs. 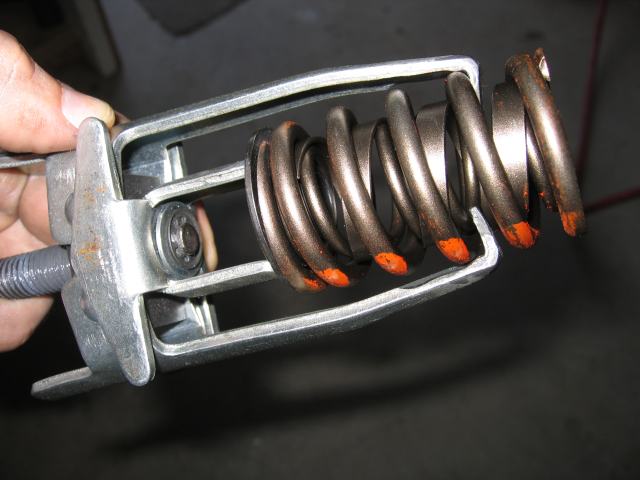 So, after several hours of swapping parts I was finally ready to get the cylinder heads installed. After thoroughly cleaning the gasket mating surface of the engine block with lacquer thinner I put the new head gaskets in place. Based on Airflow Research’s recommendation, I’m using Fel-Pro’s #1017-1 head gasket. 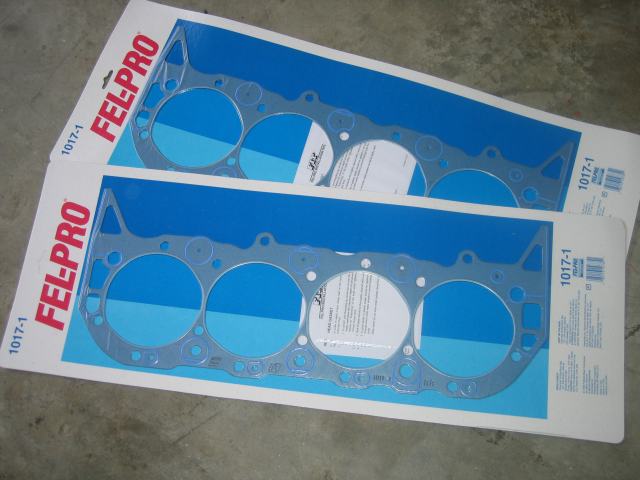 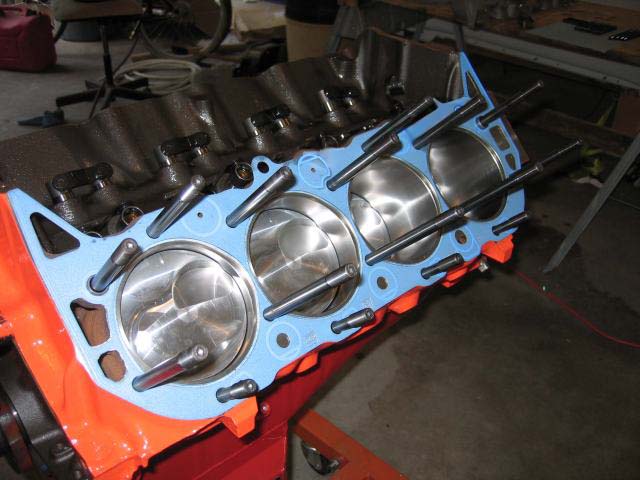 With the head gaskets in place I cleaned the mating surfaces of each cylinder head and lowered them over the head studs. 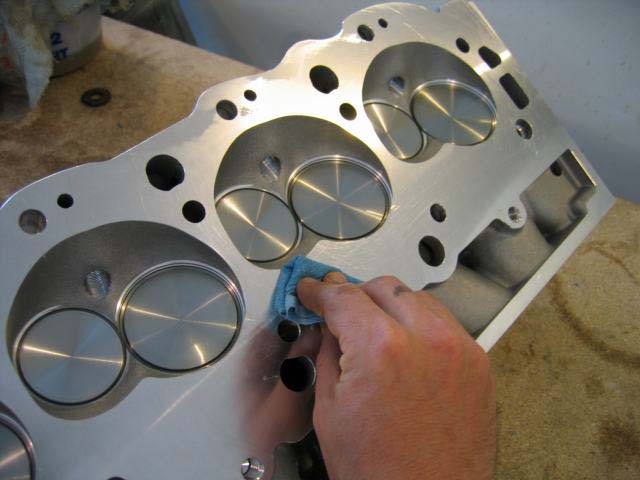 After lubing each stud with some moly grease I torqued each stud in 10 ft-lb increments using the factory specified torquing sequence. 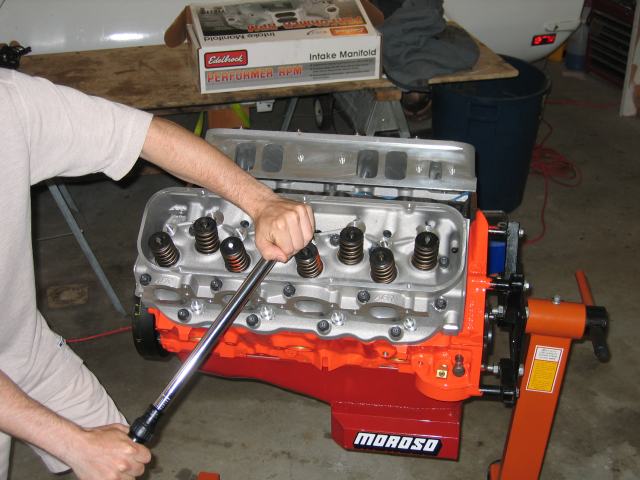 To be able to torque the head studs I had to remove the rocker arm studs and pushrod guide plates to get enough clearance. The guide plates help keep the valve train in proper alignment by keeping the rocker arms centered (in the front-to-back direction) over the valve tips. With the cylinder heads torqued down it’s time to get them reinstalled. 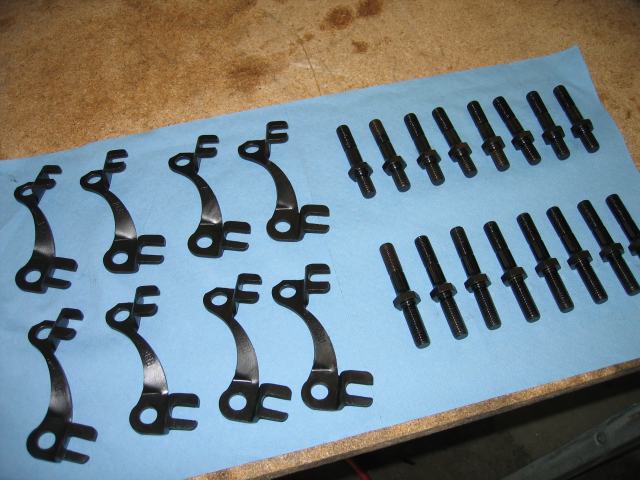 During reinstallation I torqued each rocker arm stud to 50 ft-lbs. 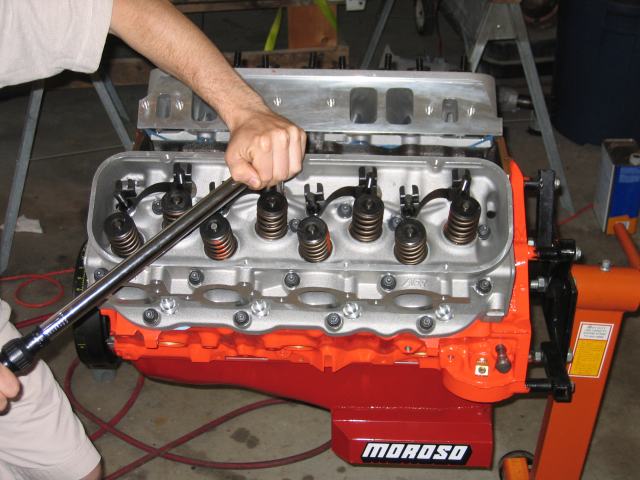 So, with the heads and guide plates installed I can now start assembling the valve train. Before installing the new pushrods I first thoroughly cleaned each one and then wiped them down with a lightly oiled rag. 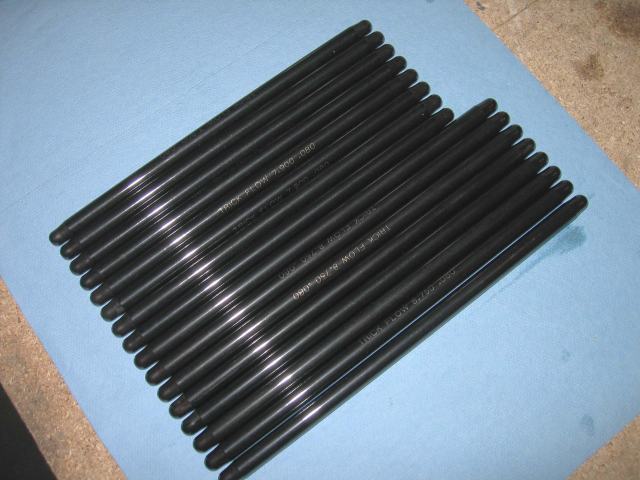 Installing pushrods is pretty simple – just drop them into place and double check that each one is seated properly in the lifter. 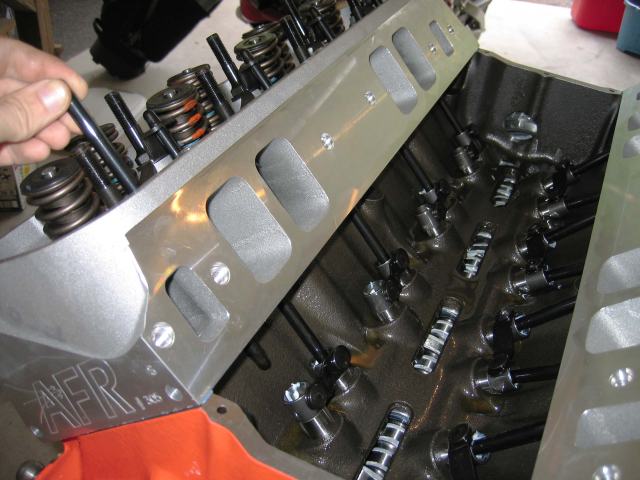 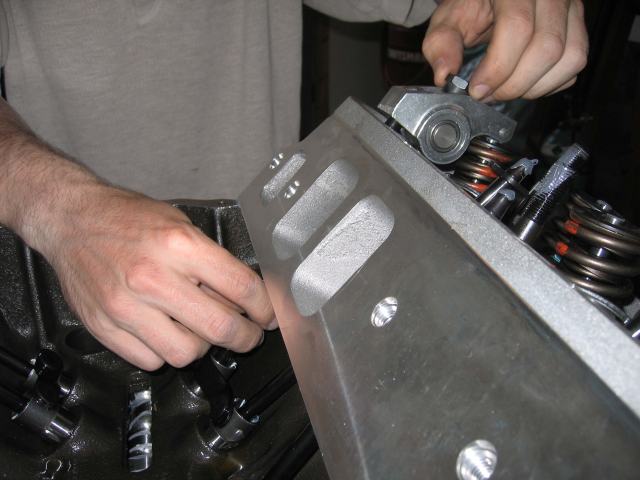 Once at zero lash I turned each nut and additional one-half turn, installed the locking nuts and tightened them down. In the photo below you can see that I’ve also applied a bit of moly grease to the tip of each pushrod and valve stem to reduce wear during initial startup. 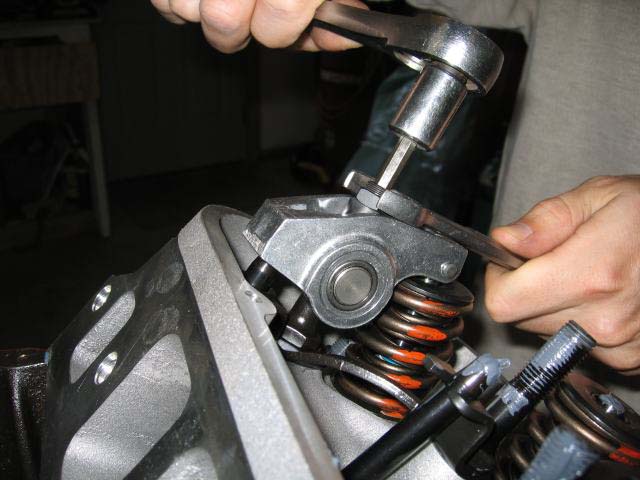 Uh-oh! After I got about half way done I noticed that my rockers weren’t centered properly over the valve tips. I don’t want to be replacing the valve guides any time soon so I’ll have to fix this. The problem was that, although one rocker arm was centered over the valve tip, the other was quite a bit off center. This meant that each guide plate needed to be modified to properly establish the valve train geometry. 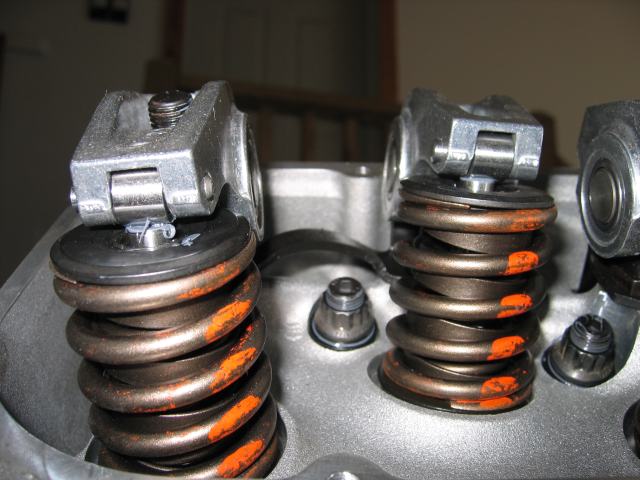 Here’s a close-up photo of one of the rockers. As I mentioned, the roller tip should be centered over the valve tip to prevent side loading of the valve guide. That’s certainly not the case here. 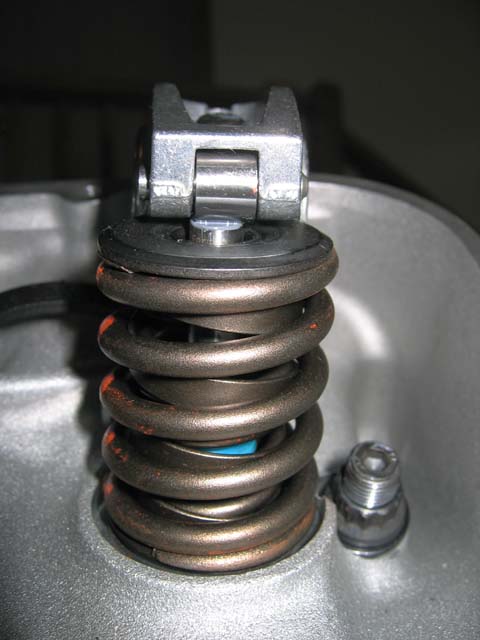 Apparently Airflow Research heads are notorious for having this problem. It’s not a big problem, but a pain to fix nonetheless. Anyway, simply shifting the guide plate back and forth didn’t do the trick. Instead, I had to disassemble the valve train, remove the rocker studs and guide plates and then do some modification work to the guide plates. Using a Dremel tool I enlarged the holes for the rocker arm studs just a bit. Next I either flattened or increased the camber of the center portion of the guide plate as needed to get the proper rocker arm alignment. It took numerous tries to get each one right, but after a several hours I managed to get the rocker arm geometry dialed in pretty good. 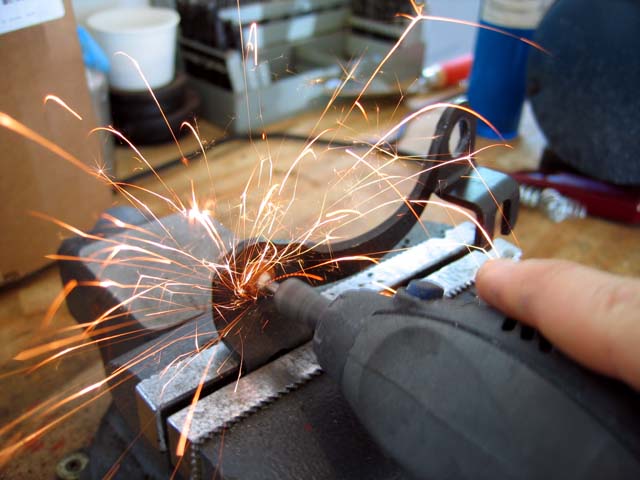 Here are the rocker arms after adjusting the guide plates and getting everything reassembled. At this point I’ve established that the valve train geometry is correct by 1.) centering the rocker movement in the left-right direction via. pushrod length and 2.) centered the rocker arm movement in the front-back directions by adjusting the guide plates as necessary. I should also note that during the valve train assembly I checked that the valve springs were not binding at full lift, that there was sufficient clearance between the rocker arms and valve spring retainers, and that the pushrods did not rub against anything when the engine was turned over. 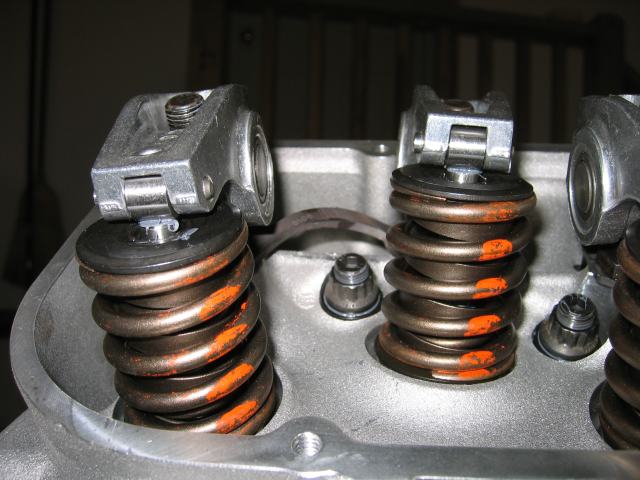 In the end this whole process took a while longer than I had planned. Not only is there a lot to check, but getting everything set up properly is time consuming. In the end it will be worth it though! Below are a few photos of the motor with the heads and valve train fully installed. 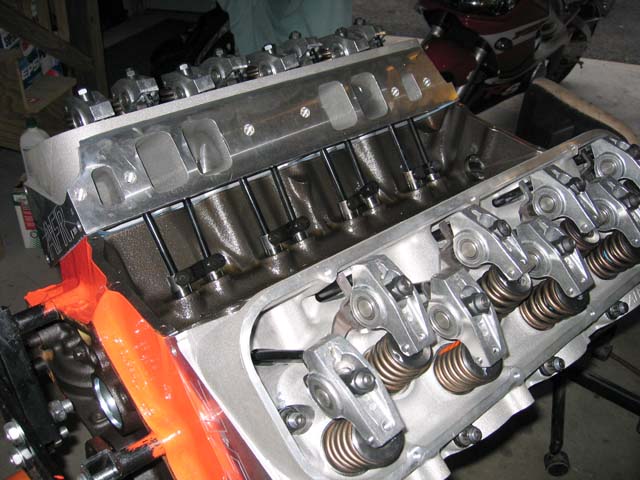 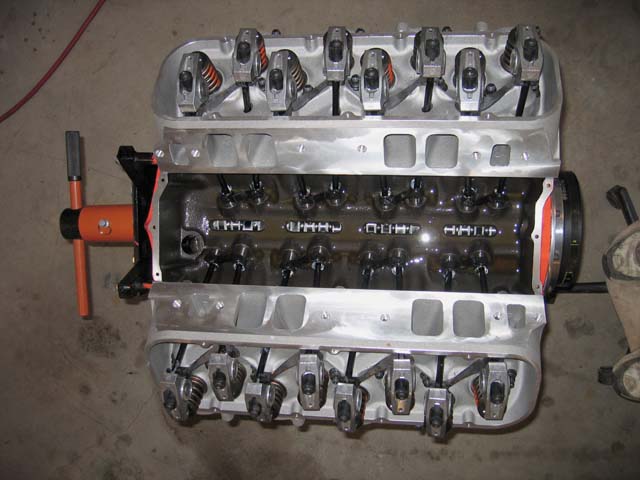 Next on the to-do list is getting the intake in place and then bolting on parts such as the carburetor, water pump, alternator, etc. It won’t be long before I have this motor on a dyno and we all get to see what it can do!