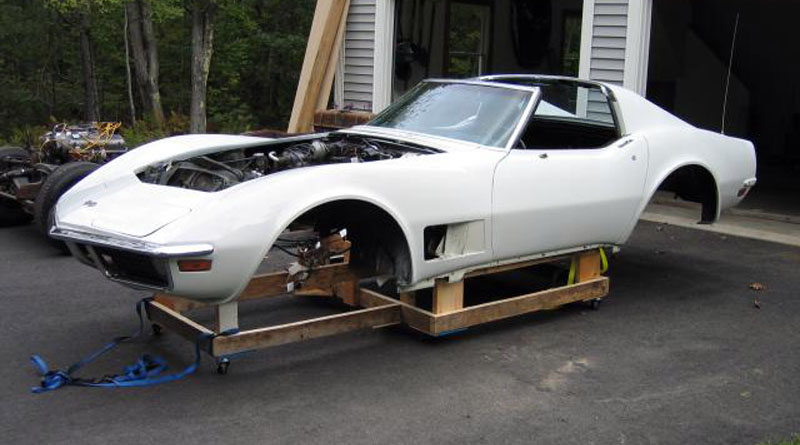 Well, I figured it’s about time for another update so here goes! With the chassis and driveline about 95% complete my attention was redirected to the body. One of the biggest jobs in this restoration is going to be tackling the paint job and fiberglass repairs that need to be done. Aside from a really bad “backyard” quality paint job current on the car, there’s a fair bit of fiberglass damage to the front and rear valences, inner fender wells, as well as to the body panels in general. Apparently when the car was last painted the owner got overly aggressive with the sandpaper and penetrated into the fibers of the fiberglass panels – not good. My plan of attack is going to be to approach the major issues before sending the body to a professional to have the body “fine tuned” and painted.

So, that said, here’s what I started with – the body on the dolly. Sure the paint looks ok in this photo, but in person the orange peel, pitting and other defects really show up. 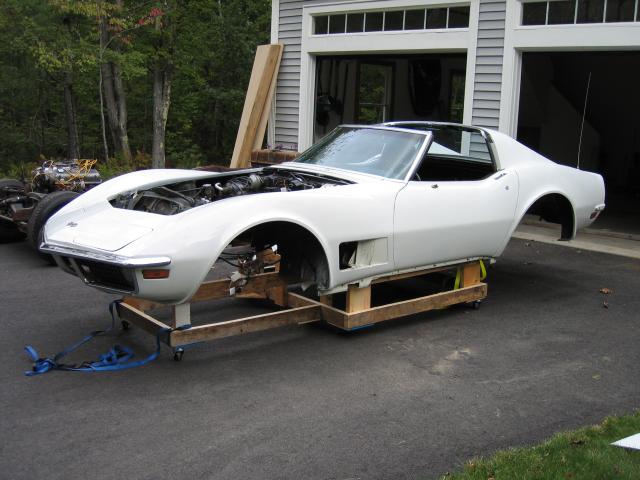 To start the bumpers, grilles, marker lights and other miscellaneous trim pieces were removed form the body. Some of these components, such as the drivers side grille, will need to be replaced since they are damaged beyond repair or rehabilitation. 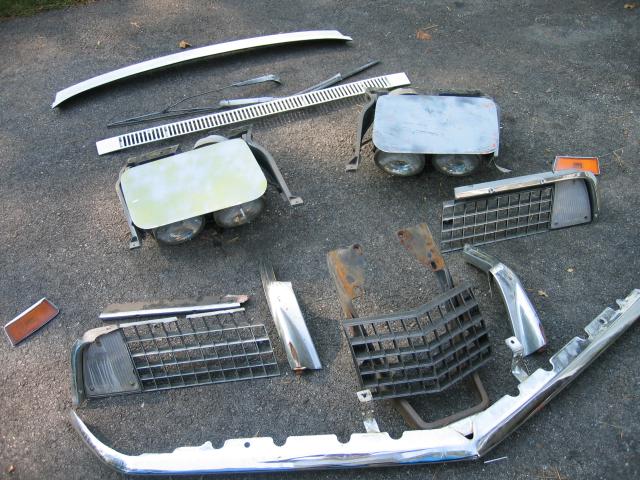 After doing a fair bit of research I grew pretty wary about using a chemical paint stripper. Since fiberglass is more porous than steel there is the potential that the stripper can soak into the body panels and eventually seep out (if the car were parked in the hot sun for instance) and destroy the paint from the inside out. Apparently even using a neutralizer after stripping doesn’t solve the problem 100% of the time. Abrasive blasting with walnut shells, or a similar material, also presents issues since it’s difficult to remove the paint without damaging the underlying fiberglass. That, combined with the fact that I don’t know anyone qualified to do this work in my area, ruled out abrasive blasting as a paint removal option. My research did uncover several success stories where the paint was removed using a razor blade. I wasn’t real comfortable with the thought of taking a razor blade to my body panels, but considering the alternatives I figured it was worth a shot. After all, I’d be pretty upset if a year down the road my fresh new paint job was getting eaten up by paint stripper seeping out of the body panels. That said I ultimately decided on the razor blade technique and decided to start with the hood. I figured the fairly flat surfaces would make for relatively easy stripping. Besides, although it wouldn’t be cheap, if things went really bad the hood could be replaced (although not cheaply). 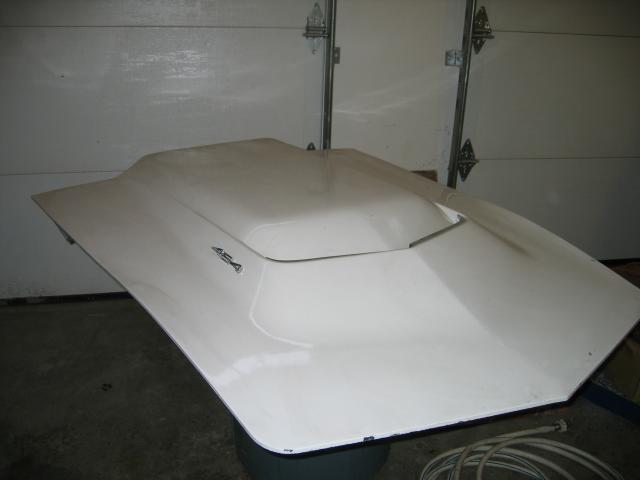 I must say I was pretty amazed at how easily the paint came off! Maybe it was just the crappy paint the car was painted with, but it was almost jumping off the hood! In about 30 minutes the hood was almost entirely stripped and I snapped the photo below. At this point all that’s left is removing the paint from the odd angles and tight spaces that the razor blade couldn’t get to. I’m not quite sure how the heck I’ll accomplish that (sandpaper maybe?) so I’ve decided to put it off until later… 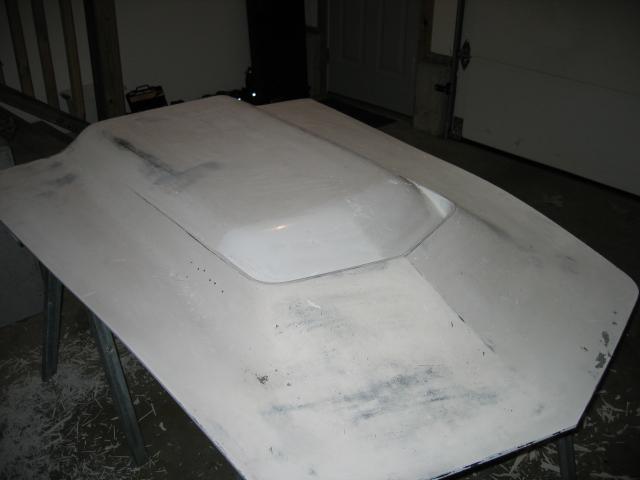 And, since I’m sure everyone would like to see the razor blade in action, here’s a video taken while stripping the rear deck. Granted, the fenders and other curved surfaces didn’t go quite as quickly but it’ll give you an idea of how the razor blade works.

After about 8 hours of stripping, here’s what I ended up with. Similar to the hood I still need to get to some of the hard to reach places, but overall I was very pleased with my progress. And best of all I didn’t have to deal with the smell, fumes and mess that would have resulted from using a chemical paint stripper. In the photos you can see several dark spots on the body. These are all areas where the last person who painted the car got a little too aggressive while sanding and went too deep resulting in exposed fibers. Each of these areas will need to be touched up and sanded smooth in order to provide an acceptable surface for painting. 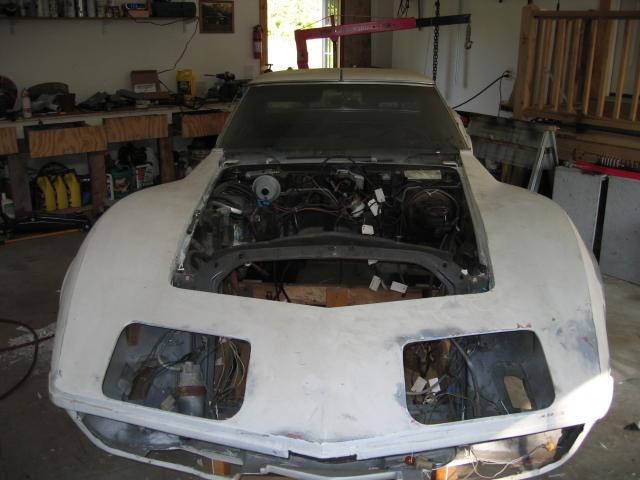 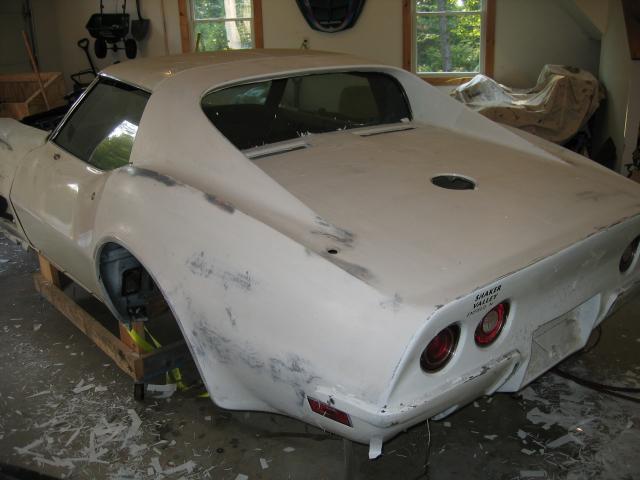 So there you have it! The razor blade technique works pretty good for stripping paint in my book! I still have about 10 or so hours of stripping ahead of me to finish things up, but this is a great start! Stay tuned for the next update where I’ll provide some additional photos of my progress.