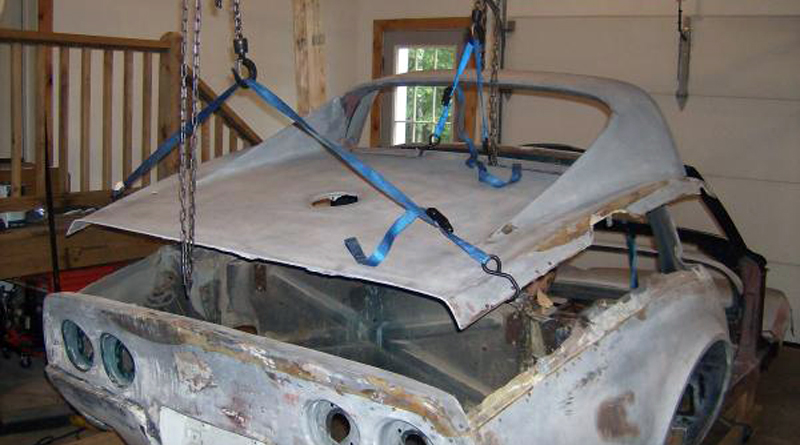 In the last update the replacement rear deck had been prepared for installation on the car. In this installment my work will now focus on removing the old rear deck from the rear clip. As you may recall, the existing rear deck had some extensive areas of shoddy repairs that would have been a tremendous amount of work to remove and repair properly. Rather than try to repair these areas I was fortunate to find a good used rear deck in excellent condition for a very reasonable price.

With the replacement rear deck prepared and nearly ready for installation my focus turned toward the task of removing the old rear deck from the rest of the body. As usual, I’ve provided photos and a narrative of my process below. However, in addition,  I’ve also produced a how-to video illustrating this process and posted it on my YouTube page. To view the video, simply click the embedded movie player below.

My plan is to develop more of these how-to videos as my restoration progresses so if you have ideas for more videos please let me know!

So, back to my normal update… Starting the removal is typically the hardest part of this process. However, in this instance, the corner just above the door jamb served as an excellent starting point. 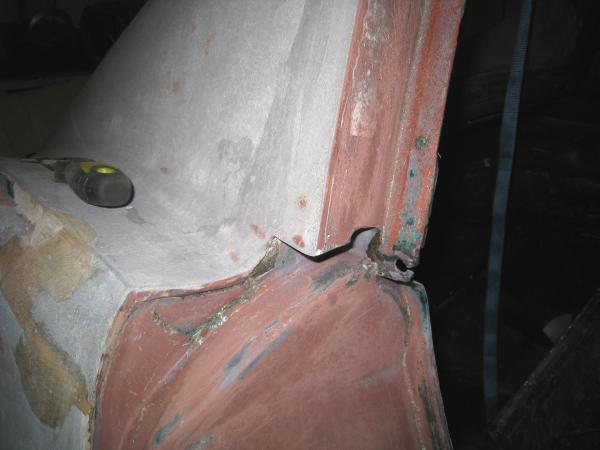 Before starting it’s a good idea to get a good sense of exactly where the bonding seam is. This will allow you to avoid damaging the actual fiberglass – the goal here is to separate the panels right down the bonded seam without splitting or otherwise damaging the body panels.

To reveal the seam a 200 grit sanding block was used to sand away the remaining primer. 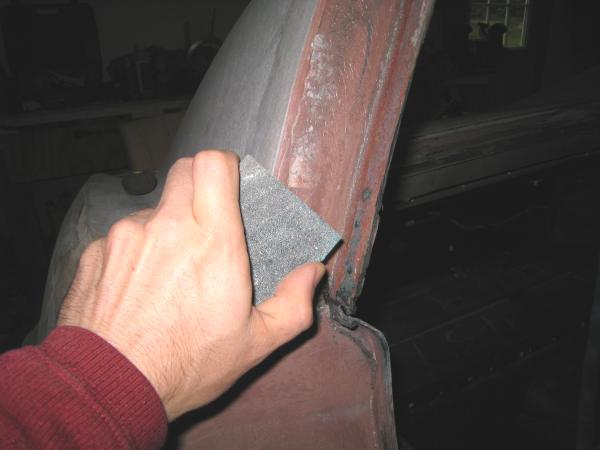 With the primer fully removed the location of the seam became very obvious. In the photo below the seam shows up as a pinkish-colored strip between the edge of the gray panel on the left, and the face of the gray fiberglass on the right. In this instance the separation process was started with my putty knife positioned closer to the left side of the joint. The panel on the right has a rounded edge that’s partially filled with extra bonding compound so the actual seam is thinner than it appears in this photo. 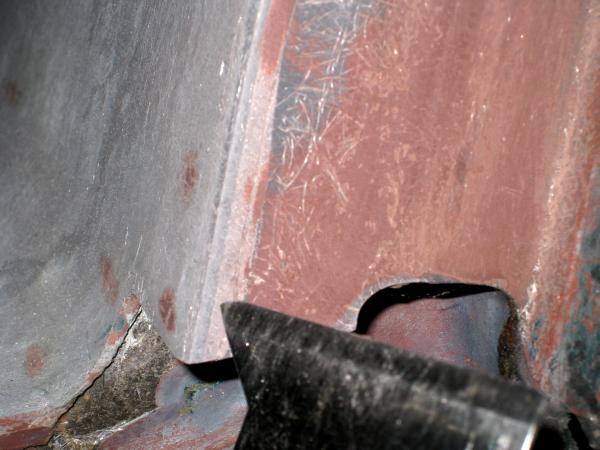 With the bonding seam and our starting point identified it’s time pull out the heat gun to facilitate the separation process. As noted in the previous update, when it comes to removing bonding compound heat is your friend. Heating the seam to a hot temperature (hot enough that you wouldn’t want to keep you hand on the fiberglass for more than a half second or so) causes the bonding compound to soften considerably. Once softened the panels can be separated fairly easily with a much lower risk of damaging the body panels.

For those who haven’t worked with a heat gun before, it’s basically a high powered hair dryer. There are various models available, but any inexpensive model should work fine for this process. For more information please see my previous update.

Using my heat gun a six inch long portion of the bonded seam was heated. As noted in my last update, I made sure to keep the nozzle of the heat gun a few inches from the surface of the fiberglass while keeping the heat gun moving at all times. I didn’t want to risk scorching any components that would need to be salvaged later. 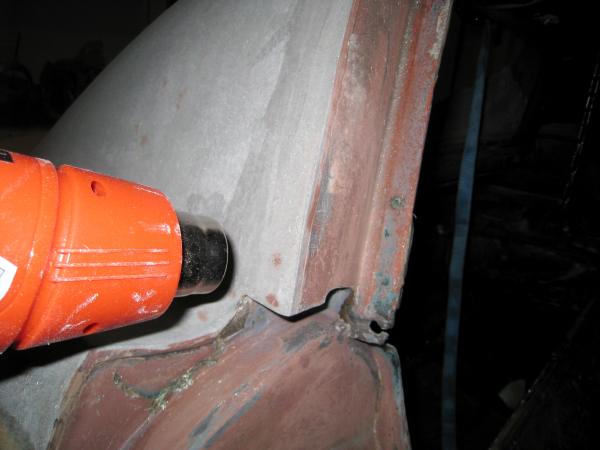 In my case simple hand pressure was sufficient to separate the seam. However, if needed, a few firm taps with a rubber mallet at the end of the 5-in-1 tool would help start the separation process. If the seam really doesn’t want to separate try moving the 5-in-1 tool a bit; you may be hitting a fiberglass panel instead of the bonded seam. This is certainly an area where it’s easier to try from several different angles than it is to repair a splintered fiberglass panel. 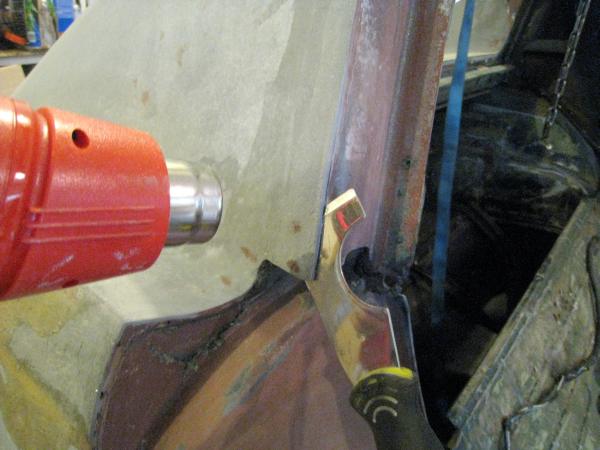 As the two panels separated I continued to apply heat and pressure to the 5-in-1 tool. Once the full length of the heated area was separated I heated the next six inches and repeated the process until the panel was completely separated. 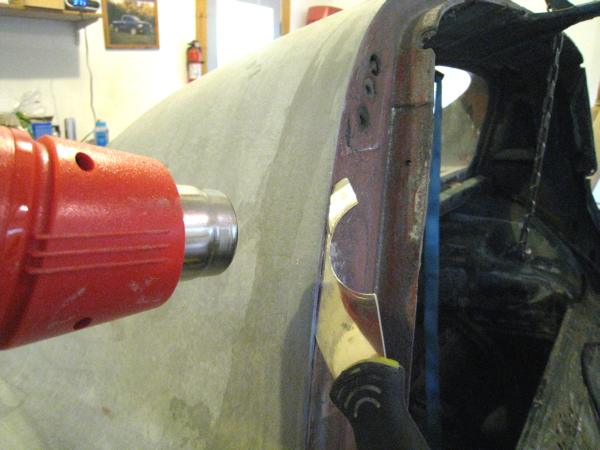 Splitting the seam along the top of the door jamb was the toughest spot of all. Here I initially used a good amount of heat along with the pointed tip of the 5-in-1 tool to begin the seam separation. With the 5-in-1 tool I used a gentle prying motion in an attempt to force the panels apart. Although some separation occurred, it became apparent I wouldn’t be able to fully separate this area until after all of the adjacent seams had been separated. After separating the adjacent seams this area eventually came apart with another good dose of heat and a bit more gentle prying. 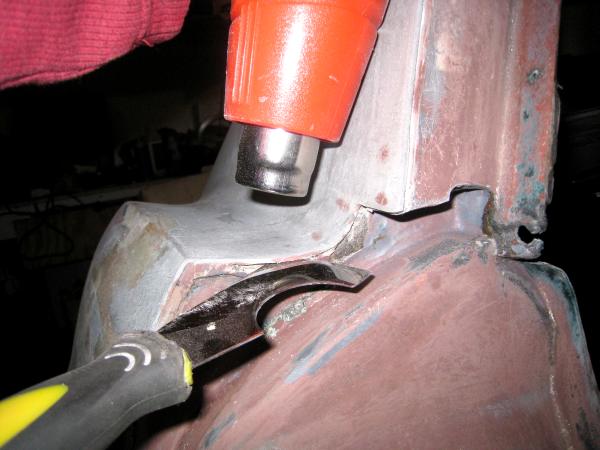 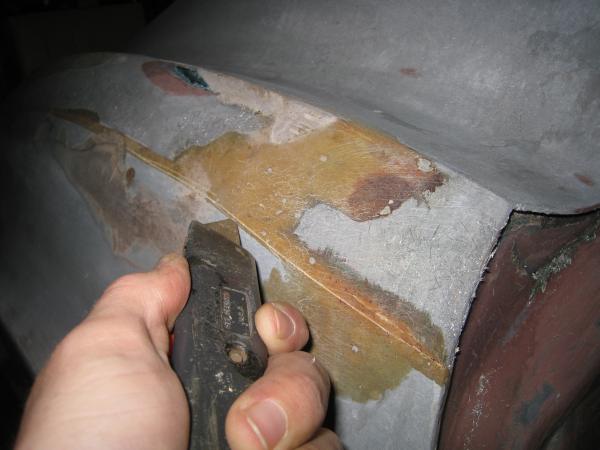 With the seam scored the process of separating the panels here is exactly the same as before. Just heat the surfaces and use a 5-in-1 tool or putty knife to separate the panels. 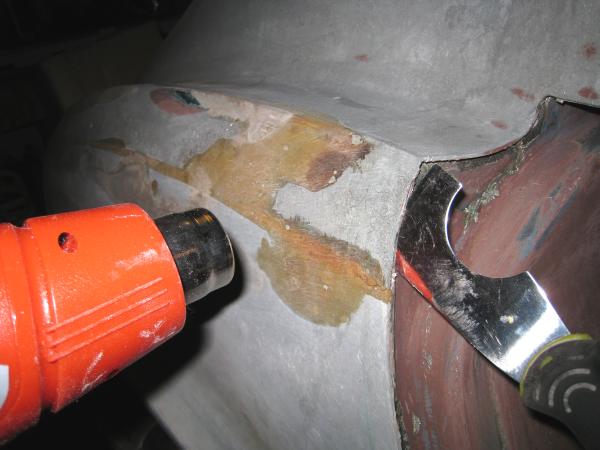 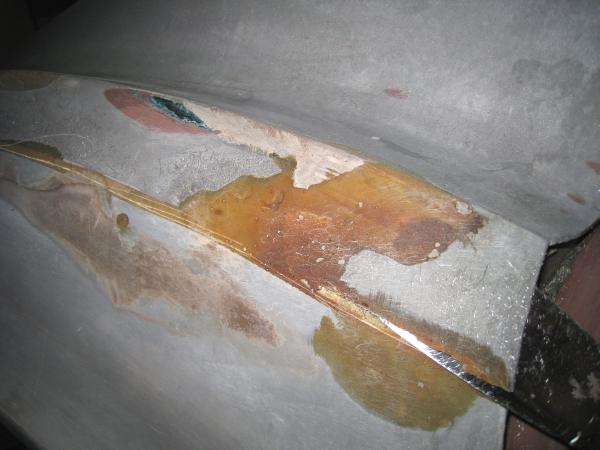 As I neared the back of the rear deck the separation effort started to become much more significant. The numerous angles and joints in this location made separating the various panels without damaging the fiberglass bonding strips pretty tough. Since in my case the existing rear deck is going to be scrapped I accelerated my work by using a jigsaw to cut along the rear lip of the deck. The jigsaw worked quite well, but the fiberglass made for tough cutting. The wood blades I started out with didn’t last long at all – they were quickly dulled. However, I found metal cutting blades worked quite well for this task. 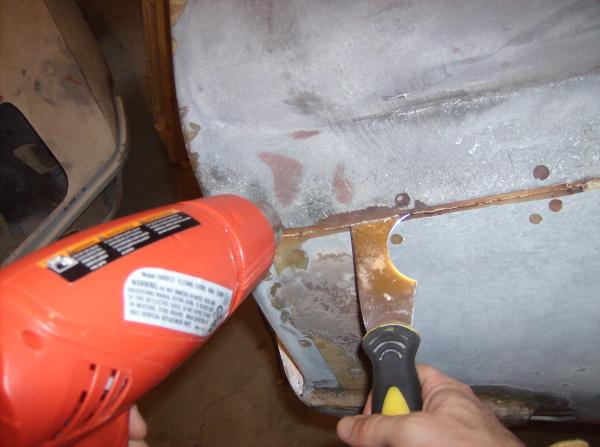 With the remainder of the deck lid free the only connection point remaining was where the rear wall of the passenger compartment is bonded to the underside of the rear deck. Although applying heat to the area was a bit more cumbersome, separating the seam wasn’t too difficult. After applying a good amount of heat I put several putty knives to good use and was able to pry nearly all of the surfaces apart.  However, there was one area that gave me a bit of a headache. Above the passenger side rear body mount it’s apparent that someone completed some fairly shoddy repairs some time ago. Evidently they decided to skimp on fiberglass mat since they felt they could just use bonding compound as a great filler material. Suffice to say the compound was everywhere and my putty knives were proving pretty ineffective in this area – they just couldn’t reach far enough, or conform to the curves of the body, to separate the panels in this area. 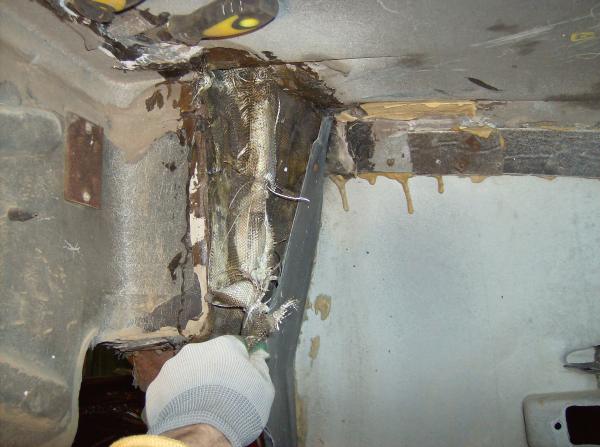 After quite a bit of effort with the putty knives I decided to take an different approach. I quickly cut out an area of the rear deck right above the fender seam (remember I’m scrapping my rear deck) and then clipped the hook of my chain hoist to the rear deck. 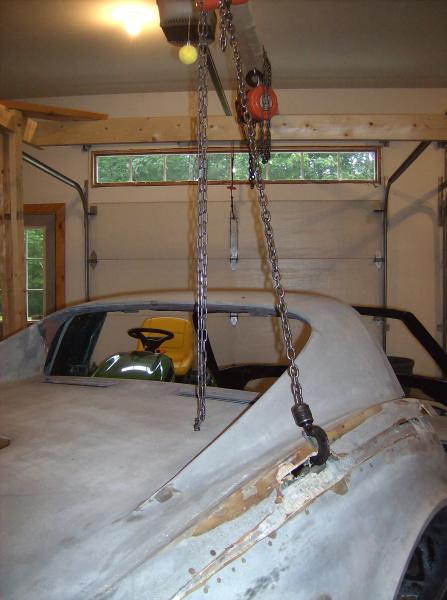 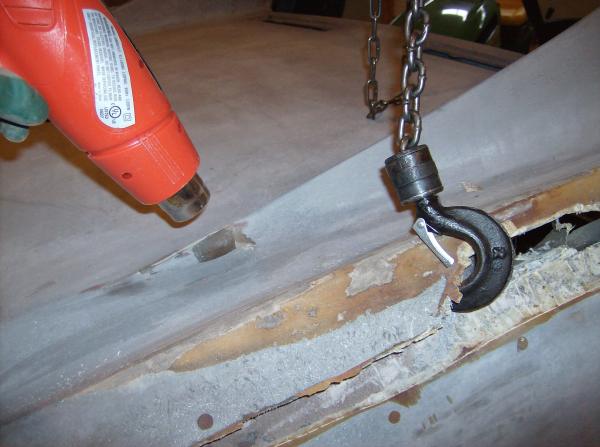 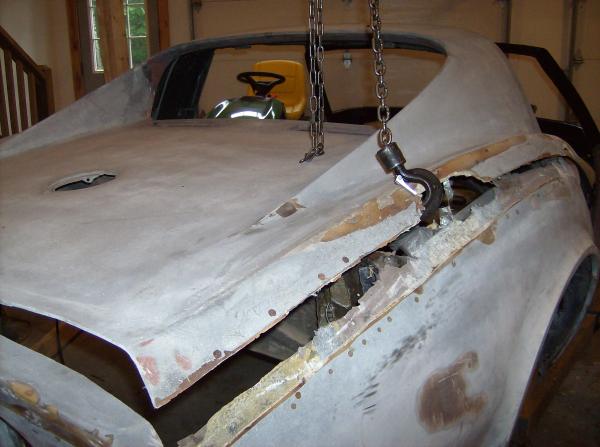 With the rear deck free from the body I used my two chain hoists to lift the rear deck up and out of the way. This could have easily be done with two people, but… 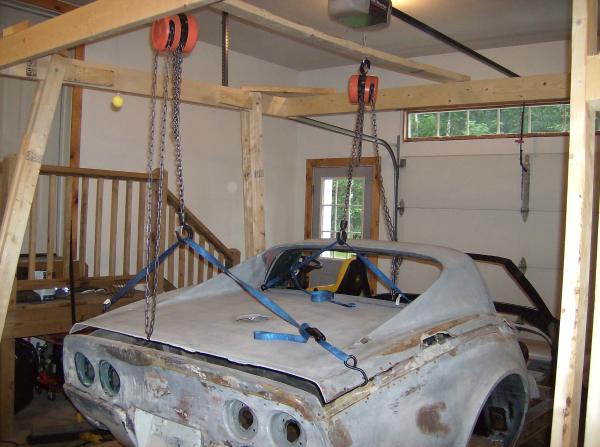 …my little helper really likes to use the chain hoists! 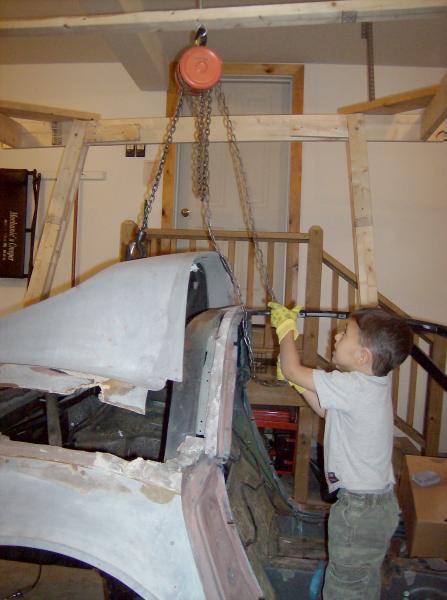 As I quickly learned, don’t forget to loosen the clamps securing the rear plenum drain hoses! 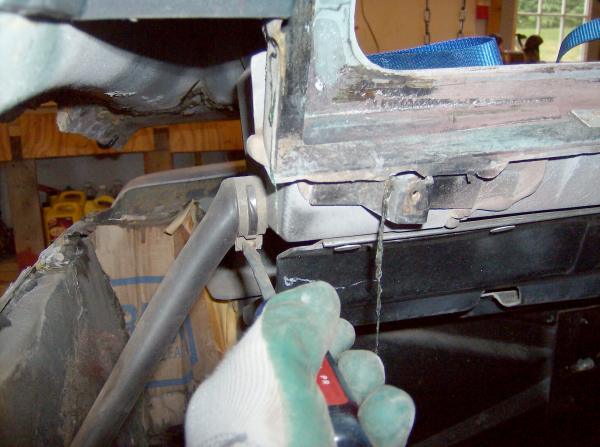 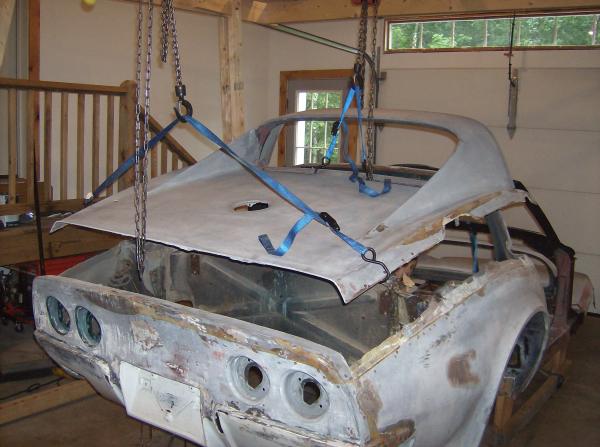 With the rear deck removed it’s much easier to see how the rear of the fiberglass body is all bonded together. Below are a few shots of what most folks never see. 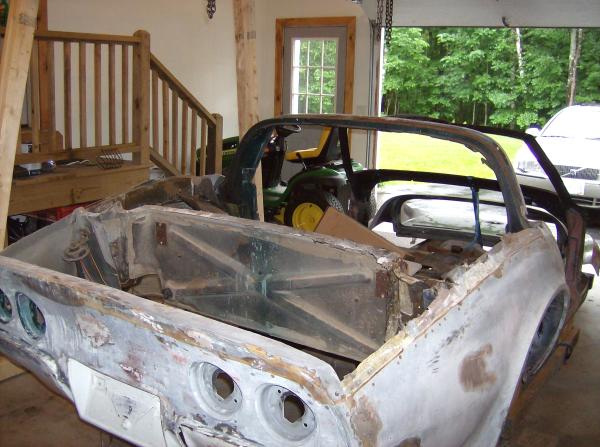 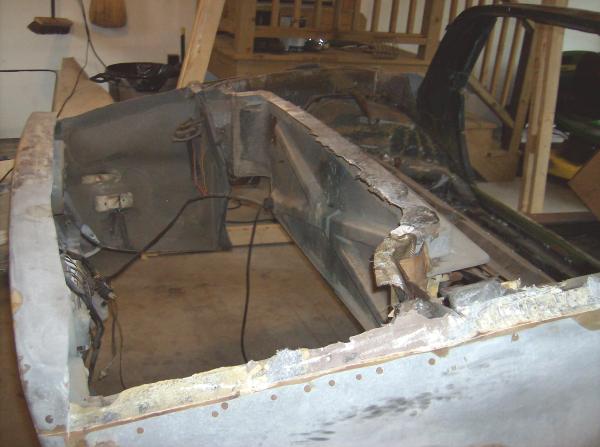 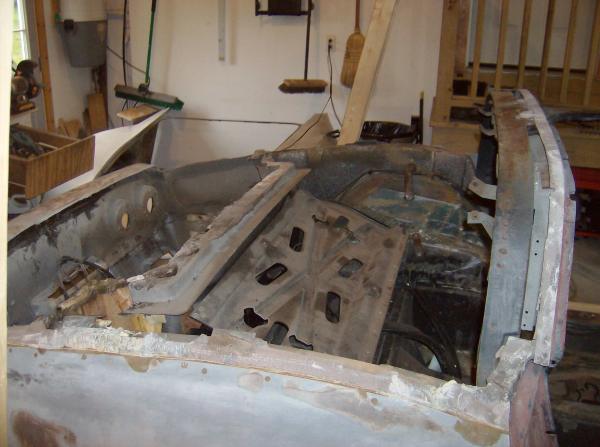 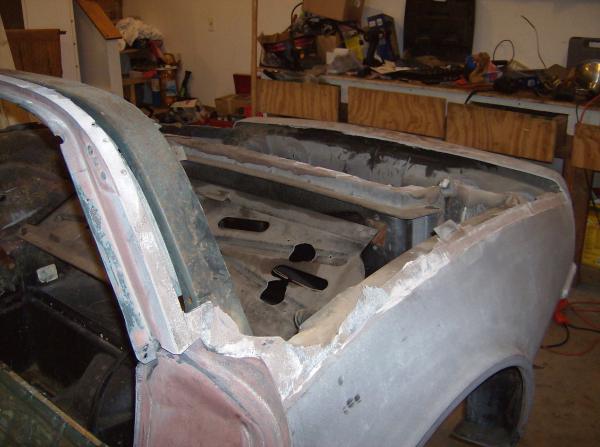 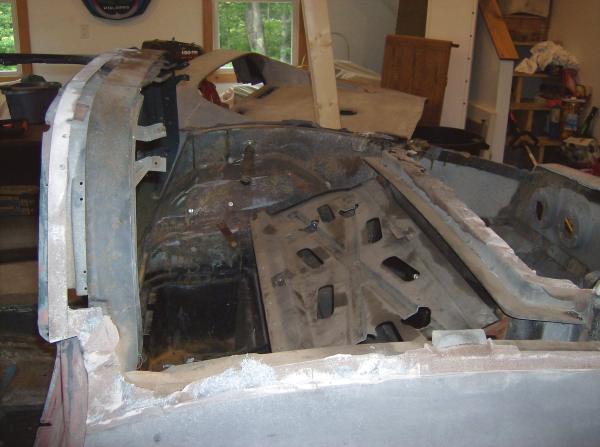 With the rear deck removed I finally had an opportunity to get a closer look at those shoddy repairs completed around the passenger side rear body mount. From the damage it’s apparent that the car was hit in the rear quarter panel at some point. Unfortunately, the repairs proved to be very substandard. This whole area will need to be rebuilt. 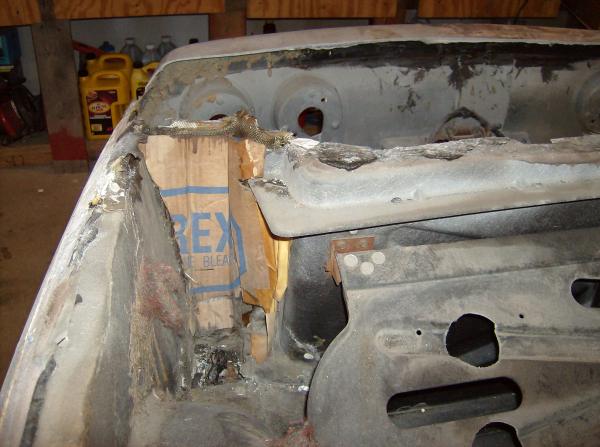 In the end removal of the rear deck only took about three hours – much faster than I had anticipated. And, with the rear deck out of the way, it looks like my next update will include some pretty significant fiberglass reconstruction efforts. Check back soon for the next update!