Now that the fiberglass repairs to the rear clip have been finished the focus of the restoration effort has now been switched to replacing the damaged tail lamp panel and rear quarter panel (rear fender) which are damaged beyond repair.

To complete this work, it was first necessary to remount the body to the chassis. This is an important step which helps ensure the final body lines and door gaps will be properly aligned. So, once again the body was hoisted into the air, the chassis rolled beneath, body shims installed in their original locations, and the body lowered onto the chassis and bolted into place. The lifting frame I developed and constructed several months back is starting to come in quite handy (you can find plans for the lifting frame here). 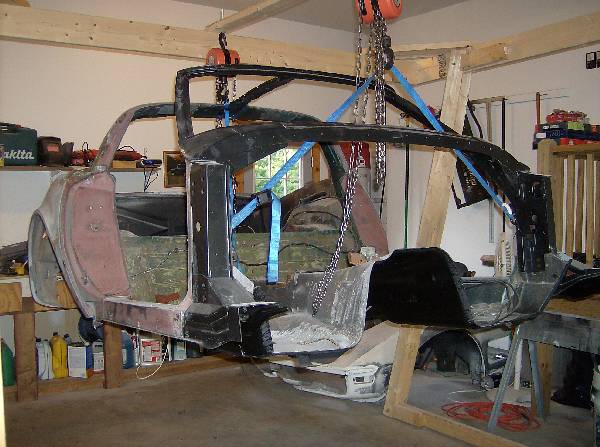 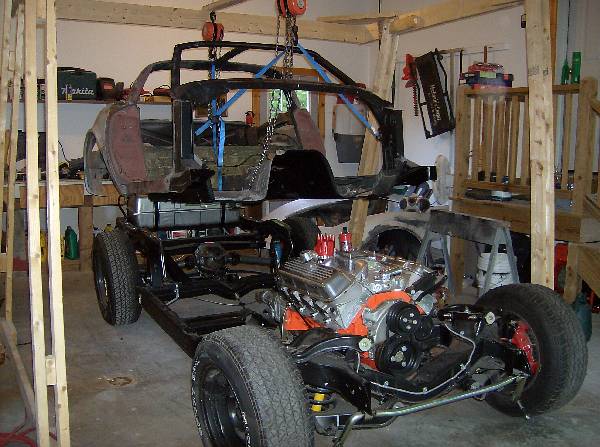 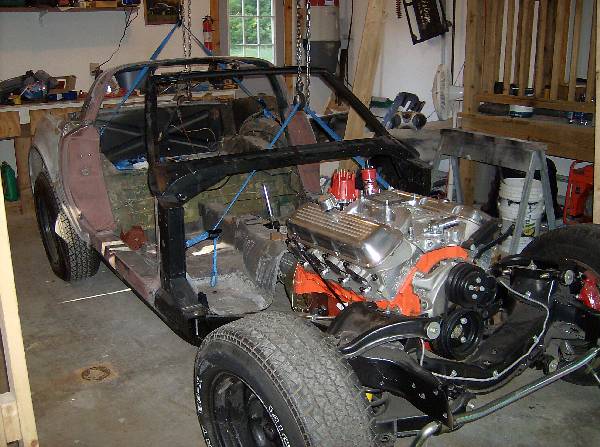 With the rear clip of the Corvette back on the chassis it was time to remove the body panels that need to be replaced. In the case of this restoration that includes the rear tail lamp panel and the rear quarter panel (rear fender). Both of these panels have a fair bit of collision damage and would require significant fiberglass repairs. A pro probably could have repaired these panels with enough time and patience. However, I’m no pro so I decided to replace the panels and save myself the time and aggravation.

And, for what it’s worth, yes all of these required body repairs have turned out to be much more significant than I originally anticipated. If I had this to do all over again I’d pay A LOT more attention to the condition of the body and really scrutinize it for signs of damage.

To start the removal a jigsaw was used to cut out the center portion of the tail lamp panel. Removing this center portion will make managing the remaining sections of the panel a bit easier. Be sure to use a bi-metal blade in your jigsaw, they make quick work of this task and stay sharp much longer than other types of blades. 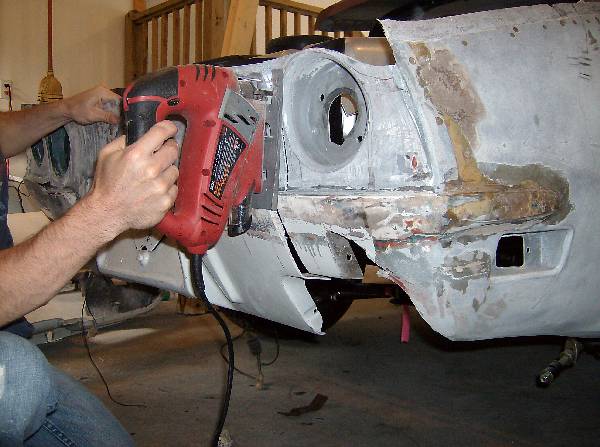 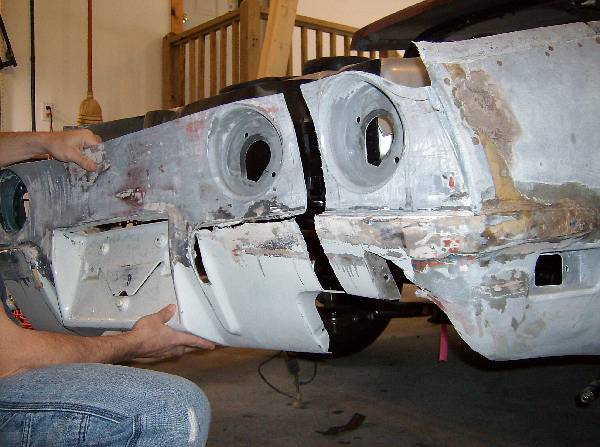 Once the center portion of the tail lamp panel was removed a heat gun and 5-in-1 tool were used to soften and release the bonding strips connecting the panel to the rear quarter panels. 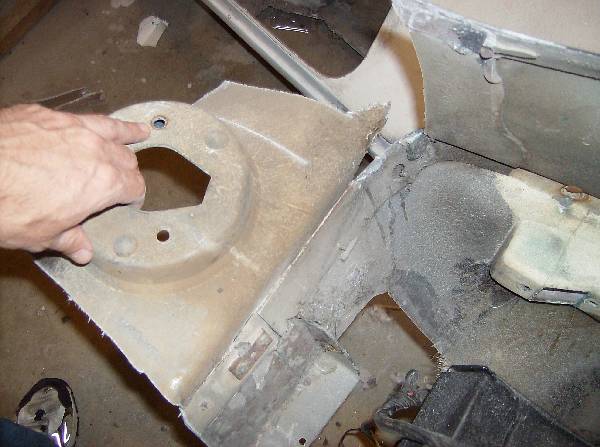 The same process was used to remove the passenger side quarter panel. My decision to remove and replace the rear quarter panel was quickly validated as I soon discovered the panel had been previously removed and bonded back into place using some mystery adhesive (the yellow stuff in the photo below) that I can best describe as some sort of polyurethane foam. This adhesive wasn’t very strong at all and gave out VERY easily when heated with a heat gun. 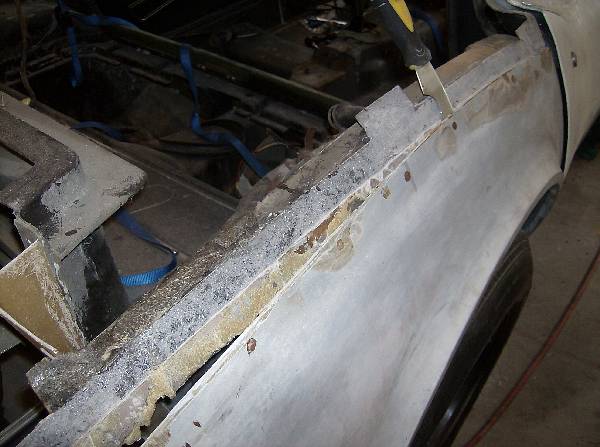 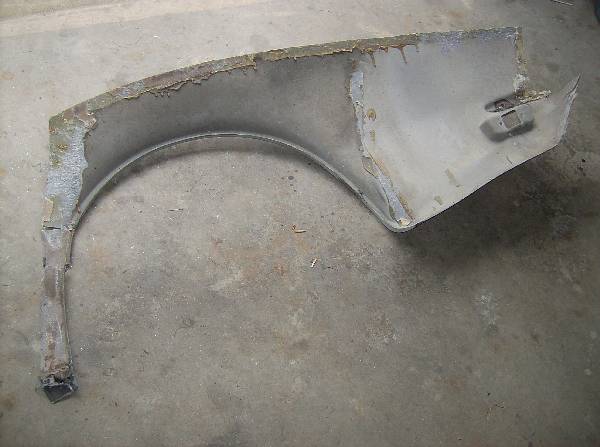 With the rear fender removed it was obvious that significant cleanup of the rear quarter panel bonding strips was required. Much of the strip was covered with the yellow mystery adhesive with a few other types of bonding materials mixed in for good measure. 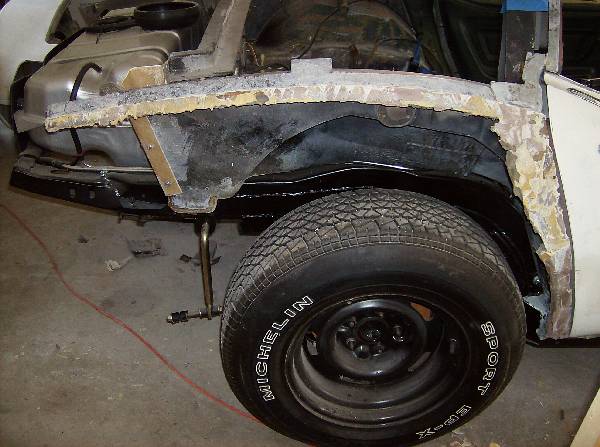 So, once again I put my heat gun and 5-in-1 tool to use scraping the bonding surfaces clean. 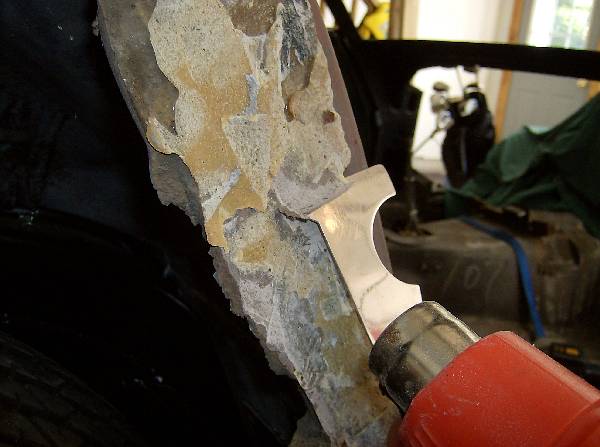 Soon after I had removed the rear deck I noticed something peculiar about the bonding strip for the passenger side rear quarter panel. Not only was it bonded in a slightly different position than the drivers side, but it was also glued into place using yet another mystery material. This one was black and relatively flexible, sort of like roofing cement. Sure enough a further inspection revealed this to be yet another bogus repair so I set to work removing the bonding strip to allow a proper repair. One thing is for certain, whoever fixed this car way back when was quite the hack. 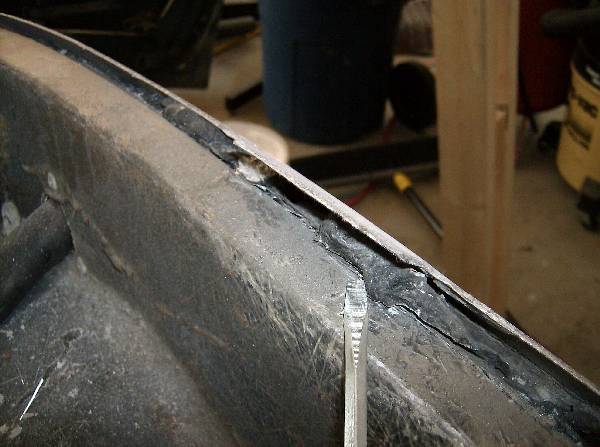 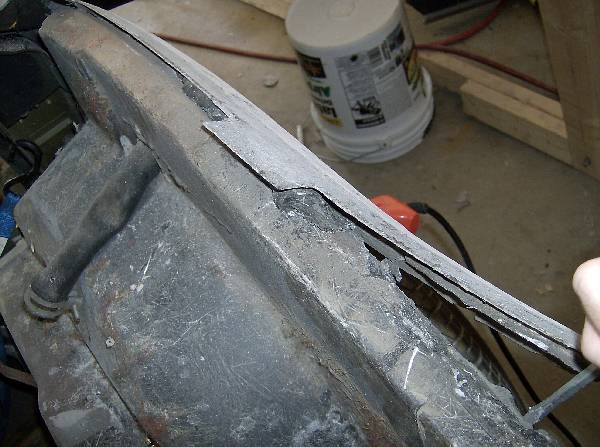 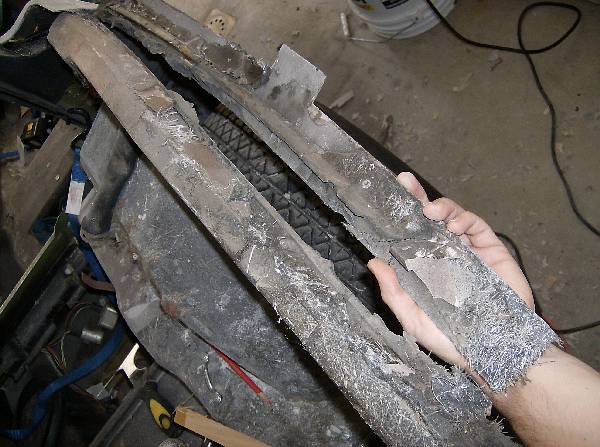 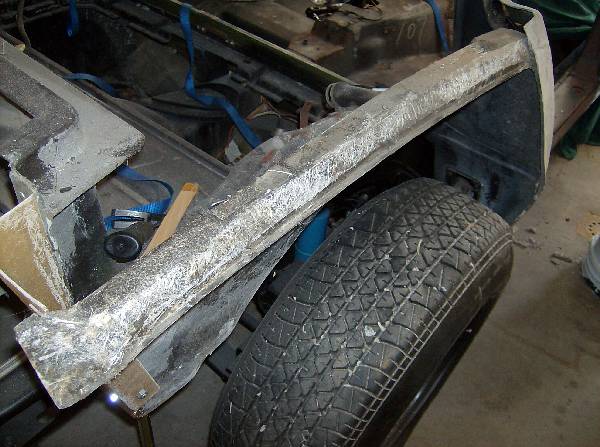 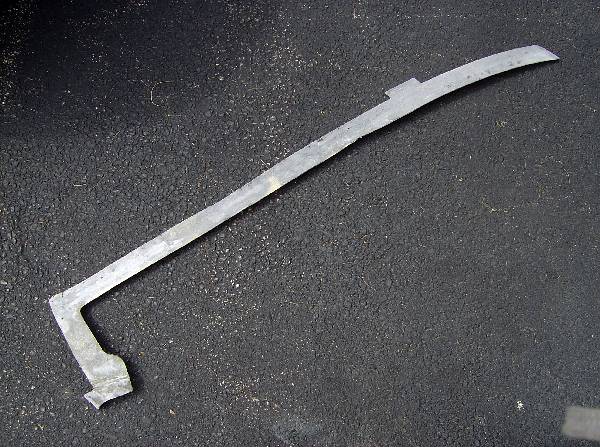 Finally, after lots of disassembly, it was time for a bit of reassembly. As I thought through the assembly process it became clear that gluing the rear quarter panel bonding strip directly to the fender well was not the way to go. First, if the strip were not positioned correctly front to back, the vertical bonding seam between the tail lamp and rear quarter panels may not line up correctly with the bonding strip. Secondly, I was not sure I’d be able to glue the bonding strip to the fender well at the correct angle since it slopes in two directions – front to back and side to side. 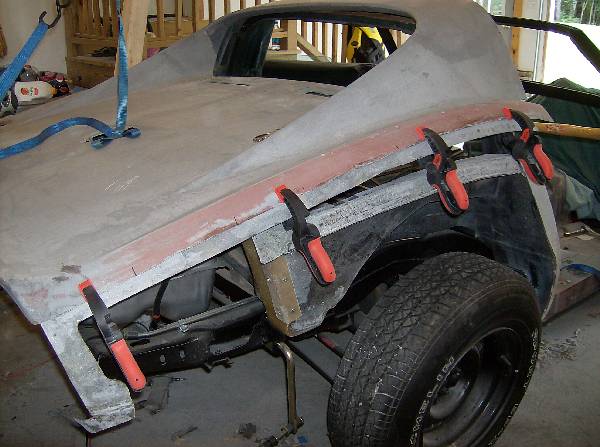 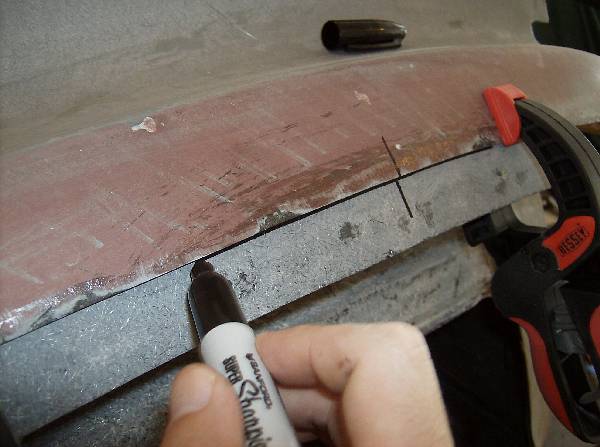 After the dry fit was complete the surfaces were cleaned with lacquer thinner on last time in preparation for bonding. 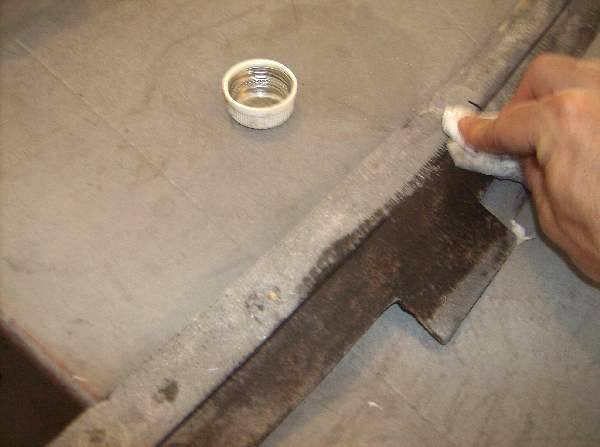 To bond the two panels together a high strength epoxy adhesive was used in lieu of the traditional bonding compound. Although more expensive, the epoxy adhesive is stronger, more convenient, and allows a longer working time (depending on the product selected). For this project I’m using Fusor 127EZ manufactured by LORD Corporation. This is a two part, slow setting, high strength structural epoxy adhesive with a 50-60 minute work time. In addition, this is an OEM approved material (meaning it’s approved by GM) for SMC and composite panel replacement. NOTE: Per the manufacturers literature you cannot apply polyester based body fillers over this material. You first need to prime the area with a suitable primer.

Once selected, I ordered a few tubes of the adhesive (each tube comes with two mixing nozzles) as well as the required dispensing gun. Note – You are able to recap the tubes of adhesive allowing you to save any unused portion for later. So, if you expect to be gluing lots of small pieces together at different times, you may want to order some extra mixing nozzles (or you can simply dispense the unmixed adhesive onto a piece of cardboard, mix it manually, and then apply it with a putty knife). 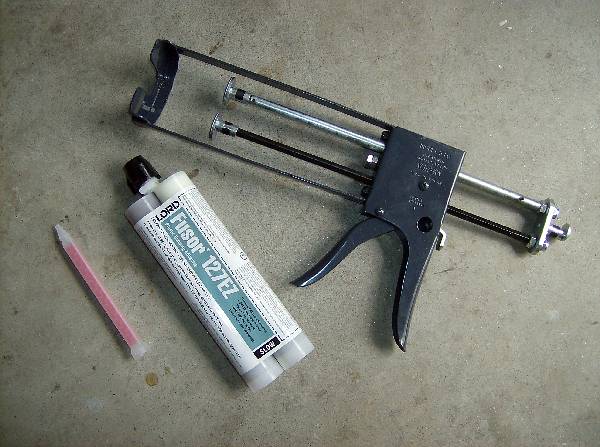 Following the manufacturers directions the tube was loaded into the dispensing gun and a small amount dispensed onto a scrap piece of cardboard. This step levels the plungers and ensures that adhesive is coming out of both sides of the cartridge. 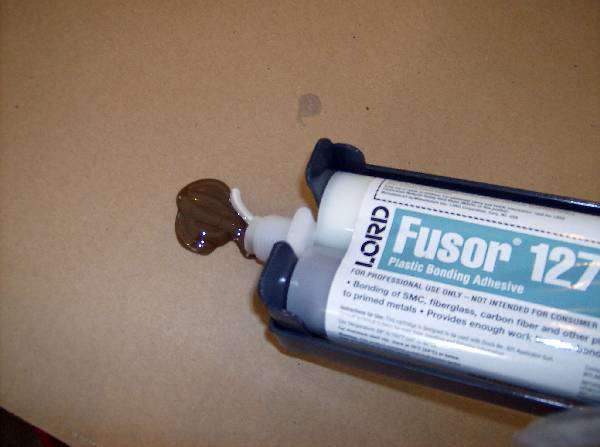 Next the mixing tip was attached and another small amount dispensed onto a scrap piece of cardboard to ensure even mixing of the two components. 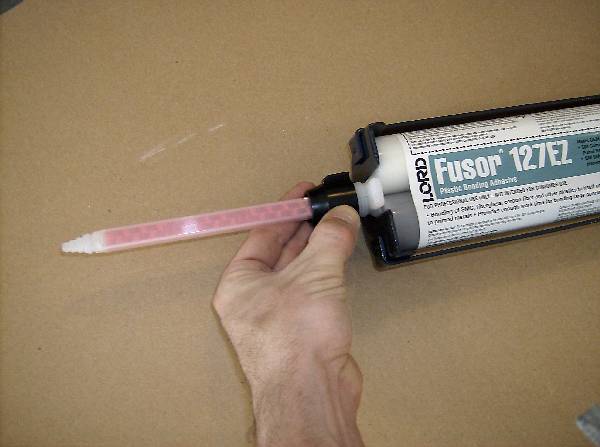 Now that the adhesive and dispensing gun was set to go a generous bead of adhesive was applied along the full length of the bonding strip. 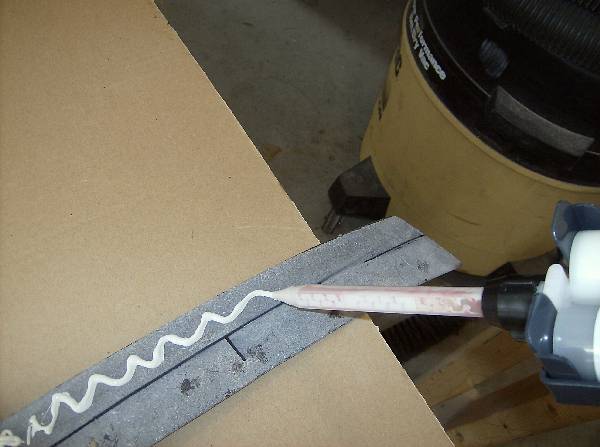 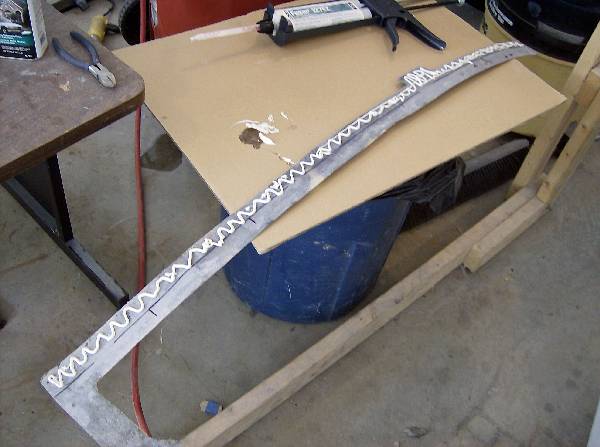 It’s critically important that you dry fit all of your pieces ahead of time and that you make certain that the alignment of each piece is correct before you apply any adhesive to the pieces. Despite the relatively long working time of the adhesive, it’s extremely strong and the fiberglass panel will most likely split before the adhesive gives out. This means if you mess up, you’ll have a lot of work ahead of you to fix it! It’s just a lot easier to dry fit everything ahead of time. 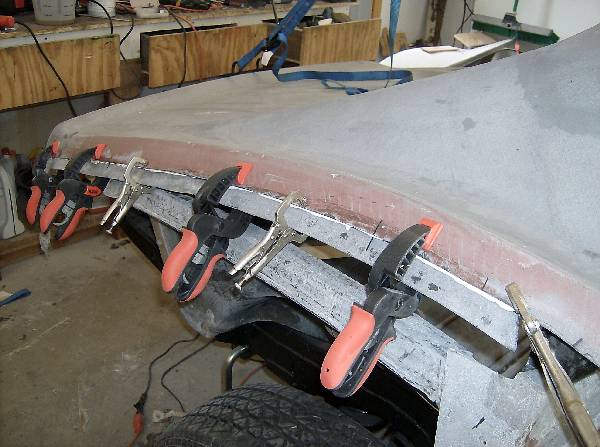 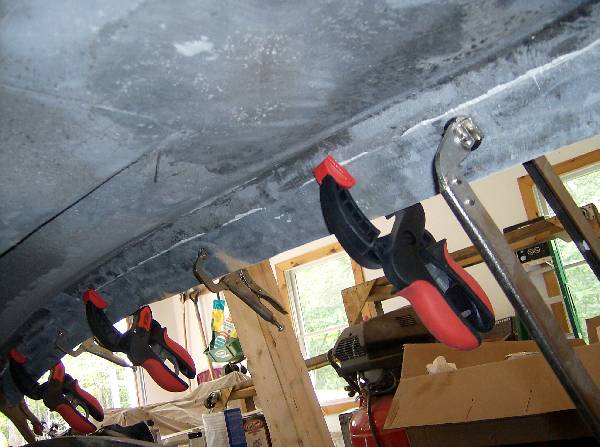 Finally, before leaving the adhesive to set up overnight, I removed the excessive adhesive that had oozed out from the outside face of the bonding strip. Since this excess adhesive would need to be removed later down the road I figured it was easiest to remove the extra now before it was hardened. 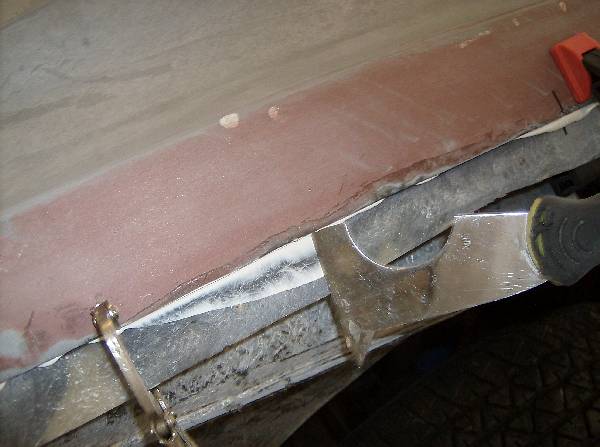 The next step of the restoration will include gluing the rear deck back onto the rear clip – a definite milestone! Stay tuned for another update in about a months time.

In the meantime, why not stop by the new Corvette Restoration Forum I’ve developed. Already there are a number of great new members and, as with any forum, the more the merrier! I’d love to see each viewer here become a member and post their projects, ideas, and questions. It’s free so why not stop by to say hello?