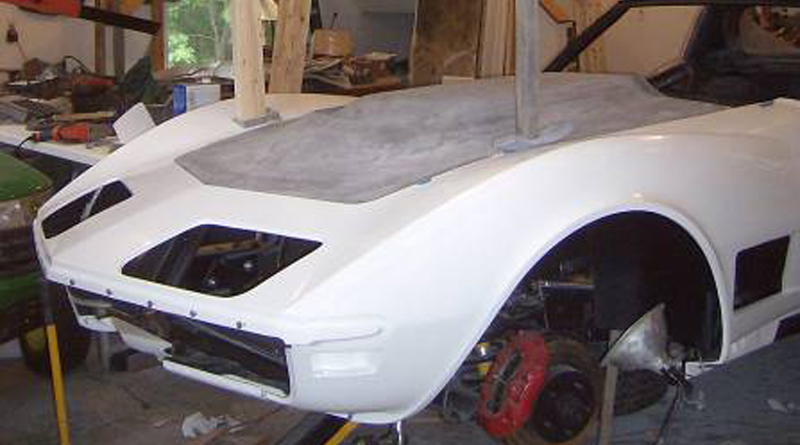 In this update progress on installing a new one piece front clip continues. In the last update the radiator support and fender skirts were positioned in their approximate locations, the front clip was loosely set in place and then adjusted front-to-back. 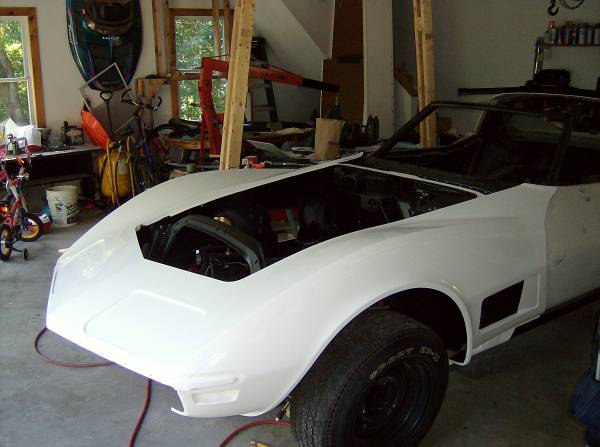 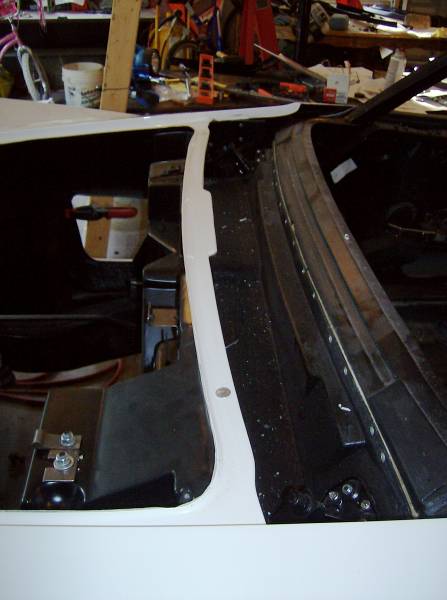 Once the front-to-back position of the front clip was adjusted it was time to fit-up the rest of the clip. However, before the fit could be fully checked the edges of the clip needed to be trimmed along the leading edge of the doors. Given that the final position of the clip was still undetermined, only the absolute minimum amount of material ­­was removed in order to allow the clip to seat properly against the firewall flange. As shown in the photos below, before the clip was trimmed it was overlapping past the doors and not allowing the fender to sit tight to the firewall. 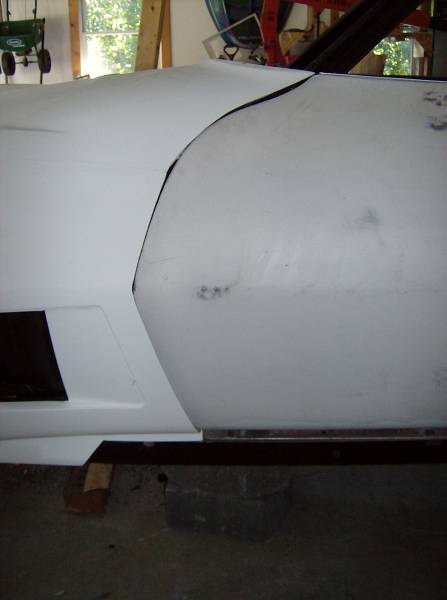 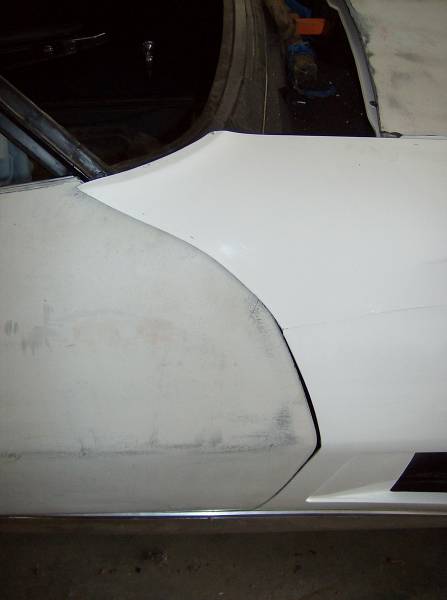 Here’s a photo of the passenger side fender trimmed just enough to clear the door. 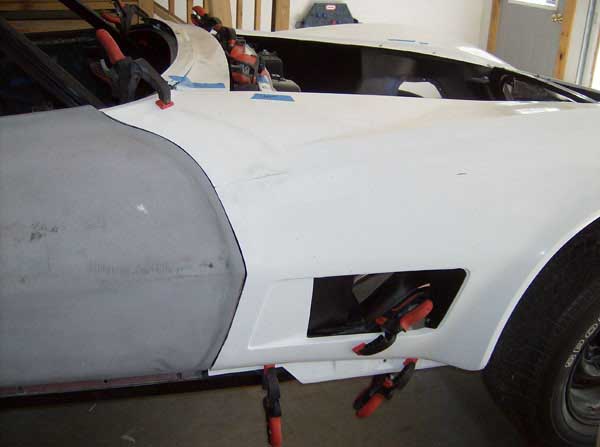 With the sides of the clip trimmed and sitting tight to the firewall flanges, my attention turned toward installing the windshield wiper door assembly. 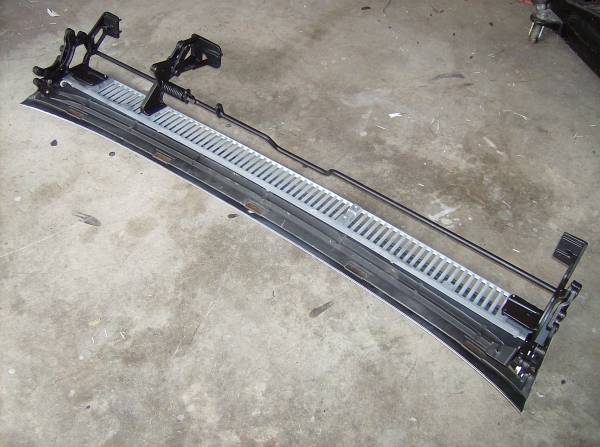 Step one involved trimming the flange of the front clip at each end of the wiper tub to provide clearance for the wiper door linkage. After taking measurements from the original front clip, the removal limits were marked out and the excess material was cut away using a Dremel. 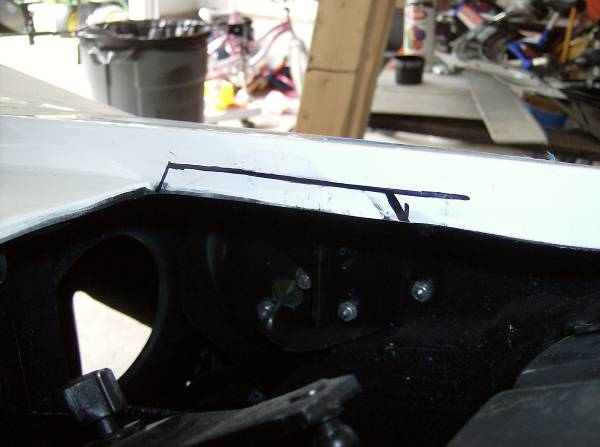 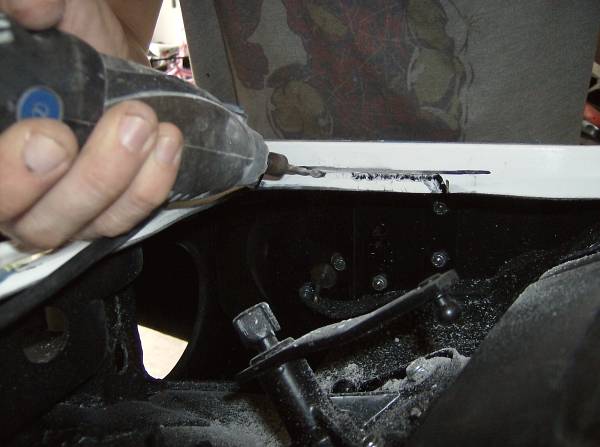 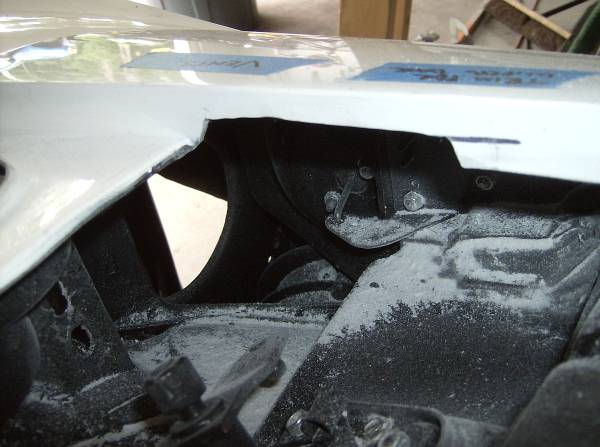 Once the cutouts were made the wiper door assembly was bolted loosely in place followed by the hood. Next, both components were adjusted so that the body caps were within factory specifications. The hood was adjusted first followed by the wiper door. Although the installation of the hood was fairly straightforward, the wiper door assembly took quite a bit of patience. In total, I must have removed and reinstalled it about ten times, adjusting the amount of shims used each time, before the fit was finally what it needed to be. All of the body gaps were set based on the Corvette Assembly Instruction Manual, pages of which are provided below for reference. Here’s a photo of the hood installed in its approximate location. One note – in addition to positioning the hood front to back and side to side, shimming the hood hinges may also be required. Installing shims between the hinges and underside of the hood allows you to set the top of hood flush with the hood surround near the front of the clip. Vertical adjustment of the hood position near the wiper door assembly is achieved by adjusting the strikers on the hood latch support assemblies. 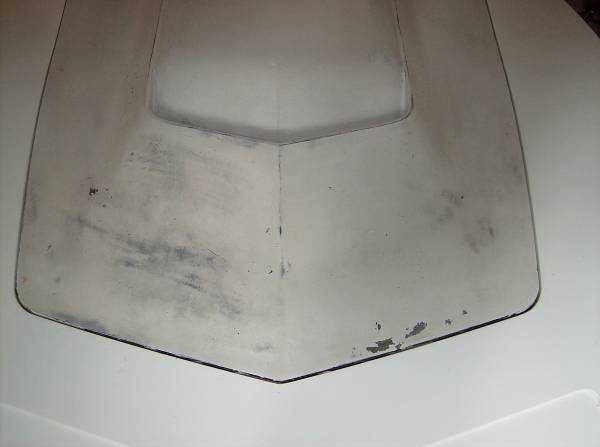 In addition, the hood surround support brackets, which are located on the front of the inner fender skirts, were also bolted in place. Once again a few shims were used to provide proper alignment between the hood and front clip/hood surround. There’s no need to buy special shims here – a few washers work just fine. 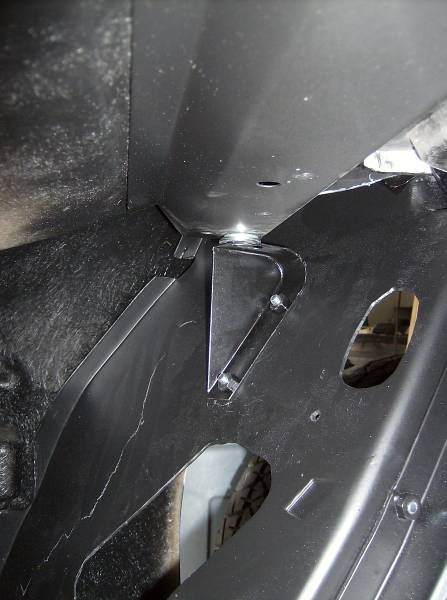 Overall I was pretty happy with the way the body gap along the driver’s side of the hood came out; it was fairly even along its entire length. 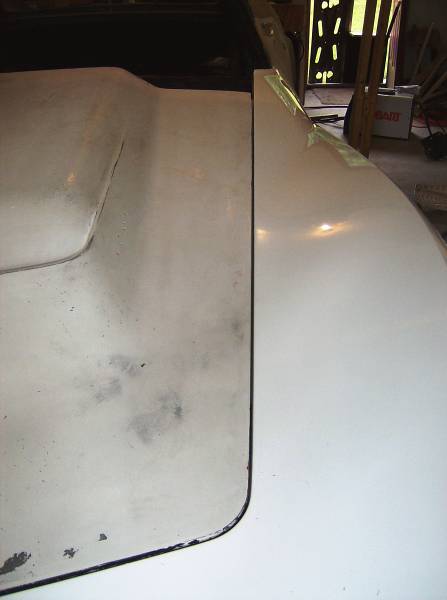 However, the passenger side wasn’t quite what it needed to be. Although it doesn’t really show up in this photo, the gap increased from about 3/16” at the nose of the hood to about 1/2” at the wiper door. Given that the wiper door fit perfectly and had a proper body gap on each side, this was obviously a problem with the width of the hood. A close inspection of the hood showed that it had been messed with in the past. So, it looks like this is another issue that needs to be addressed. 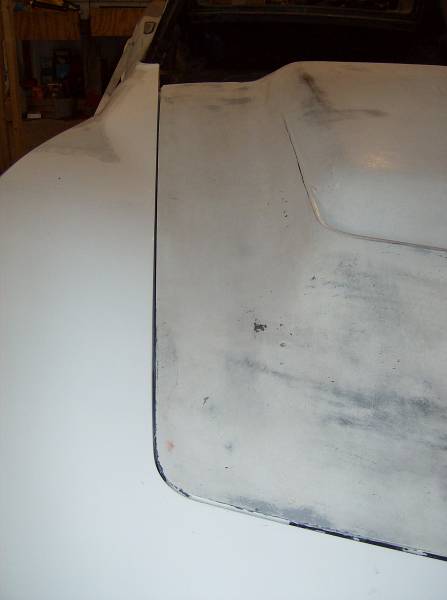 And, despite my best efforts to align the hood and to get he correct body gaps, there was a slight rub at the front corners of the hood when it was in the up position. There was no real apparent answer for this (other than removing some material from the hood or front clip) so for the time being I focused on some of the other items on the clip. This was simply a case of the radius on the hood not matching up with the radius on the front clip. 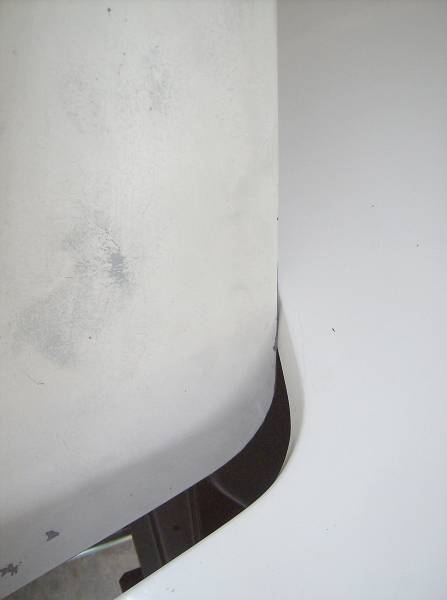 Next my attention moved back to the wiper cowl area. A photo of the wiper door assembly before final fit-up was completed is shown below (the gaps still needed to be adjusted when this photo was taken). As I worked through the fit-up process I quickly realized how many areas would need to be checked, and then rechecked later on. So, to avoid forgetting any of these areas, I started marking each area that needed to be revisited using a bit of painters tape with a short reminder. In the end these little notes turned out to be quite helpful. 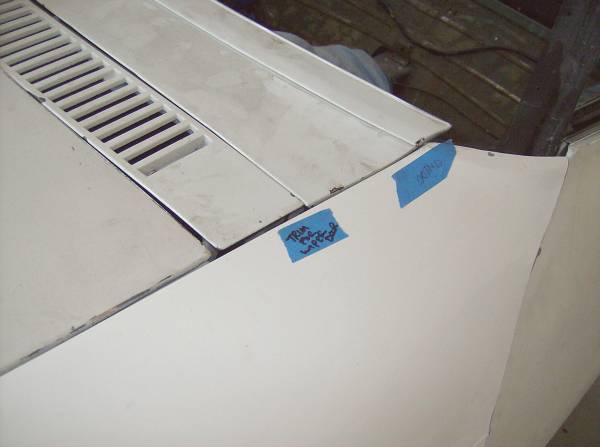 At this point I also quickly verified that the fender trim pieces would fit properly. The fit seemed ok, but it was obvious that a bit of adjustment would be necessary – mostly a bit of trimming at the rear edge of the fender. Needless to say I wasn’t going to do any final trimming at this early stage so I continued on checking other areas. 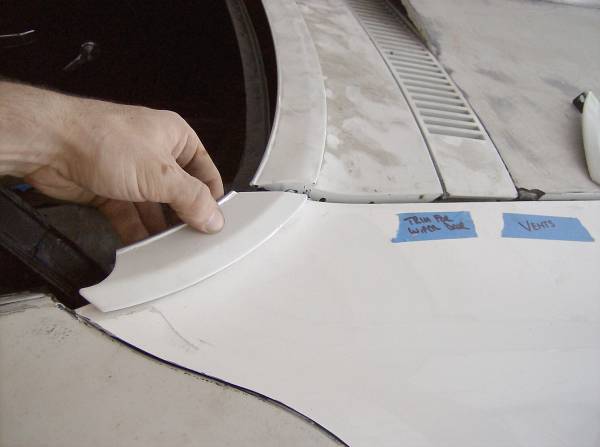 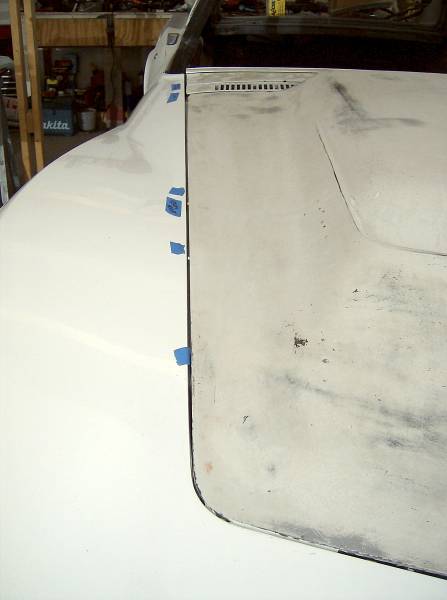 After reviewing the vertical alignment of the clip it became clear that the hood surround in the vicinity of the fender peaks would need to come down. After pondering how to address this installing wooden punches between the fenders and the ceiling above seemed like the best approach. The punches simply consist of 2 x 4’s with foam sanding blocks placed between the punches and the fenders. The foam sanding blocks helped distribute the forces while the rough surface prevented the punches from slipping out of position. In the end this system ended up working really well and allowed for easy adjustment. The closer the strut was moved to the fender peak, the more the fender was pushed downward. 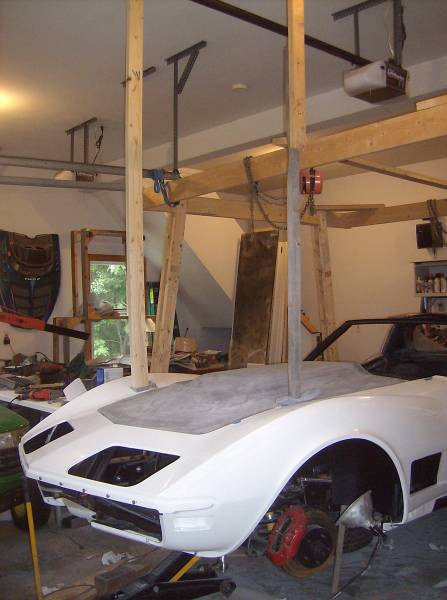 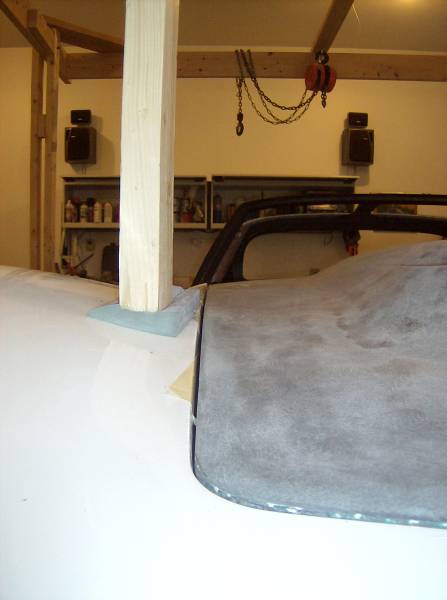 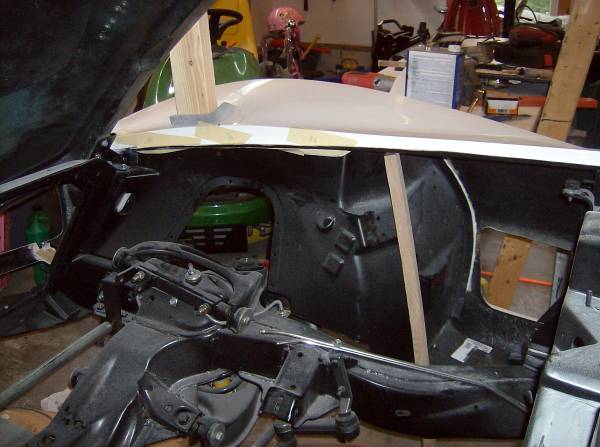 Next, a new splash shield was installed behind each fender skirt. These shields are located the bottom of the fender skirts and bridge the gap between the fender and frame. 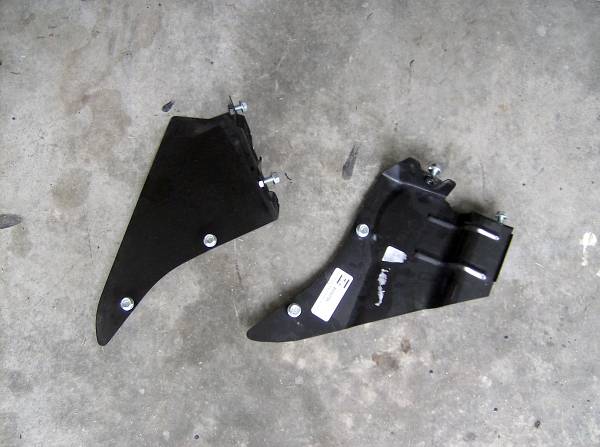 Once the splash shields were in place the alignment of the fenders near the rocker channels started to become more defined. As the fit was fine-tuned several clamps were used to hold the fender skirt in relative position as the fit-up progressed. 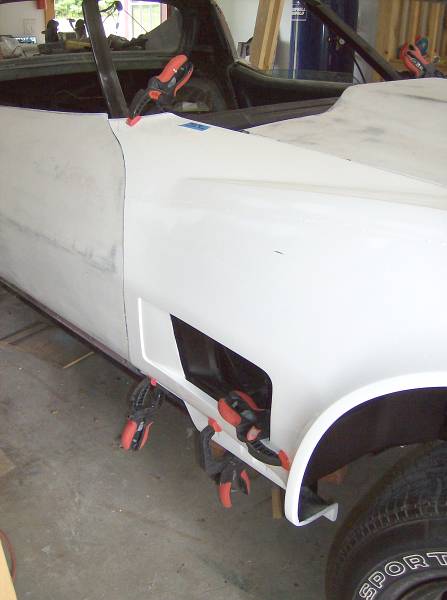 At this point I’m going to provide a lesson learned the hard way. At this point you should test fit the fender grilles. In my case I didn’t. For whatever reason it simply didn’t occur to me that fit-up of the fender could affect how the grills ultimately sit in the grill openings in the fender. It definitely should have but, as they say, hindsight is 20-20. Unfortunately, after adhering everything together I found that both fenders were slightly warped out of planed and didn’t allow the grilles to sit quite flush with the fenders. Thankfully, the difference is fairly minor and can easily be addressed with a bit of body work. But, a bit of foresight up front may have been able to save some aggravation. For what it’s worth, I really don’t know if the fit-up issue could have been resolved had I done the check, but it would have been worth checking ahead of time. After realizing my goof I stripped the paint from the inner fender grilles and gave them a good cleaning. Just be sure not us to sandpaper or other harsh abrasives to remove the paint. The grilles are chrome plated and you don’t want to do anything that will damage the chrome. Otherwise, you’ll leave the underlying steel exposed and end up with rust spots. 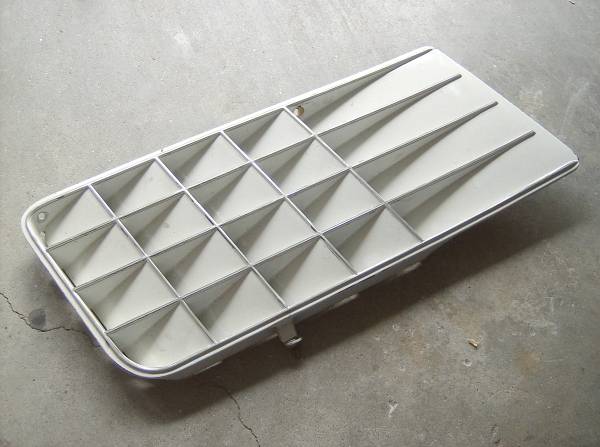 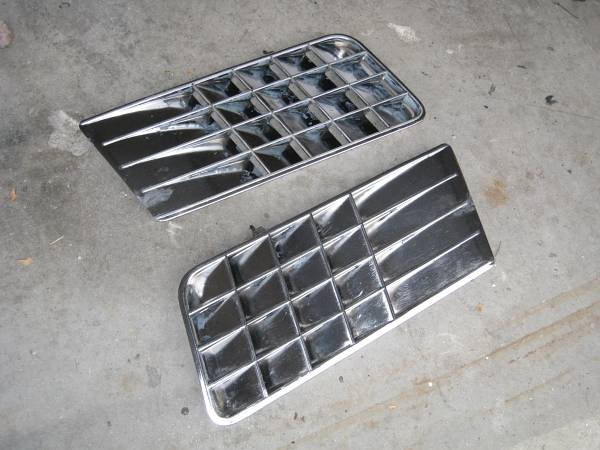 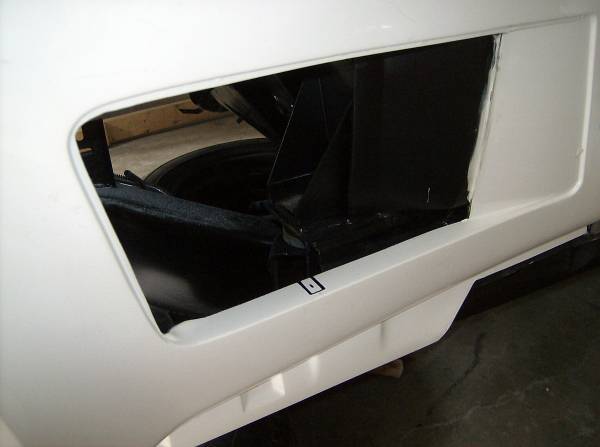 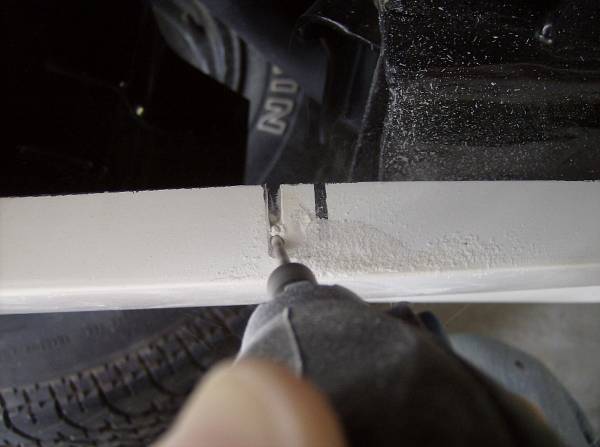 Next, the grilles were installed and adjusted for fit as best as possible (note that this photo was take after everything was adhered together). 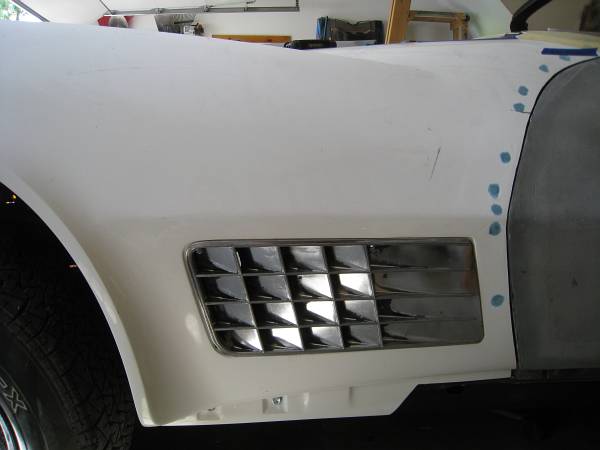 Following fitting the grilles in place the fit of the rocker panel molding should also be checked. Once the rocker panel moldings are installed you’ll be able to see if there’s an even gap between the top of the molding and the bottom of the body along the full length of the rocker panel. Adjustments to the gap can be made by raising or lowering the radiator support assembly. Of course, adjusting the radiator support will throw lots of other items out of adjustment so be sure to double check everything you’ve adjusted previously. Again, in hindsight this should have been checked earlier in the installation process. And, one last bit of hindsight – check the fit of the front fender! Once again, I thought this could be adjusted after the fact, but that turned out not to be the case. After bonding everything together there simply wasn’t enough remaining adjustment in the front fender support to obtain the right gap between the front clip and the back edge of the fender. In my case the entire radiator and fender skirt assembly needed to be moved backward about an additional 1/4 inch. So, unless you want to modify your front bumper bracket make sure you check the fender fit before bonding everything together! After spending hours checking the fit of the front clip it was finally time to start prepping the various parts and pieces to be bonded together. But first, just to recap the work that has been done so far, the following items have been checked and dry fit as part of the front clip installation:

Now it was time to take everything apart and prep for final installation. It seemed a little odd spending so much time putting these parts together only to take them apart, but I made reference marks on everything as the parts were disassembled. I figured this would make reassembly a lot easier.

That’s all for now. Part 3 of the front clip installation should be posted shortly. If you have specific questions regarding this update please stop by the Corvette Forum and post your question. I’m there often and will gladly provide whatever help I can. Lastly, if you haven’t done so already, please Like this project on Facebook to receive additional progress updates and notifications on when updates have been posted.