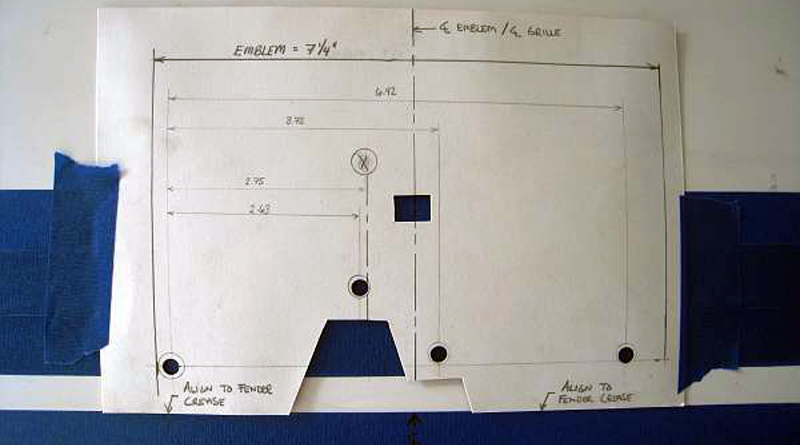 Having finished installation of the new front clip the next item on my Corvette restoration to-do list was to lay out the emblems on the front clip. These include the crossed flags emblem that goes on the nose of the car and the Corvette script emblems that are mounted on the front fenders. This installation effort was primarily to lay out and fit up the emblems before doing any final body work. After all, it’s much less nerve-racking to mark and drill a body panel that hasn’t been painted.

So, I started by reviewing the guidance in the 1971 Corvette Assembly Instruction Manual (AIM). But, I couldn’t find the correct position for the crossed flag emblem anywhere in the manual. Ultimately I did some internet research to find the answer. The correct dimension, measured from where the hood opening comes to a point to where the flag masts cross, should be 10 5/8″. This point also correlates to the centerline of the mounting pins. I then got the spacing between the pins on the back of my nose emblem matched the dimension shown in the AIM. Now that I had both dimensions I was ready to start the installation. 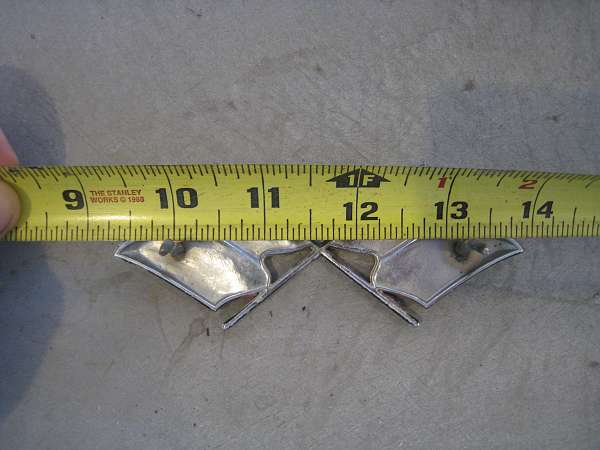 After giving this some thought it became apparent that I needed to define the “crease” in the nose of the hood and then draw a reference line square to the crease line. Ultimately, I decided to place a piece of blue painters tape along the crease by aligning the edge of the tape with the tip of the nose and the valley of the hood cut-out. Before setting the tape in place I pulled it tight so it would form a reasonably straight line between these two points. Then, using a cloth tape, I measured down 10 5/8″ from the valley of the hood cut-out and placed a reference mark on the painters tape. Next, a second piece of painters tape was set in place perpendicular to the first. The center of this piece of tape was roughly aligned with the reference mark I had just drawn. Then, I reestablished the reference mark on this new piece of tape… 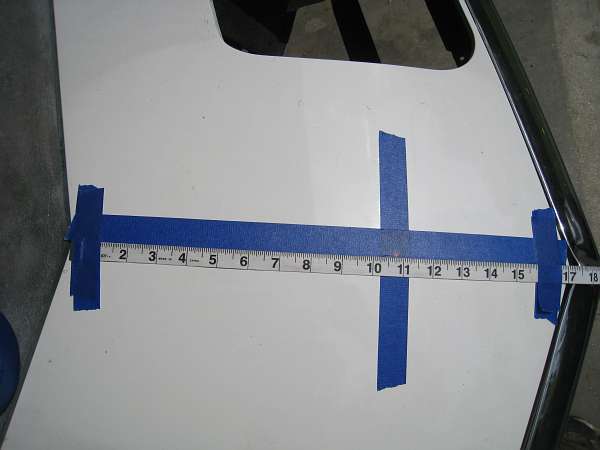 …and used a carpenter’s square to draw a line through the reference mark and perpendicular to the nose “crease”. This new line represents the centerline of the pilot holes for the nose emblem. 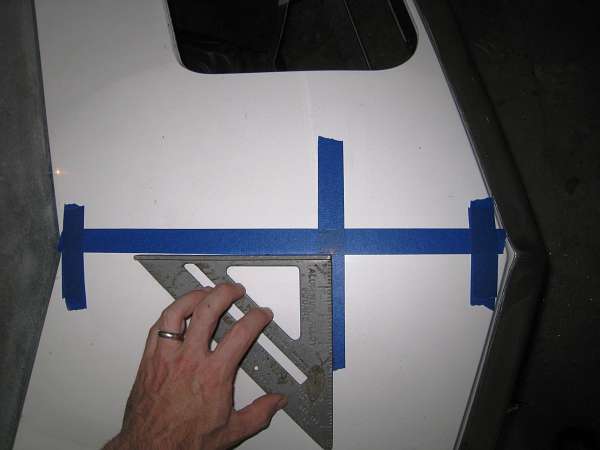 Because I was a bit paranoid about getting the emblem square I decided to double-check that the centerline I drew was square to the front end. To complete this check I created two reference marks along the edge of the hood cut out – one on each side of the crease in the hood surround. A cloth tape was used to measure 2” from the crease and corresponding reference marks were drawn. 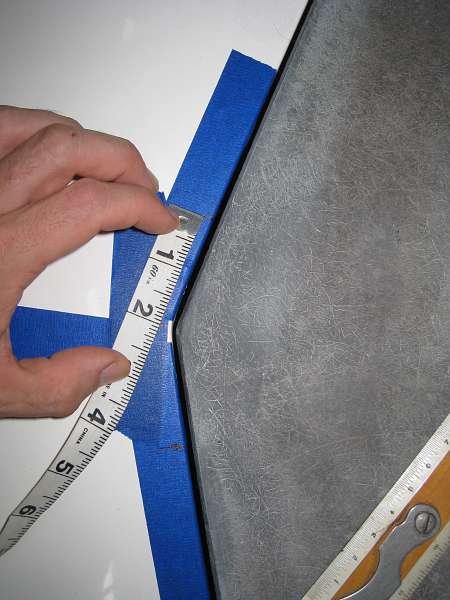 Next, I measured from these new reference marks down to the hood emblem centerline. Both measurements were similar which confirmed the centerline was, in fact, square to the front end. 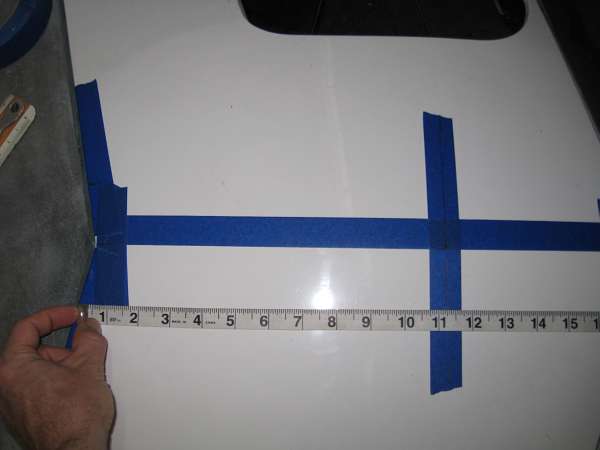 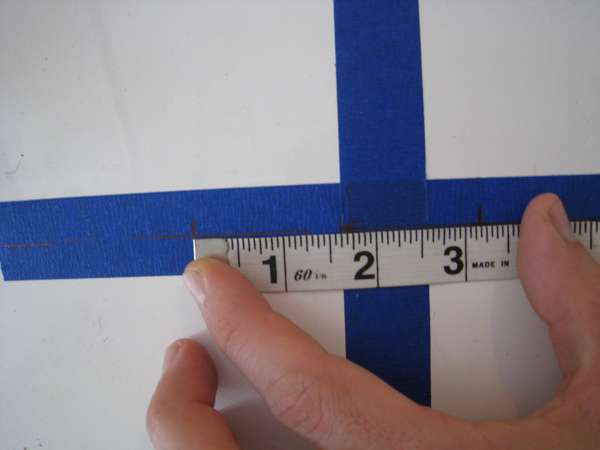 A 5/32” diameter drill bit was then used to create the two holes needed to mount the nose emblem. 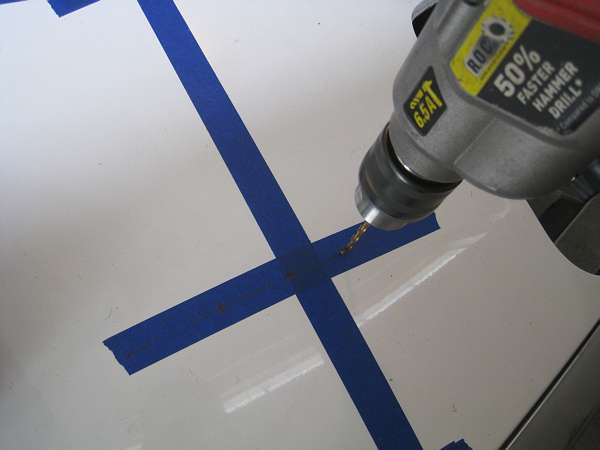 Once the holes were drilled the painters tape was removed… 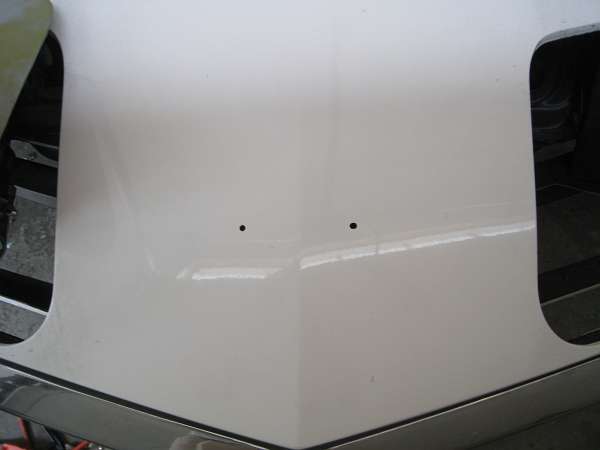 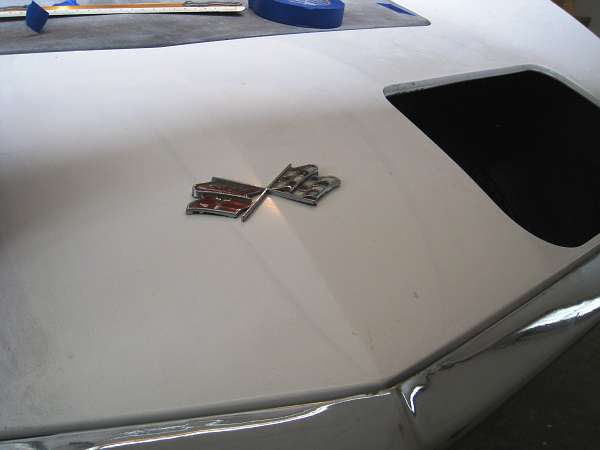 With the nose emblem in place the next challenge was to install the two Corvette script emblems that are mounted to the fenders above the egg crate grilles. Once again I turned to the AIM for guidance on the dimensions required to install the emblem. Here’s a scan of the sheet from the 1971 AIM showing the proper fender emblem location. You can click to see a larger PDF version. 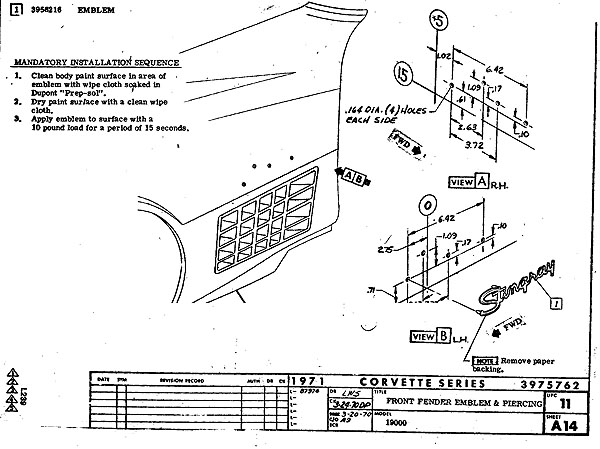 Basically, the “Stingray” script should be centered above the egg-crate grilles and the bottom of the letters (not including the lower parts of the ‘g’, ‘y’, and capital ‘S’) should be exactly 1.5 inches above the center of the horizontal body break line. The vertical reference line shown in the AIM represents the center of the egg-crate grill opening (best I could tell) and the horizontal reference line represents the crease in the fender. 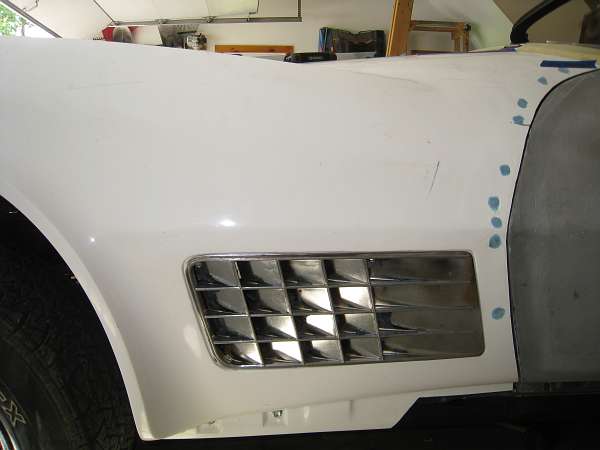 Once again I decided to use my cloth tape and some painters tape to lay out the emblem. Because the AIM showed the location of the pilot holes were dimensioned off the crease in the side fender, the tape was installed using the crease as a working point. In the photo below you’ll note I aligned the 10” mark on the cloth tape with the edge of the grille. This was simply for convenience and I made the necessary mathematical corrections as the centerline of the emblem was laid out. Therefore, the center of the egg-crate grill was at about 13.25″ on the drivers side. 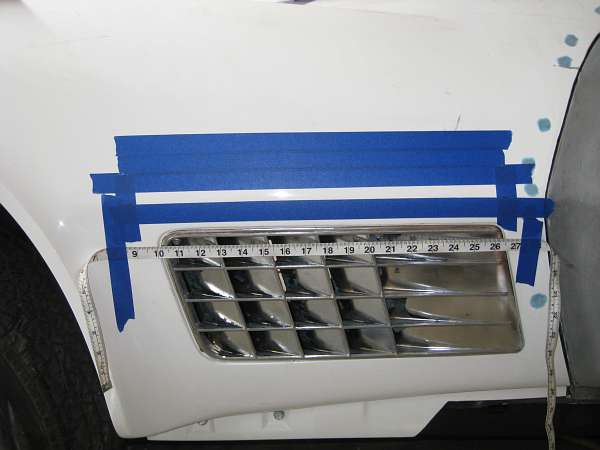 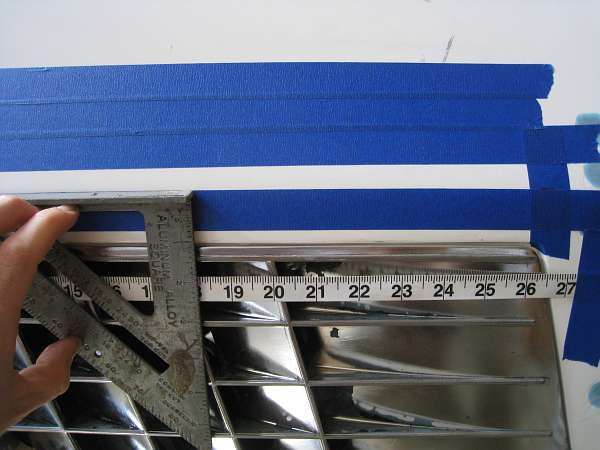 After establishing the centerline of the emblem I set to work creating a template using a piece of paperboard and the dimensions provided in the AIM. This template was created such that its bottom edge would coincide with the crease in the side fender. In addition, I marked the centerline of the emblem so that the template could be easily aligned with the reference line already drawn on the fender. The image below is one of the two templates I created – this one is for the driver’s side. It’s important to note that both sides are completely different – you can’t use the template for both sides. 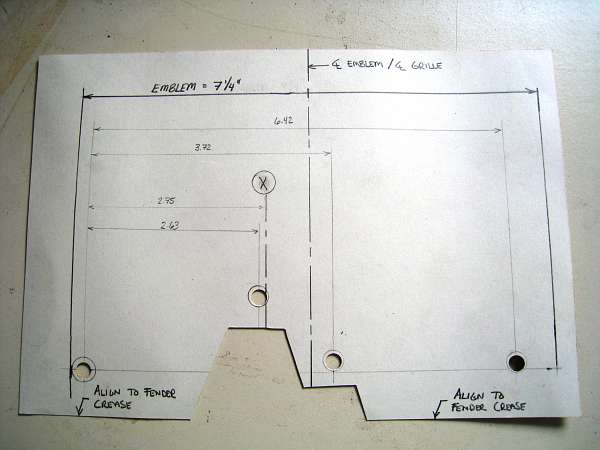 With the template created I used a hole punch to create holes and test fit the emblem to the template. Note that the weird cut-out at the bottom was added to accommodate my hole punch which only had a reach of about 3/4″ or so.

The emblem fit great so I proceeded to position the template on the fender and then marked out the hole locations. 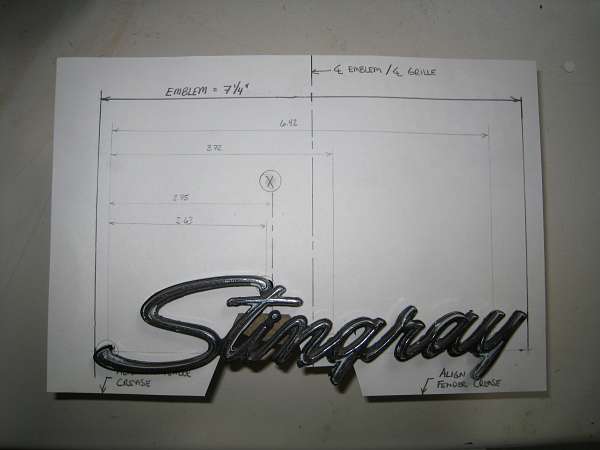 Note that, in the photo below, I added a small “window” along the vertical centerline of the template. This allowed me to see the centerline I had drawn on the fender and verify the template was aligned properly. 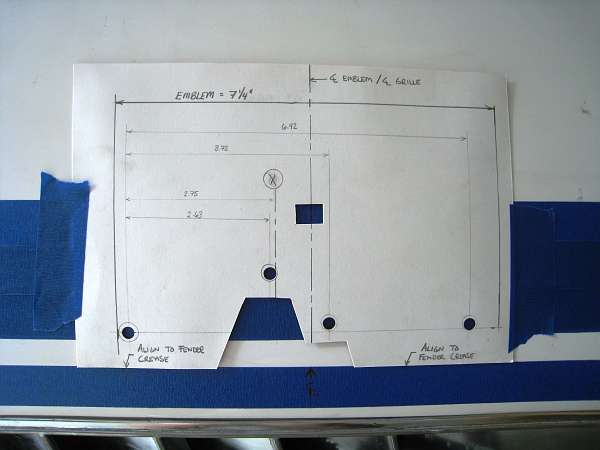 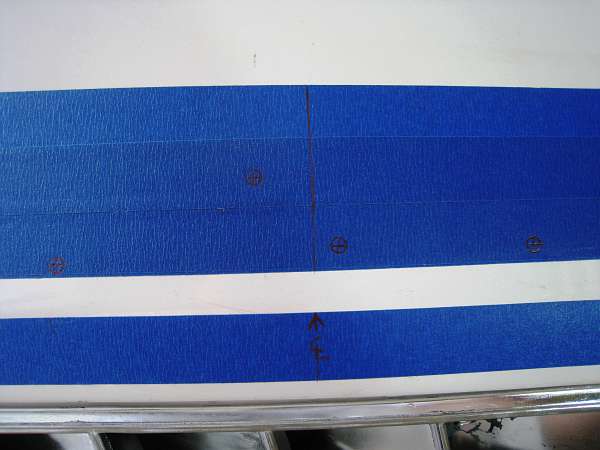 Once the hole locations were marked out a 5/32” drill bit was used to create the necessary pilot holes. 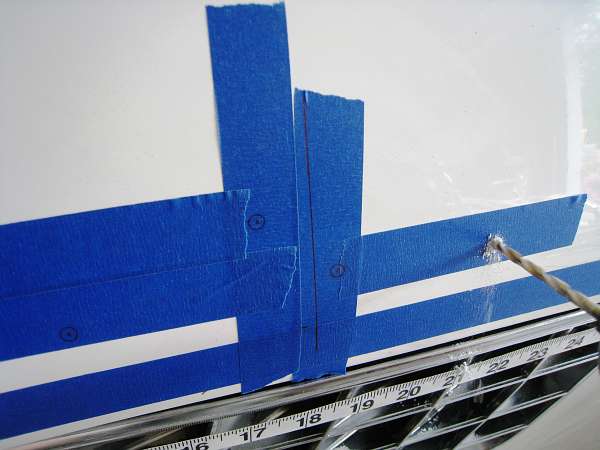 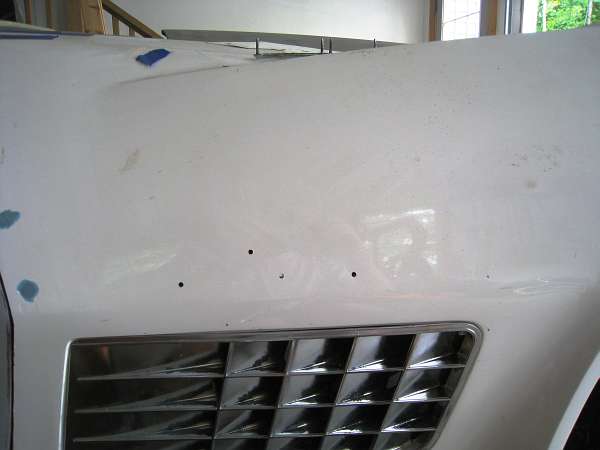 And here it is, the driver’s side script emblem installed and in place. 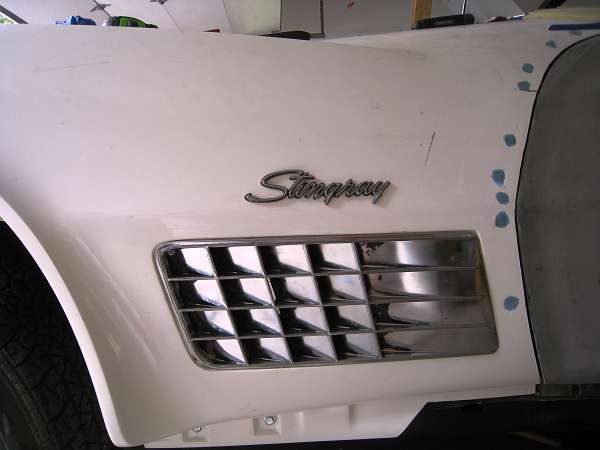 A similar process was completed for the passenger’s side emblem. Here’s the finished result on the passenger side fender. Overall I was quite happy with how all three emblems came out. 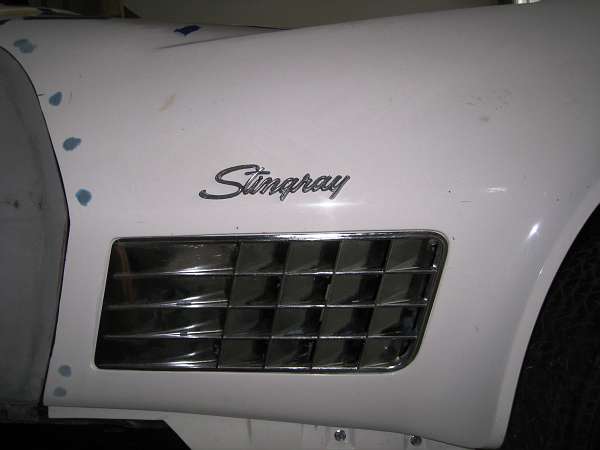 And with that, the installation of the new front clip is virtually complete. With this effort behind me I think my next step will be to clean up and reinstall the wiring and vacuum harnesses within the engine compartment. By doing so I’ll be preparing for the eventual reinstallation of the engine and transmission. It’s really starting to come together now!