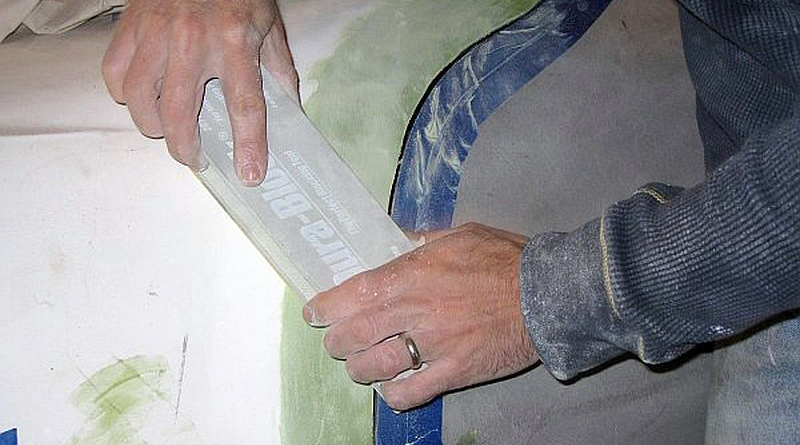 In the last update the final body work on the Corvette began in earnest and the process of applying and sanding body filler to achieve straight, even body lines was described. This installment discusses another important aspect of body work – the techniques and processes associated with achieving perfect door gaps.

To begin the process I started by focusing on the front drivers side door gap. Those who frequent this site may recall that, when the front clip was installed, the fender was roughly trimmed to provide an approximate door gap opening that was a bit tighter than the final condition. In addition, both doors were previously installed and adjusted so the body lines at the top of the door were properly aligned. With these two tasks completed it’s now time to fine tune the door gap. Initially this task can seem like a daunting process. After all, if you mess up you can create a lot of extra work for yourself (or at least an eyesore). However, with some forethought and a bit of care, the process is actually not too difficult. 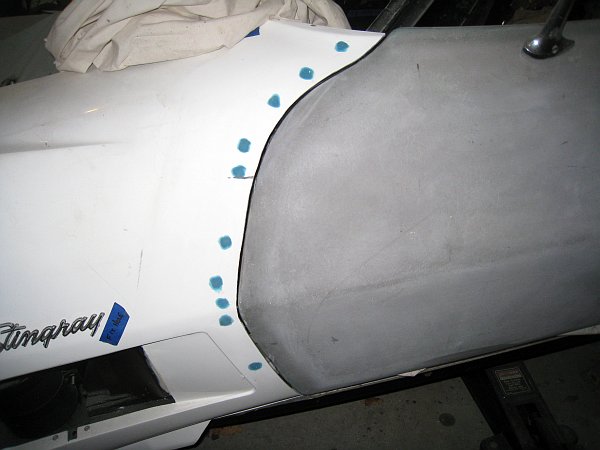 To begin I directed my attention to finishing off the locations where the front clip had been temporarily screwed to the firewall while the bonding adhesive was curing. In these locations the screw holes had been filled with epoxy filler (the blue spots) but the final layer of body filler had not yet been applied. So, I set to work sanding the surface of the clip and epoxy filler with 100-grit sandpaper to provide an adequate surface profile for the body filler to adhere to. 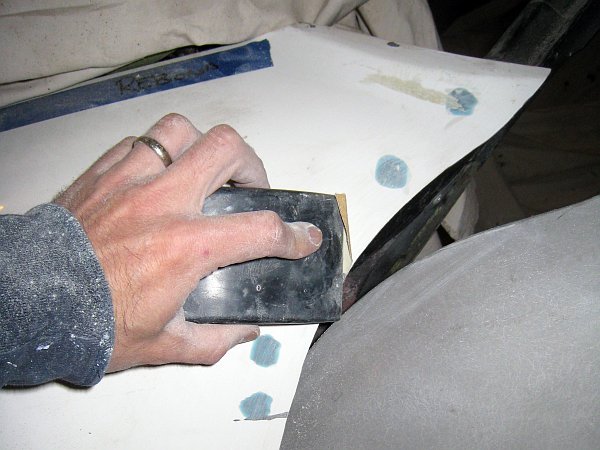 Once the surface was adequately profiled the area was thoroughly cleaned using lacquer thinner and a clean rag, turning the rag frequently. 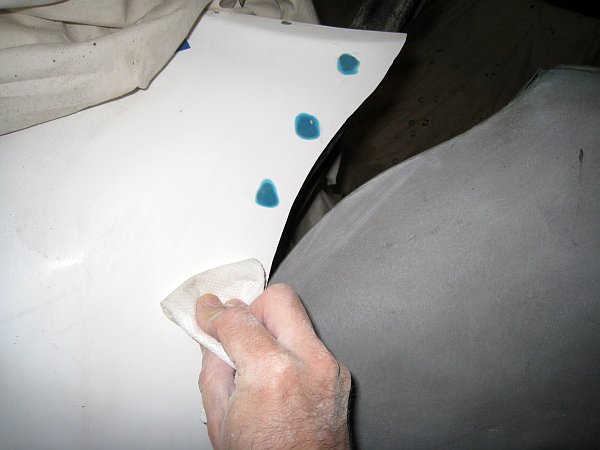 The primary goal of this work is to fill the localized depressions at each screw hole. However, at the same time I wanted to be sure the surface of the front clip is flush with the surface of the door. While care had been taken during the installation of the front clip to ensure the two panels were relatively flush, the application of body filler in this area provided another opportunity to get the two panels as flush as possible. A check with a straight edge found that the two panels were very close to being perfectly flush. However, in one or two areas the door was a bit further out than the fender (fractions of an inch). Therefore, a bit more body filler will be placed on the front fender in these areas to make the two surfaces flush.

So, after briefly thinking about what I hoped to accomplish, I quickly realized that it would be very difficult to layer body filler onto the front fender without also getting it on the door. Therefore, to avoid getting body filler where it wasn’t supposed to be, painters tape was run along the edge of the door prior to the application of body filler. For the same reason painters tape was also run along the opening of the egg crate grilles. 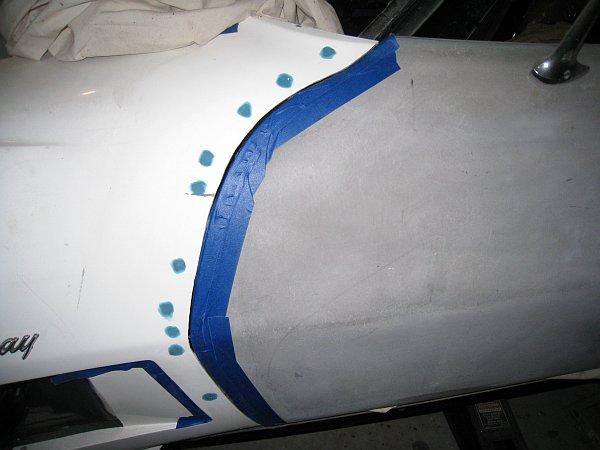 Next a small batch of body filler was mixed up. Similar to the last update I’m using Rage Gold by Evercoat which is a premium lightweight filler that’s easy to work with and sands with minimal effort. More information on proportioning and mixing the body filler is provided in my previous web update. 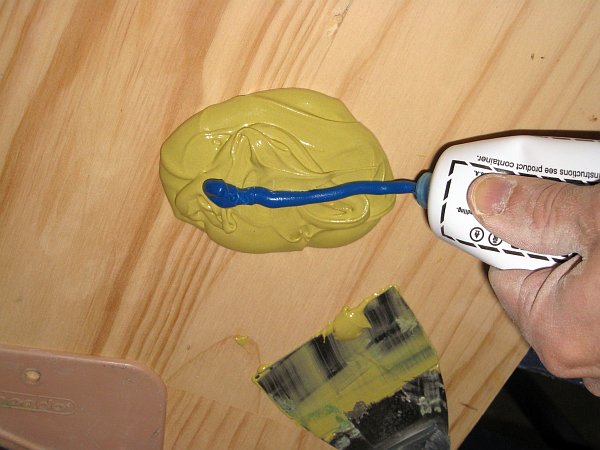 Be sure to mix the resin very thoroughly so it’s one consistent color. Additionally, mix only as much as you can place in about 5 minutes. 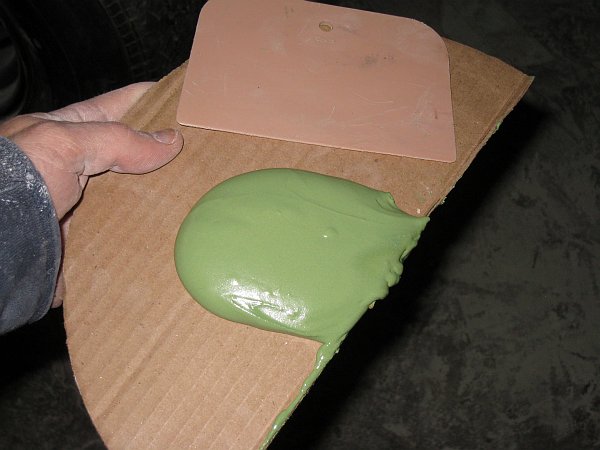 With the filler mixed I used my spreader to apply an even layer of filler over the rear edge of the front clip. I feathered the filler out a short distance to allow it to be blended back into the body panel during sanding.

The painters tape made this process a lot easier by allowing me to quickly apply the filler without worrying too much about getting it everywhere. 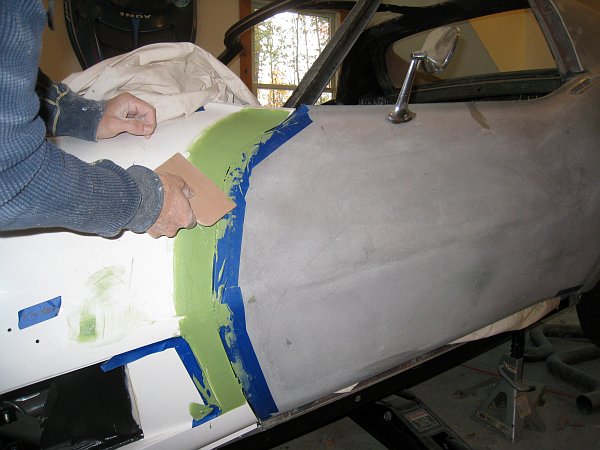 Once the filler had been placed I let it set for about 5 minutes until it began to “kick off” and a soft set had been achieved. At this point the surface was firm to the touch but still a bit tacky. 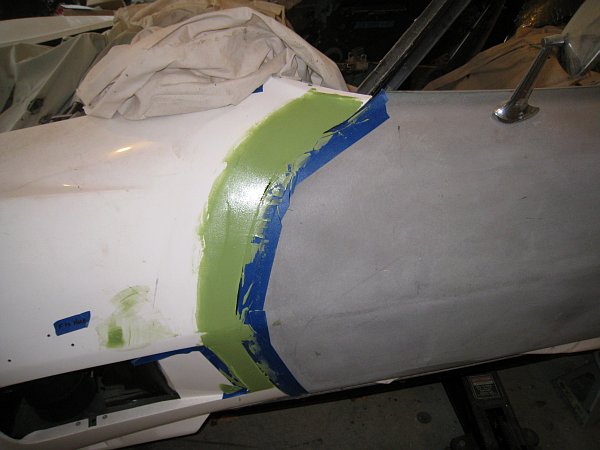 Once this initial set had been achieved the painters tape was removed together with any body filler that was on the tape. It’s important to do this while the filler is still soft. If you wait until the filler has completely hardened the tape is more likely to tear. 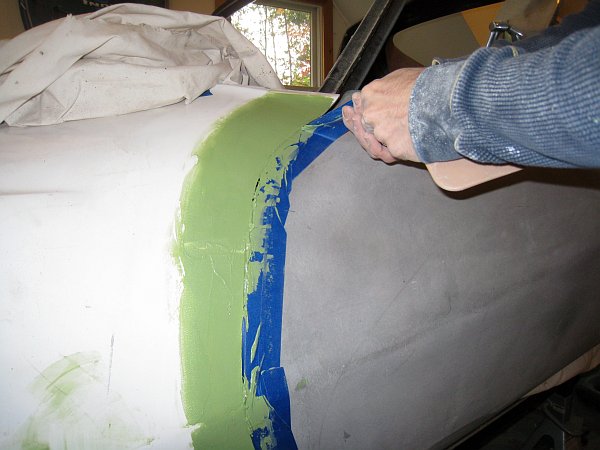 With the tape removed I opened the door and used my spreader to further trim any excess filler flush with the end of the body panel.  Essentially, I removed as much excess body filler as possible while the filler was still soft. Trimming the excess material is much faster and easier than sanding.

Also, it’s important to note here that my goal here is not to extend the length of the front panel, it’s just to build up the surface a bit and to fill in the screw holes. Extending the front panel would have required feathering the fiberglass panel edge and either applying a reinforced body filler or fiberglass matt and resin. In my case I left the front clip a bit long to avoid the need to make any such modifications. 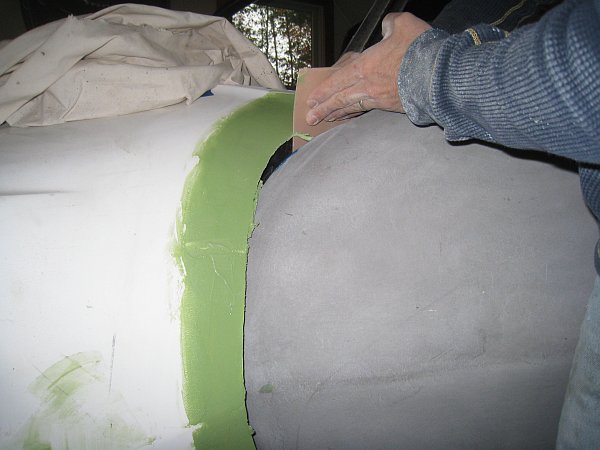 After about 20 minutes the body filler was fully cured so I loaded up my 11” Dura-Block with some sandpaper and got to work sanding the area in an “X” pattern as described in the last update. 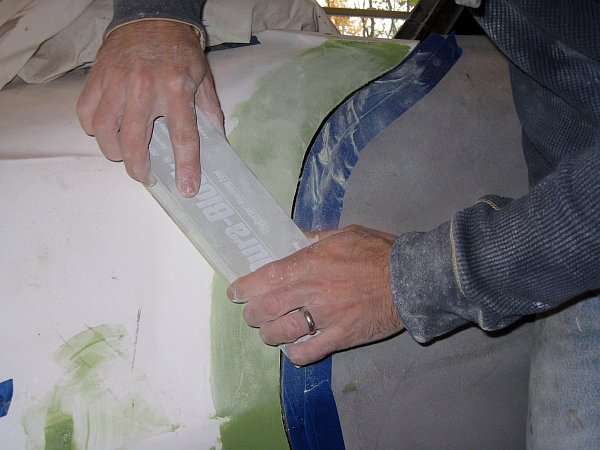 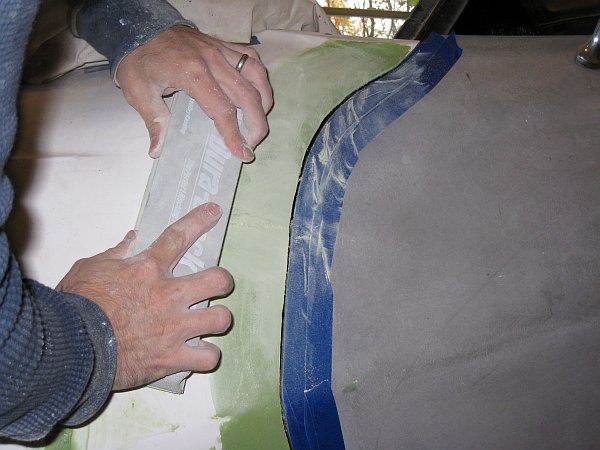 During the sanding process I would occasionally stop and check the “feel” of the panel to identify areas that were uneven or wavy. The best way to do this is by running your fingertips over the area in question with a piece of paper towel or thin cloth between the panel and your bare hand. The cloth increases your ability to sense any unevenness in the body panel. As a final check I also thoroughly wetted the area with some pre-paint cleaner and then visually inspected the panel while holding a lamp close to the surface. By moving the lamp back and forth any uneven areas in the body surface were easily identified by watching for any changes in the light’s reflection.

Ultimately, the body will receive a few coats of high-build sanding primer which will provide one last opportunity to get all the panels perfectly straight. So, while the goal isn’t to get everything perfectly straight at this point, getting the body work as close as practical now will make the remaining body work that much easier. 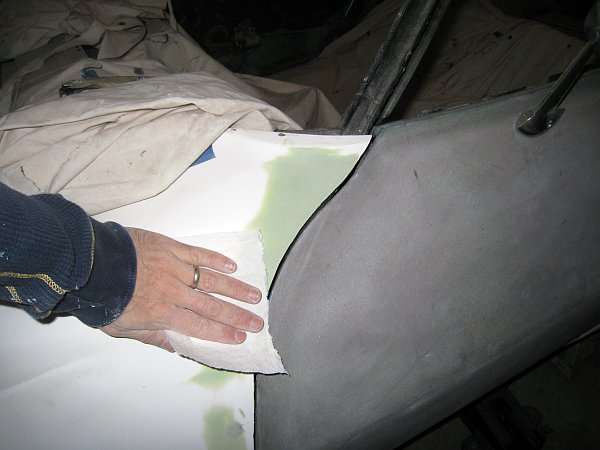 Here’s the drivers side door and front fender after sanding. You can see the edges of the body filler are well blended into the surrounding panel – the feathered edges have a milky appearance. In addition, there’s no perceptible change in the surface profile when I run my hand over the sanded areas and the body panels are essentially flush on either side of the door gap. However, you can see the door gap simply isn’t a constant width along its full length. This will be addressed next. 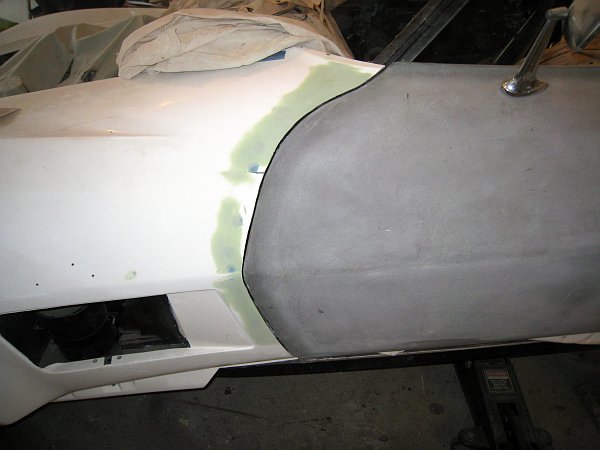 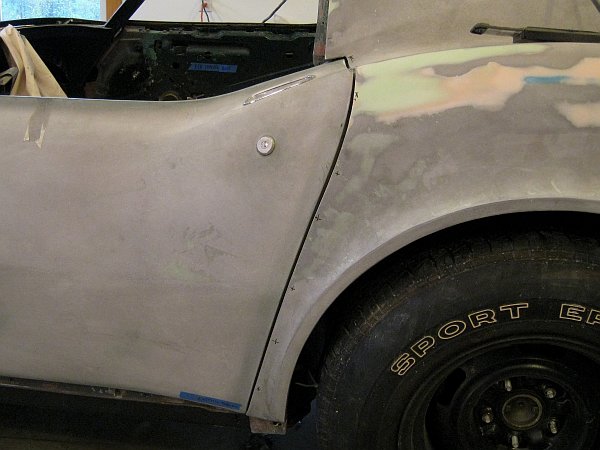 The process of fine-tuning the width of your door gaps sounds like an intimidating process. After all, if you take off too much material you can create a lot of extra work for yourself. However, with a few simple tools and well thought out techniques the process can be quite simple. Here’s how the door gaps on my project car were transformed from an uneven mess to a perfect set of door gaps.

First, start with a few drill bits of varying size, a small putty knife with a piece of self-adhesive sandpaper glued to one side only, and a small to medium sized sanding block. 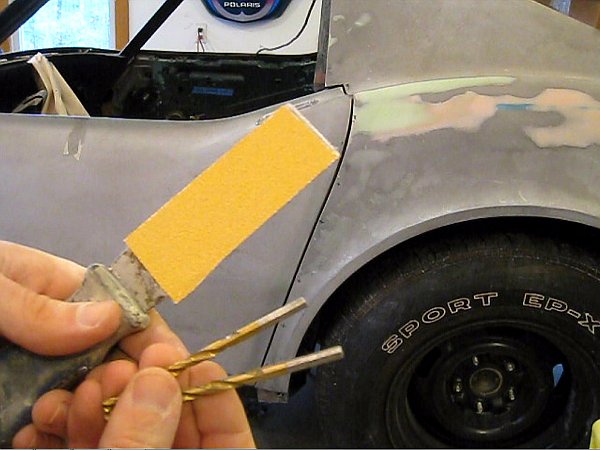 Next, I found the largest area of the rear door gap. In my case this occurred at the location shown below. A 7/32″ diameter bit was just a bit too big to fit in the opening. 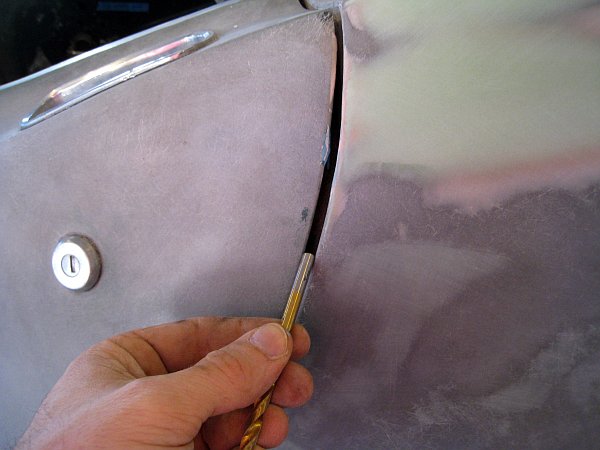 However, a 3/16″ drill bit fit perfectly. And, as it turns out, per the Corvette Assembly Instruction Manual, the stock door gap width for a 1971 Coupe was 3/16″. Perfect!

From here on, I used the 3/16″ diameter drill bit to size the door gap openings for the drivers side door. I’d slide the drill bit up and down the door gap and, where the gap was too tight for the bit to pass, I used my sanding tools to increase the opening. The important thing is to work slowly and carefully – removing too much material will mean you’ve either created a lot of added work for yourself or that you’ll need to increase the size of your door gaps. 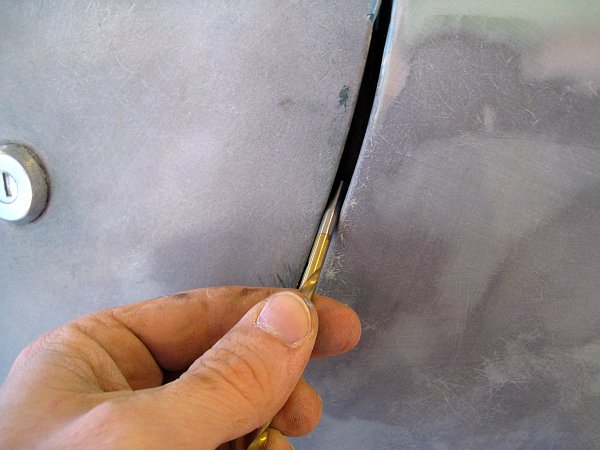 And from here the process becomes very repetitive: measure, sand, repeat. Locate an area where the drill bit gets pinched between the two body panels, make a  few passes with  your sanding tools, and then repeat. I found it was easiest to do most of the minor sanding using the puttyknife since it allowed me to keep the door closed while sanding. 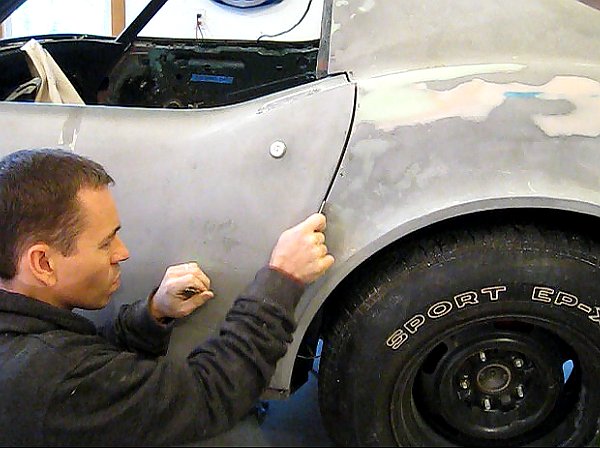 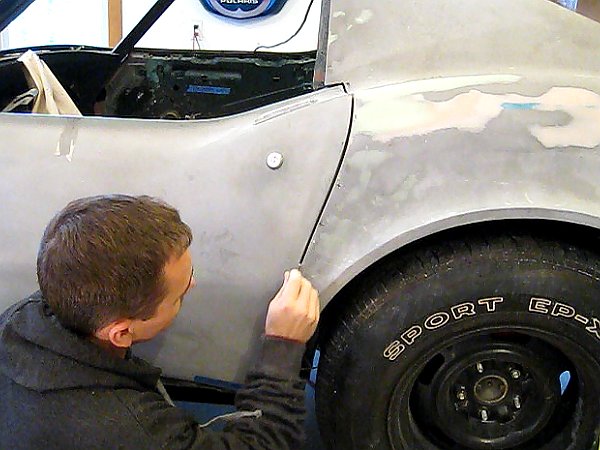 In some areas the gap was quite a bit smaller than it needed to be. In these cases I used a bigger sanding block and opened the door to more quickly remove the excess material. 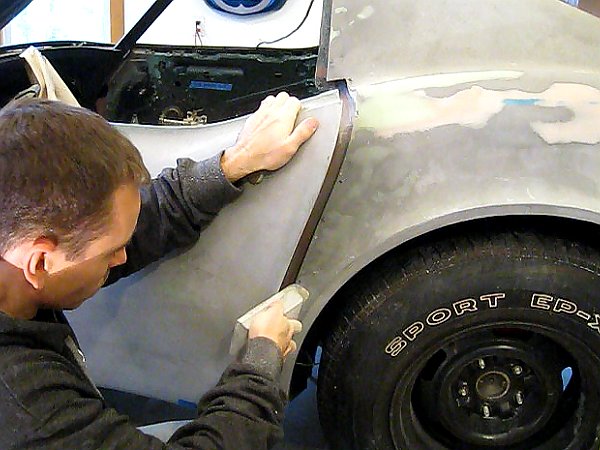 Eventually I had worked from the top of the door all the way to the bottom using this technique. The end result was a straight, even and consistent door gap. 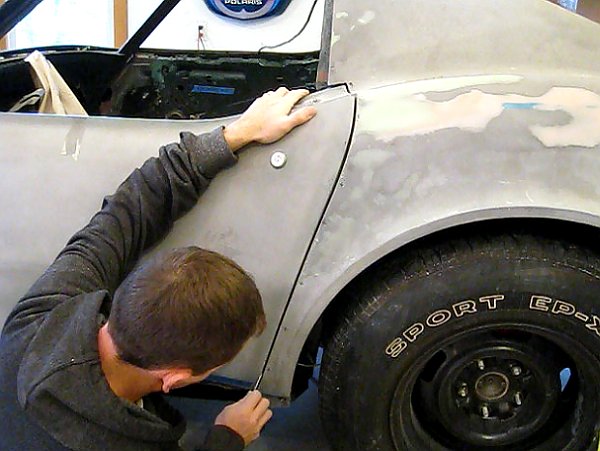 Once the gap was even from top to bottom a soft sanding block was used to make several full-length passes on each body panel. This creates a smoother finished surface and adds a nice radius to each panel. 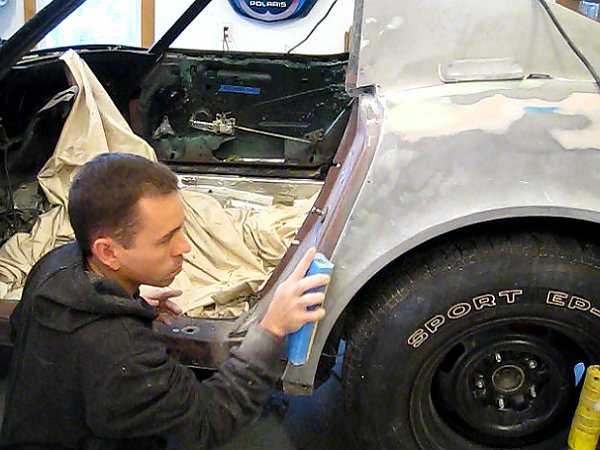 After final sanding one last check of the opening size was completed. Everything checked out and the end result was a straight and consistent door gap from top to bottom. Once this first gap was complete I set to work on the remaining three door gaps. After an afternoon of work the door gaps were all dialed in and came out looking great! 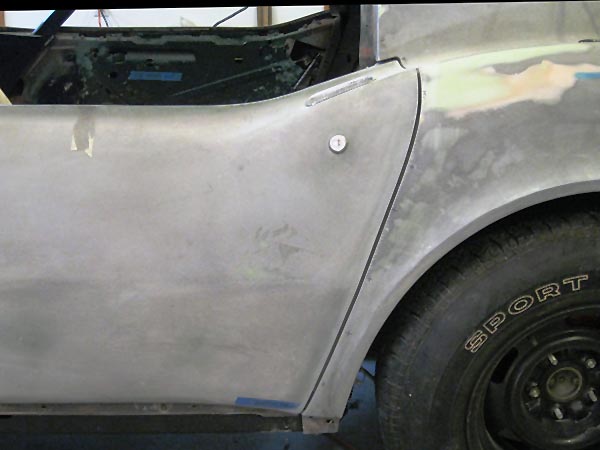 And there you have it, the process of fine-tuning door gaps. As part of this process I also created a two minute time lapse video of my efforts to adjust the the rear driver’s side door gap.

Well, that’s it for this update. I’m going to continue the process of wrapping up some of this body work over the next few months so expect more updates!

If you have any questions about this update, or a project you’re working on, I encourage you to visit the Corvette Restoration Forum and ask your question! I’m there fairly often and, together with the other great forum members, you’re sure to get some great feedback.